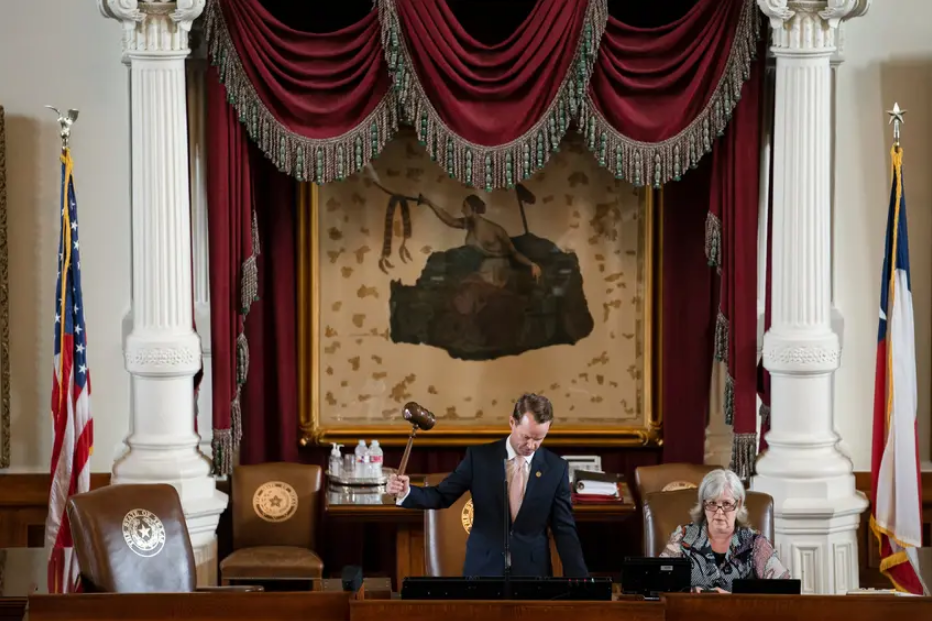 When Texas House Democrats skipped town Monday in an attempt to prevent the passage of a GOP priority bill on voting restrictions, they also imperiled a slew of other divisive Republican measures that had been expected to pass in the special legislative session that began last week.

Bills to restrict pretrial release from jail, ban the teaching of critical race theory in schools and prohibit transgender public school students from competing on teams that correspond with their gender identity were up in the air after dozens of Democratic lawmakers chartered flights to Washington, D.C. But their departure also left in jeopardy more widely supported measures, like giving more money to retired teachers and restoring vetoed funding for more than 2,100 legislative employees who could potentially go without paychecks starting in September.

The move brought widespread criticism from Republican state leaders and conservatives nationwide. Gov. Greg Abbott threatened to continue to bring lawmakers back for 30-day special sessions until they vote on his priority issues, like voting and bail restrictions.

“Texas Democrats’ decision to break a quorum of the Texas Legislature and abandon the Texas State Capitol inflicts harm on the very Texans who elected them to serve,” Abbott said in a statement. “As they fly across the country on cushy private planes, they leave undone issues that can help their districts and our state.”

He specifically noted that the Democrats’ departure hindered the passage of more money for retired teachers, foster care and law enforcement but did not mention the more controversial conservative measures.

But Democrats across the country and advocates for civil rights and racial justice celebrated the quorum break Monday that could potentially block the voting legislation. And many also praised the chance to stop other measures on the GOP-driven special session agenda.

“From the beginning, the governor designed this special session to suppress Texans’ civil liberties,” Sarah Labowitz, policy director of the American Civil Liberties Union of Texas, said in a statement, listing bills on voting, bail, abortion and transgender athletes. “The walkout is a drastic action in direct response to the governor’s refusal to listen to his constituents or address the real needs of Texans.”

Last month, Abbott vetoed funding for Texas’ entire legislative branch in retaliation against Democrats who walked off the House floor in May to block voting legislation in the regular legislative session. This month, the Republican governor put the onus on legislators to add back the funding in the special session — during which lawmakers have 30 days to pass measures specifically assigned by him — seemingly as a way to discourage Democrats from again leaving their post.

Under House rules, at least two-thirds of its 150 members must be present for the chamber to take any action. At least 51 of the 67 Democratic representatives left Texas Monday without plans to return before the special legislative session ends Aug. 6, potentially preventing the passage of any bills in the current session.

“We were elected to represent our constituents and fight for our constituents’ interests,” state Rep. Chris Turner, chair of the House Democratic Caucus, said after landing in Washington on Monday night. “We aren’t going to sit in Austin in the House chamber and watch the Republican majority steamroll the voting rights of our constituents.”

Aside from voting, a key Abbott priority for the special session was changing Texas bail laws, with the aim of keeping more criminal defendants deemed dangerous behind bars. Proposed bail bills, similar to failed legislation from the regular legislative session and approved by House and Senate committees Saturday, would change how and if people can be released from jail before their criminal cases are resolved while they are still legally presumed innocent.

Although some provisions of the bills are widely supported, like one that would provide extra training to court officials who set bail and ensure they have information on defendants’ criminal history, major pieces have been slammed by House Democrats and civil rights advocates. They argue the bills would lead to mass detention of poor people while wealthy criminal defendants would still be able to walk free.

On Monday, bill author state Sen. Joan Huffman said Democrats walking out on the Legislature could prevent vital bail reform as the state endures a public safety crisis. Many Republicans and crime victims have pressed the need to revise state law by citing rising crime rates and numerous violent crimes allegedly committed by people who had been released from jail on bond.

“Since the Legislature adjourned sine die, at least five people in Harris County alone have been killed by individuals out on multiple bonds,” said Huffman, a Houston Republican. “These people were victims of preventable crimes, and we have a responsibility to stop tragedies like this from happening again.”

According to Harris County court records, at least three of the defendants in those cases were out of jail after having paid for cash bail, which would not have been prevented under the legislative proposals.

The current legislation, Democrats argued, would increase a reliance on money bail by banning the release of those accused of many violent or sexual crimes on bonds that don’t require cash. Those accused of such crimes could still bail out if they had enough cash. The bills would also restrict charitable groups’ ability to pay to get people out of jail.

Such groups became well known for posting bail for protesters after a Minneapolis police officer murdered George Floyd. One also posted the $100,000 bail set for Hervis Rogers, who was recently arrested on orders from Texas Attorney General Ken Paxton and accused of illegal voting in Houston. On Monday, representatives for nonprofit bail groups in Texas and nationwide said they supported Democrats using all the tools available to them to stop the bail bills.

“[The Texas bail bills] are the most regressive bills that we see in the country right now,” said Twyla Carter, national policy director at The Bail Project. “Charitable bail funds are the communities’ response to mass incarceration. It is community members and community-based organizations that come together and work together to bail people out who cannot afford to buy their freedom.”

Besides bills on voting and bail, other Republican priorities that are now in danger during Abbott’s 30-day session include efforts to stop social media companies from blocking users for their viewpoints, limiting pill-induced abortions and adding money for policing efforts at the Texas-Mexico border. But the governor also tagged lawmakers to tackle less-partisan issues — like adding funds for foster care, property tax relief and retired teachers. On Monday, he slammed Democrats for leaving those on the table.

One piece of legislation would provide what is known as a “13th check” to retired teachers across Texas. The bills would direct the Teacher Retirement System of Texas to distribute a one-time supplemental payment of up to $2,400 by January of next year.

Committees in the House and Senate unanimously advanced the legislation Friday in some of the earliest committee votes of the special session.

“I think there are mixed feelings,” Lee said of the potential demise of the 13th check proposal due to Democrats leaving the state. “I think that educators care about voting rights, educators care about the truth, they care about working together and compromising and listening — so that’s what they hope both sides of this policy spectrum will ultimately yield, that people will work together.”

As far as legislative employees — who earn a median salary of $52,000 per year — some staffers and a legal representative said there may be other ways to pay the employees of elected officials and those who help all lawmakers write bill drafts and provide cost estimates for legislation.

Lawmakers could potentially roll over money from the current fiscal year, if they have any, to pay their staffers. Or the Texas Supreme Court may rule in favor of the employees and House Democrats in a lawsuit arguing Abbott’s veto was a gubernatorial overreach. And Abbott has used his emergency power to move money around before, as he did by directing the transfer of $250 million from Texas prisons to a border wall down payment.

For Odus Evbagharu, chief of staff to state Rep. Jon Rosenthal, D-Houston, the onus to restore his and his colleagues’ wages is on Abbott.

“I don’t believe it’s on the House Democratic Caucus to answer for that. I think that’s going to be an answer that Gov. Abbott’s gonna have to answer himself,” Evbagharu said. “My best guess is you hope he doesn’t further punish staff for decisions that lawmakers are making.”

Still, State Rep. Barbara Gervin-Hawkins, D-San Antonio, said Monday she is hopeful but wants her employees to be prepared.

“I told my staff to get ready for unemployment,” she said.

This article was originally posted on To block voting legislation, Democrats put bail bills, legislative funding and other measures in peril