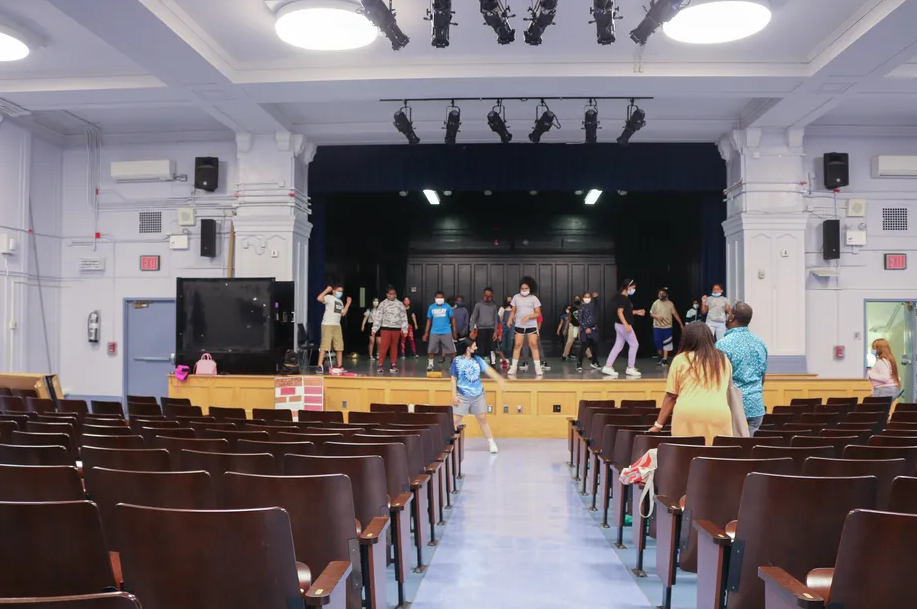 In the brightly lit library at P.S. 382/M.S. 447 Creston Academy in the West Bronx, middle schoolers excitedly jostle around a camera to record interviews of each other.

Across the hall, in the cafeteria, elementary school students draw self-portraits in quiet concentration.

In the auditorium, hip hop thumps as rising middle schoolers on stage try to keep up with a fast flowing dance routine.

Each of these moments requires a logistical feat of scheduling. Every day, Good Shepherd, the nonprofit that helps run the summer school program at Creston Academy, is faced with a fresh challenge of finding enough staffers to serve almost 200 elementary and middle school students at the site. Behind the scenes, it is often a scramble that relies on a rotating cast of substitutes, larger class sizes, and an all-hands-on-deck approach.

“The children have no idea we’re in sheer chaos,” said Gary Adams, the site director at Creston Academy.

Facing two school years disrupted by the COVID pandemic, and with most students not stepping foot in a school building for all of this past academic year, New York City dramatically expanded access to summer school this year. Summer Rising, which started at the beginning of July, is open to any student who wants to attend. Half of the day is focused on academics and helping students make up for lost learning time. The rest of the day is like a summer camp, geared toward reconnecting with peers and shedding stress after a long period of isolation and loss.

More than 200,000 signed up for the program — roughly the size of the entire Orange County school district that encompasses Orlando, Florida. The camp portion of the day is run by nonprofits like Good Shepherd, who have raced to hire enough staff to meet demand. A backlog in the education department’s fingerprinting division forced the city to allow workers from nonprofits to start before getting the clearances typically required to work with young people.

At Good Shepherd, Chante Brown, who supervises Summer Rising sites across the Bronx, said the nonprofit’s chief pulled out an organizational chart and told the staff that anyone who had the proper background checks would be in a classroom.

That’s how Brown wound up in charge of a rambunctious group of kindergartners on the first day of Summer Rising. Adams filled in for a salsa class for the first week.

“We had to do what we had to do,” he said. “We had kids lined up who hadn’t registered, who wanted to register. And we said, ‘Ok, sure.’ …We did not turn a soul away.”

Every day since has been like solving a new staffing puzzle. The education department has told providers to make room for any student who wants to attend. On Tuesday, a parent dropped off a new student at the school entrance and left. The child wasn’t even enrolled. Two weeks into summer school, the Creston Academy site is still taking on new students.

Good Shepherd has made it work with a core of veteran staff like Clem Harris Jr., who leads the art classes. He has been teaching in the summer program for more than a decade, works as a paraprofessional at Creston Academy during the academic year, and has a passion for drawing cartoons.

The art class meets in the cafeteria because it’s more spacious than a classroom. Camp leaders are used to class sizes of around 10-15, but Harris has 24 students in his care after the education department increased the allowed ratios to account for staffing shortages across Summer Rising this year. The long lunch tables give more space for social distancing. On a recent afternoon, Harris wandered from group to group, offering words of encouragement as soft music played and the students sketched in pencil.

“We’re here to learn,” he told the students. “It’s not about doing it perfectly, girls and boys. There’s no such thing.”

A substitute school aide hovered nearby, ready to provide extra help if needed. But on the next floor, in the gym, the instructor was alone as he led about two dozen students in a basketball competition. Shrieks of excitement echoed off the walls as teammates raced to make baskets within a set amount of time. The aide for the class was on break, leaving the lone instructor to do it all. He led a countdown at the front of the court, kicking off a round of frantic shooting, and then sprinted to the back of the court to keep an eye on groups of students sitting on the gym floor, waiting patiently for their turn.

Good Shepherd is still waiting for a handful of paraprofessionals, who work with students who have disabilities, to be assigned to the Bronx sites. Sometimes when substitutes do show up, their schedule allows them to leave before the program ends. Adams is lucky to have another Summer Rising site run by Good Shepherd within walking distance, and the two directors can send and receive backup help between them.

The staff find their own ways to do the jobs of multiple people. On Tuesday, Adams hustled upstairs to help with a transition between classes, but the group leaders already had it covered by the time he arrived. The instructors stood in their doorways, with one eye on their classrooms and another on the hallway, as students filed in.

Brown, the Bronx supervisor for Good Shepherd, wishes she could pay her staff more. Most are making under $20 an hour, and most positions are only part time. Higher pay would make recruitment easier at a time when many nonprofit workers are burned out.

“That would bring more people. Here, we’re lucky, we have people who are in love with what they’re doing,” Brown said. “But we could get more of that, because the hiring process has been super hard.”

Summer Rising staff are meeting the challenges in spite of many last-minute surprises. The Creston Academy team learned just two days before their first Friday there would be no instruction that day of the week, leaving the nonprofit to come up with a full day of programming. That first Friday, without enough staff on hand, they packed the students into the cafeteria, where there was room for social distancing, and played a movie during the hours that they were short staffed.

“My fear is having a bunch of kids in a space and they’re not doing anything,” Adams said.

Referring to Summer Rising, he said, “It’s a great concept.”

“But it could have been done smarter,” added Brown.

This article was originally posted on To keep Summer Rising running at one Bronx site, each day brings a new staffing puzzle