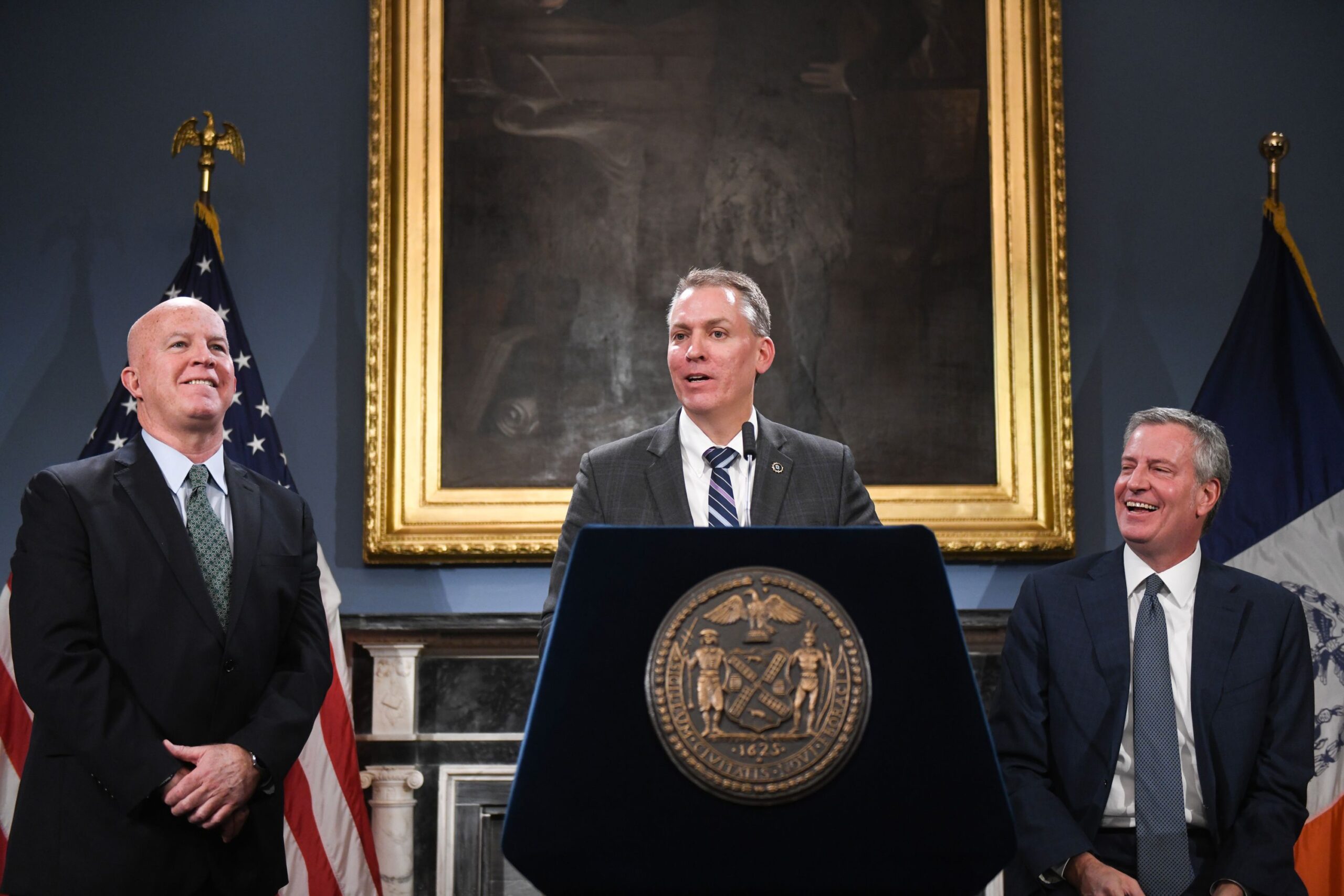 NYPD Commissioner Dermot Shea, who defended overturning a disciplinary verdict against a cop cited for shoving a funeral-goer into oncoming traffic on Madison Avenue, released a video yesterday that captured the officer in the act.

The video was made public after Mayor Bill de Blasio responded to THE CITY’s report documenting 43 cases since 2017 in which Shea and his predecessor, James O’Neill, altered the punishments or erased the guilty findings of NYPD trial judges.

One of those cases involved Lt. Kevon Sample, who was found guilty after NYPD trial judge Nancy Ryan ruled the cop had “wrongfully used force” in pushing the civilian into traffic “without police necessity.” She recommended that he be reprimanded for the incident, which occurred outside the Upper East Side wake for rapper Prodigy.

But in a December 2019 edict, Shea overruled Ryan, declaring Sample “not guilty” and voiding all punishment.

Questioned about THE CITY’s report on NY1 Tuesday, Shea responded, “If you look at that article and if you look at the video, there’s a lieutenant who has an individual in the middle of the street and he won’t get out of the street. He didn’t push him hard. He didn’t hit him. He basically did what I would tell him to do tomorrow and that’s why I withheld’ approval of the trial judge’s decision.

The incident took place the afternoon of June 29, 2017, where a large crowd had gathered to honor the Mobb Deep rapper. Sample and other cops were trying to clear out the area as the wake ended when one unidentified man refused to move.

During the NYPD trial, the man testified that he was angry at being ordered around by cops. He said that Sample warned him he would push him into the street “and he did not care if traffic was moving,” according to the trial judge’s ruling.

Late Wednesday, the NYPD tweeted video of the altercation, several hours after de Blasio said, in a response to a question by THE CITY, that it should be made public.

In the recording, Sample is seen taking the man by his elbow as the man stands next to a car stopped on Madison Avenue. During the NYPD trial, the man testified the car had to jam on its brakes to avoid hitting him. But the video begins after that car apparently had already stopped.

The lieutenant then begins pushing the man across Madison Avenue into the oncoming traffic. A yellow cab and another car are forced to halt in the middle of the crosswalk as Sample shoves the man in front of the vehicles.

The lieutenant continues to push the man until he reaches the other side of the street. Sample is trailed by two uniformed patrol officers, and cars beep as the cops cross in front of them.

On the corner, a “DO NOT WALK” sign is lit up. Someone could be heard screaming “What are you doing?” and a man repeatedly says “Record that s—t!”

It’s not clear who took the video and an NYPD spokesperson did not respond to questions about its source. The department also put up a second video attributed to TMZ that captured another angle of part of the scene.

Once on the sidewalk, the man “exchanged words” with another officer and was placed under arrest, according to the trial judge’s decision. The charges were later adjourned in contemplation of dismissal, which means they would be dropped if the defendant stayed out of trouble for a certain amount of time.

The trial judge noted that, during his testimony at trial, Sample said he “was not worried about vehicle traffic ‘because I’m taking him across the street and I’m going with him.’” But she also noted Sample acknowledged he didn’t know whether the light was red or green, and conceded he was aware cars were moving when he pushed the man into the street.

In finding Sample guilty of “unnecessary police action,” she conceded the cop used an “acceptable level of force” in pushing the man, whom she pointed out was uncooperative with police.

But she stated: “It is clear that traffic is moving on Madison and that the Do Not Walk symbol is lit up.”

“The complicating factor in this case,” she added, “is that the traffic was moving at the time.”

The judge concluded that while the man needed to be directed out of the area, “there is nothing in the record to indicate he had to be pushed at the precise time that traffic was moving.” Shea, though, ignored her recommendation that Sample be reprimanded.

‘An Acceptable Level of Force’

In releasing the video, the NYPD tweeted, “The video demonstrates the officer used an acceptable level of force and that traffic was moving at an extremely slow pace, and at no time was the individual in any danger of being struck.”

THE CITY found multiple examples in which Shea and O’Neill changed the final punishment of cops deemed guilty of misconduct by NYPD trial judges, and in five cases simply voided the finding of the judge. In one such reversal, O’Neill nixed the guilty verdict against a cop the trial judge found used a prohibited chokehold on a man during an arrest.

Under the current system, the police commissioner has final say over all misconduct cases. Critics of this loophole want that power taken away and given to an independent authority.

Shea contends that removal of that authority would take accountability for police misconduct away from the commissioner.

In the wake of THE CITY’s report Sunday, two Albany legislators announced they’d sponsored a bill to place the final say in the hands of an independent hearing officer who is not an NYPD employee. Under the measure, the police commissioner also would no longer be able to reverse the findings of the Civilian Complaint Review Board, the independent body that prosecutes misconduct cases in the NYPD trial court.