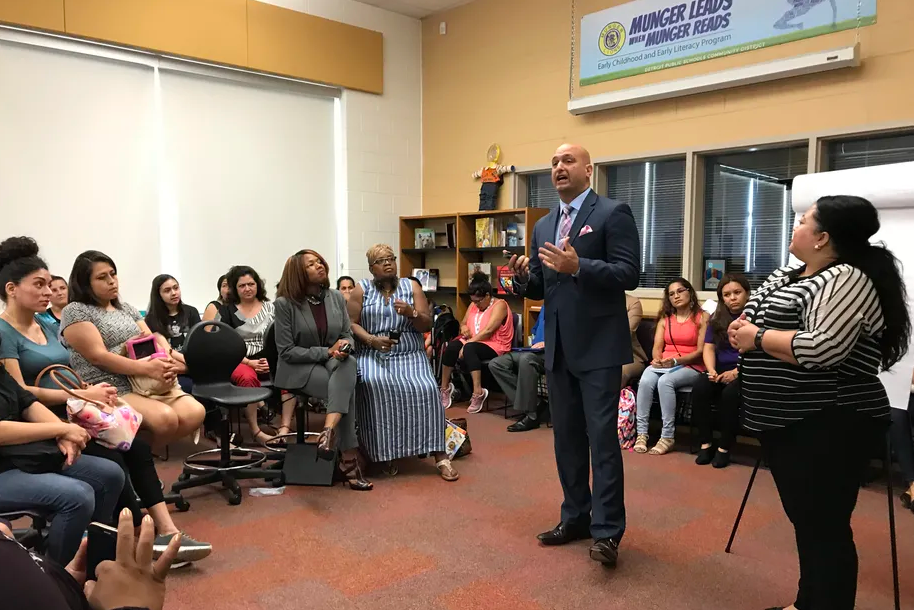 The Detroit school board is backing Superintendent Nikolai Vitti as he enters his fifth year at the helm of Michigan’s largest school district.

Vitti won high marks on his annual board evaluation for coordinating the district’s outreach to families during the pandemic, creating “bold” COVID safety protocols, and helping improve literacy instruction in the district.

“He’s been extremely focused, satisfying and diligent in working for our students and staff,” Deborah Hunter-Harvill, board vice president, said in a statement. “He still mesmerizes me with his deliverables. For such a time as this, he is the one.”

Angelique Peterson-Mayberry, board president, praised Vitti and said the board had asked him to focus more heavily in the coming year on the district’s 20-year plan for its facilities and on improving the district’s new fully virtual school.

The board finalized Vitti’s evaluation in a closed meeting, which is standard for discussing employee evaluations. Chalkbeat requested a copy of the written evaluation but didn’t receive it by Wednesday evening.

The board evaluates Vitti based on the district’s progress on enrollment, attendance, and academic achievement. The district’s test scores improved marginally during Vitti’s first years on the job, and chronic absenteeism fell, but progress on those metrics has stalled due to the pandemic.

The board’s support for Vitti does not come as a surprise less than a year after the panel extended his contract through 2025, making him one of the longest-serving superintendents in the district’s turbulent recent decades. The contract set Vitti’s annual salary at $312,000 and said he would receive a raise during the 2021-22 school year proportional to salary increases for district teachers. A new contract between the district and its teachers union is expected to be announced in the coming days, Peterson-Mayberry said.

At the board meeting Wednesday evening, several public commenters criticized Vitti’s salary, which is among the highest for a district leader in the state.

Gavin Buckley, a teacher in the district, said Vitti has “increased the number of high-salaried people [working for the district] downtown … and yet we don’t see a translation into the outcomes in terms of learning, in terms of safety, in terms of respect or pay for the staff, students, and families of this district.”

Vitti pointed out that the district has increased teacher salaries during his tenure, setting starting pay at one of the highest levels in the region. He said the school system is on track to start the coming year with no vacant teaching jobs, a sharp contrast to the hundreds of vacancies he faced when he became superintendent.

He said he expects that the district’s next contract with teachers “will once again increase salaries on a recurring basis for teachers.”

Substantial challenges lie ahead for Vitti. Rising COVID cases threaten the district’s efforts to help more of its roughly 50,000 students learn in person this school year. Meanwhile, the Detroit district is working to spend $1.2 billion in federal COVID relief to help students bounce back academically and emotionally from the pandemic.

“This upcoming year will be one of recovery,” said Peterson-Mayberry. “Our focus will be to restart our momentum toward improving student attendance and achievement.”

This article was originally posted on Vitti gets high marks for his pandemic response: Detroit school board