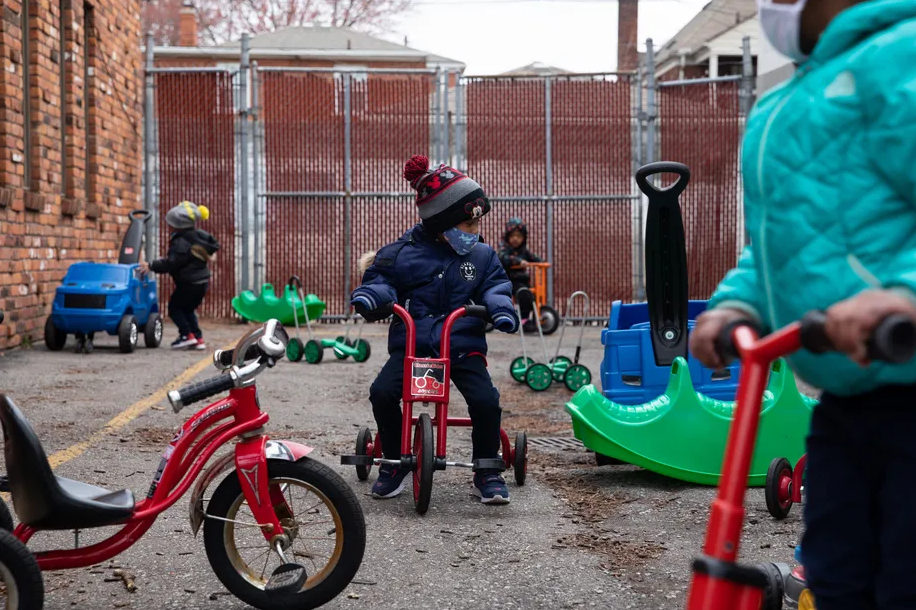 Michigan’s flagship preschool program for 4-year-olds from low income families would get a $405 million expansion in the next three years under a new proposal from Gov. Gretchen Whitmer.

Many low-income families in Michigan struggle to access high-quality child care. There aren’t enough slots to begin with, and many existing programs receive so little state funding that they struggle to pay staff a living wage. Teacher turnover in early childhood classrooms is unrelenting.

Whitmer said her plan would increase enrollment in the Great Start Readiness Program, a state program that has earned high marks for quality from education researchers, by roughly one third, or 22,000 students. She said the goal is to open new GSRP classrooms for students who are currently waiting for spots.

“Twenty-two thousand kids are eligible for GSRP right now but are not served,” Whitmer said during a press conference Tuesday. “Investments in preschool have massive benefits down the line.”

The proposal relies on state money in addition to  federal coronavirus relief funds, and will need support from the Republican-controlled state legislature.

After a year of political hostilities, the two sides agreed last month to negotiate over budget issues, including how to spend $1.4 billion dollars in federal aid for early childhood education. They are working with a massive surplus in the state budget thanks to the infusion of federal money and a healthier-than-expected economy.

Early childhood education has been a rare bipartisan political issue in Michigan and nationwide. Business lobbyists have lined up in support of child care programs for their workers, while education leaders point to evidence that investing in early education pays dividends in learning and life outcomes. The Great Start Readiness Program  got its last major infusion of funding when Rick Snyder, a Republican, was governor, and the state legislature was dominated by the GOP.

Matt Gillard, director of the advocacy group Michigan’s Children, said that expansion helped GSRP programs transition to all-day classes, but it wasn’t enough to clear waiting lists for the program statewide. The program is free to families making less than 250% of the federal poverty line, or $66,250 for a family of four, but tens of thousands of families have found themselves stuck on waiting lists.

Child care advocates applauded the proposed expansion of available slots, but warned that the rollout of the funds had the potential to harm existing child care providers if not done carefully.

School districts and large child care centers have typically won the right to offer GSRP programs, excluding smaller providers from a large, stable funding stream. Smaller providers may lack the trained staff or infrastructure to go through the process of becoming a GSRP provider, which comes with strict requirements for staff credentialing and teacher-to-student ratios.

Advocates worry that a major new investment in the program could make those inequalities worse if the big players vacuum up most of the new funding and smaller providers lose 4-year-olds to the new programs.

“It’s a good thing when we have available high quality seats for our children,” said Denise Smith, implementation director of Hope Starts Here, an early childhood initiative. “I also want to make sure… that we are making sure that all program types can take advantage of the opportunity.”

Detroit Mayor Mike Duggan said expanding the program would add about 3,500 seats in Detroit, effectively ensuring that every 4-year-old in the city would be able to attend a free preschool program.

“Let’s be honest, third grade reading scores in this state are not what we want them to be,” Duggan said. “In Detroit, they’re particularly troubling. There is nothing we could do more to give our children a better start for education than as a 4-year-old to have full day pre-K.”

Duggan said his administration would create a new office focused on early childhood education, which would coordinate an effort to add 100 GSRP classrooms in the city and attempt to spread the new funding to smaller providers.

If the plan is passed, city officials would reach out to existing child care providers with a quality rating of at least three out of five stars and offer to help them open new GSRP classrooms, he said.