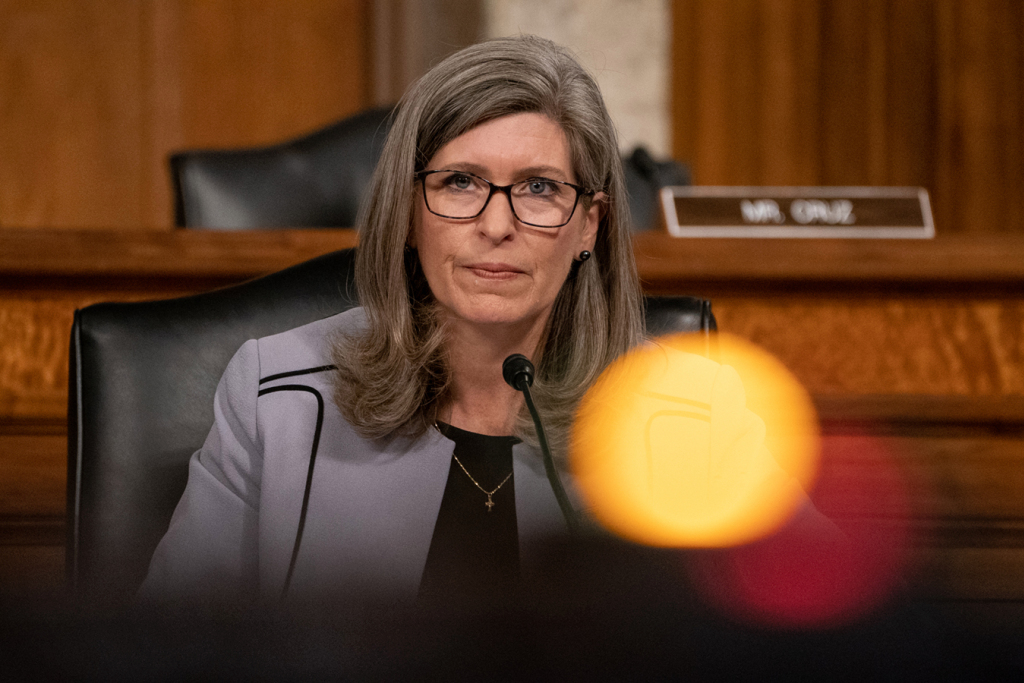 The week that Iowa reported its 90,000th confirmed case of COVID-19, Sen. Joni Ernst sat behind a plexiglass partition and told a debate audience watching from home what she thinks about masks.

“Even though they’re homemade, they work,” said Ernst, an Iowa Republican, showing off a mask emblazoned with the logo of Iowa State University, the largest university in the state.

But what about requiring people to wear masks when they cannot safely distance themselves? On that, she sided with the state’s Republican governor and President Donald Trump, contradicting evidence that states with mask mandates have seen bigger drops in coronavirus cases than those without: “We know that it doesn’t work,” she asserted about mandates.

Trump and COVID-19 loom large in this race and they are putting Ernst in a precarious position. In less than six years, she has gone from being a rising star — who was reportedly under consideration to become Trump’s vice presidential running mate in 2016 — to running neck and neck against a political newcomer, businesswoman Theresa Greenfield. The race is critical to the Republicans’ hopes of keeping control of the Senate.

Part of her problem is Trump. A Des Moines Register/Mediacom Iowa poll last month showed more than 1 in 3 Iowa voters think Ernst’s relationship to Trump is “too close.”

Art Cullen, a Pulitzer Prize-winning journalist who runs The Storm Lake Times in northwestern Iowa, recently wrote: Ernst “is in lockstep with Trump and McConnell on nearly every issue,” referring to the Senate’s Republican majority leader, Mitch McConnell. “Iowans don’t like that. They like mavericks.”

But another part of her problem is how the Trump administration has mishandled the response to the pandemic. Iowa suffered from some of the nation’s bigger COVID-19 outbreaks, with the state reporting in recent days record numbers of hospitalizations. It has been bad enough that last week the White House coronavirus task force called on Iowa to institute a statewide mask mandate.

Greenfield is capitalizing on Ernst having toed the party line on downplaying the COVID-19 threat. The Register poll found that Greenfield, who is campaigning on the ideas that Ernst has done too little to protect Iowans during the pandemic and been too friendly to corporate donors, had a slight edge over the incumbent senator, 45% to 42%. That result is well within the poll’s margin of error. A Quinnipiac poll released Wednesday also found Greenfield has a slight lead over Ernst, 50% to 45%, just outside the poll’s 2.8-point margin of error. Political analysts say the race is a toss-up.

It doesn’t help Ernst that Trump has lost strength in Iowa. Polls show the president, who won the Iowa vote by more than 9 percentage points in 2016, is in a dead heat with the Democratic nominee, former Vice President Joe Biden.

And that decline could very well be because of COVID-19. A New York Times analysis released this summer showed voter support for Biden grew by about 2.5 percentage points locally when a county experienced “extremely high levels” of COVID-19 fatalities — similar to the way support for elected officials drops during wartime in areas that have lost troops.

Those deaths were costing Republicans running for the Senate “as much as they are costing the president,” the analysis found.

In August, Ernst fanned the flames of a conspiracy theory amplified by Trump and at least one other vulnerable Republican that only 10,000 Americans had died of COVID-19. (More than 185,000 had died at that point.) She said at a campaign event in Waterloo, Iowa, that she was “so skeptical” of the official death toll and raised the possibility that doctors were inflating the numbers for financial gain.

Her comments sparked a sharp backlash and, a few days later, she released a statement concurring with the official death toll from public health experts. The Ernst campaign did not respond to an interview request for this story.

In a statement last week, Greenfield said elected officials must listen to public health experts and set clear examples to help Iowans take the crisis seriously. “By pointing fingers and playing politics, not passing the relief Iowans urgently need, and refusing to apologize for her dangerous comments about the Covid-19 death toll, Senator Ernst has failed to put Iowa first during this pandemic,” she said.

Last spring the virus spread through the state’s meatpacking plants, potentially exposing thousands after Trump ordered the plants to stay open. In early October the state’s fourth-largest city, Sioux City, ranked in the top 10 of affected metropolitan areas nationwide, with about 64.3 cases per 100,000 residents.

Gov. Kim Reynolds, a Republican who has refused calls to impose a mask mandate, closed bars in six counties for less than three weeks before working to loosen quarantine restrictions — against the recommendations of the Centers for Disease Control and Prevention.

Iowa has borne the blow of Trump’s trade disputes, with farmers forced to accept millions in federal bailout money after a tit-for-tat tariff war with China and other nations cut off crop exports.

Leonard Foster of Mason City, Iowa, 82, spoke of a neighbor who was struggling to sell his grain and cattle because of the disputes. The future of Social Security and Medicare are his biggest concerns, though he said he also worries about his children and grandchildren contracting COVID-19. A lifelong Democrat who had voted for Chuck Grassley, Iowa’s other Republican senator, he is not planning to back Ernst.

“She’s agreeing with Trump too much, as far as I’m concerned,” he said.

Ernst faces pressing questions about her party’s failure to agree on a replacement for the Affordable Care Act. The Supreme Court will hear a case next month that could overturn the law, an outcome that looks more likely if Trump’s latest nominee, Amy Coney Barrett, is seated in time to participate. Ernst has insisted she supports the ACA’s popular protections for preexisting conditions as critics point out that her past votes to repeal the law would have eliminated those protections.

Congress’ failure to renew aid for struggling businesses and families has left some Iowans feeling, at best, that the government is not doing enough and, at worst, that politicians like Trump are hampering economic recovery.

Melissa Warren of Wellman, Iowa, said her husband has been sick with COVID symptoms and unable to work since March. Though he was hospitalized for pneumonia and remains ill, she said he has not tested positive for the virus. That disqualifies him from the few federal protections against COVID-19 bills.

Their high-deductible insurance plan is expensive, and he does not qualify for other benefits. After visits to specialists like cardiologists and pulmonologists, the medical bills are piling up, Warren said.

A Methodist pastor who works with low-income communities, Warren described presiding over one of the first funerals in Iowa for a COVID victim and the fear and pain of a family that could not even gather to grieve due to public health restrictions.

“Watching, for example, the president choosing to not wear masks, to give information that’s incorrect, has been very devastating for communities trying to build themselves up and care for one another,” she said in an interview before the announcement of Trump’s own diagnosis.

This article was originally published on With Senate Control at Stake, Trump and COVID Haunt Ernst’s Fight to Keep Her Seat