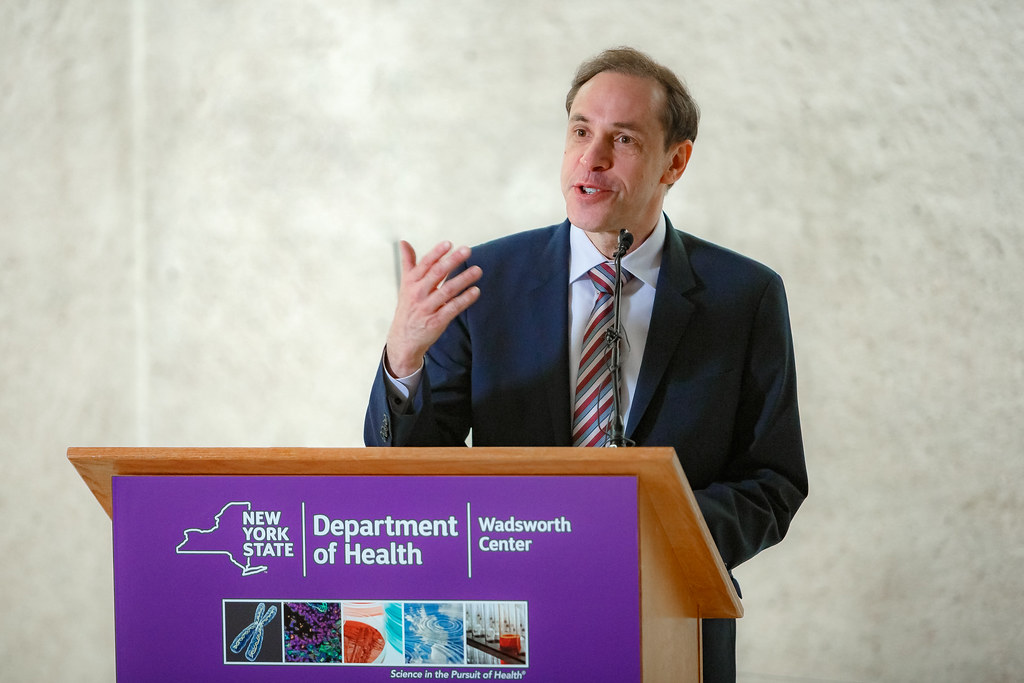 New York’s chief physician deflected blame and side-stepped questions Thursday about the state’s handling of the pandemic in nursing homes — including queries about use of an unproven COVID-19 treatment administered at a state-run nursing home in Queens.

Dr. Howard Zucker provided the fullest state response yet to a report by THE CITY, Columbia Journalism Investigations and Type Investigations that found at least 62 residents of the New York State Veterans’ Home at St. Albans were given hydroxychloroquine and azithromycin last spring — despite risks documented by federal authorities years before the pandemic.

“At the point that it was given, hydroxychloroquine was considered a potential therapy. That, along with azithromycin as a combination, could be a therapy to improve outcome. It turned out not to be the case,” said Zucker, who heads the state health department.

State Sen. Todd Kaminsky (D-Long Island) raised the report, noting the allegations that the state-run facility failed to disclose the use of the medications or their serious side effects to some families of residents.

“Any therapy that’s given to a patient has to get approval by the patient or the health care proxy,” said Zucker, echoing previous comments from Gov. Andrew Cuomo. “The decision was made by the patient.”

Some Patients Had Dementia

Several of the family members in the report were health care proxies. Others said they were in charge of their relatives’ medical decisions at the time because the loved one had dementia and was unable to comprehend treatment options.

“My uncle had vascular dementia,” said Colleen Hanley, who alleged that her uncle, Stephen Durnin, was given the drug cocktail at St. Albans without her consent. “What made the doctor believe that severely ill patients understood they were being given an experimental treatment?”

Durnin, an 85-year-old Korean War veteran, died April 22. The primary cause on his death certificate is listed as cardiac arrest due to pneumonia and presumed COVID-19.

In his testimony, Zucker downplayed the potential risks posed by the drugs, even as he avoided specifics.

“I went back and I looked at the literature a couple days ago,” he said. “The combination of those two [drugs] could have been a problem, but it’s extremely rare.”

Hydroxychloroquine’s FDA-approved drug label, issued in 2017, warned that the antimalarial was associated in rare instances with life-threatening heart problems, and that geriatric patients should be closely monitored. The risks increase with age and comorbidities like kidney or cardiovascular disease, experts say.

The label urged that it “should not be administered” with drugs like the antibiotic azithromycin, also associated with fatal heart arrhythmia.

Last March, Cuomo issued an executive order allowing the use of hydroxychloroquine in skilled nursing facilities, including St. Albans. The order did not mention azithromycin or include safety guidance.

The order was discontinued in July after the U.S. Food and Drug Administration revoked its authorization of hydroxychloroquine use, citing the life-threatening heart problems.

Zucker’s comments come days after a Democratic state senator from Queens called on the legislature to hold special hearings on the St. Albans home, separate from a federal probe into allegations that the Cuomo administration covered up the reporting of COVID-19 nursing home deaths.

Sen. Leroy Comrie said the findings about the experimental cocktail have shaken public confidence. “We have to restore trust and integrity in our nursing homes,” Comrie told THE CITY in a statement. “For healing to occur, it is necessary for the legislature to hold hearings on these matters.”

Assemblymember Alicia Hyndman, also a Queens Democrat, echoed Comrie’s comments in the Thursday hearing, saying the report in THE CITY was making Black residents in her district hesitant to get vaccinated.

“No one is experimenting on anyone. I know this is something that’s surfaced and there’s hesitancy and worry,” Zucker said.

Tens of millions of Americans have been vaccinated so far, including nearly 10% of New York City residents, THE CITY’s Coronavirus in New York City tracker shows. Side effects are generally mild and an overwhelming majority of recipients have not reported serious health problems, with rare instances of allergic reactions.

‘I Believe in Transparency’

Lawmakers pelted Zucker in the hours-long hearing with accusations that the state “stonewalled” the legislature’s repeated requests for more transparency, particularly on the nursing home death toll following reports the Cuomo administration undercounted.

To date, more than 13,000 nursing home residents have died in New York from COVID-19, according to the state health department. That includes roughly 4,000 residents who died outside of the homes — a figure released only after the attorney general’s report.

“As a resident of New York, I believe in transparency. As a doctor, I believe in accuracy. And we did our best to achieve both,” Zucker said Thursday.