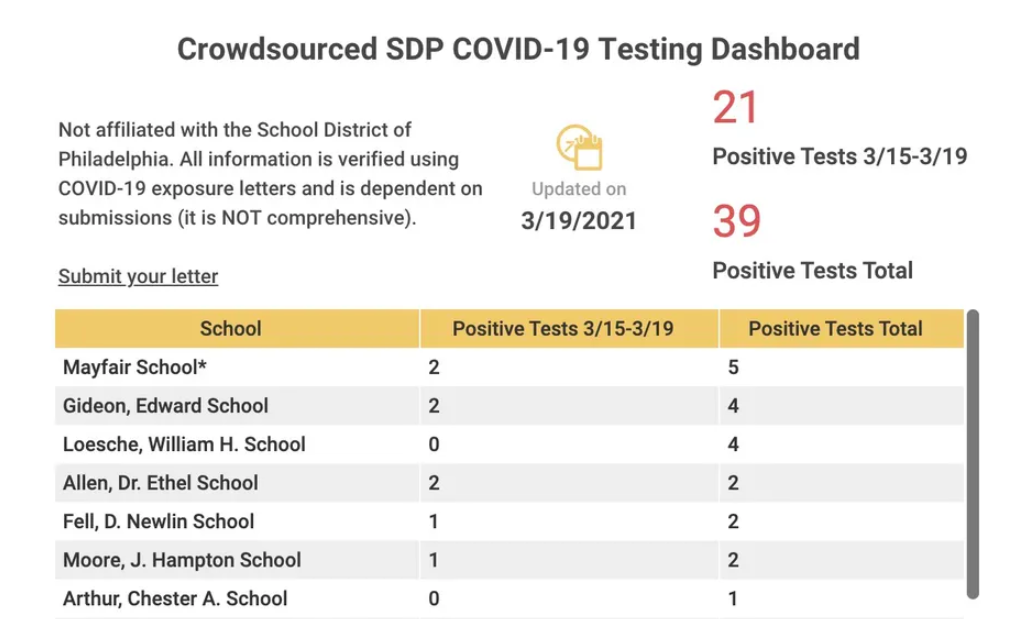 Philadelphia’s district schools recorded 21 positive COVID-19 tests this week, according to data compiled by members of Parents United for Public Education and the Caucus of Working Educators.

Both groups made a tracker public late Thursday, a day after Mayfair Elementary School in the Northeast announced it would temporarily shut down due to COVID-19 cases. The school’s principal, Guy Lowery, sent a letter to school staff confirming “multiple positive COVID-19 cases” were found.

“The tracker came out of conversations between parent and educator organizers who were hearing about cases in their communities,” said Max Rosen-Long, communications organizer for the Caucus of Working Educators, or WE Caucus.

The School District of Philadelphia hasn’t created a public dashboard to track COVID-19 cases in its schools since it began a phased-in reopening two weeks ago for students in prekindergarten to second grade. After Mayfair announced its temporary shutdown, the Philadelphia Federation of Teachers called on the district to create a dashboard for greater transparency about positive cases.

In the absence of an official tracker, the two groups created one of their own.

District officials could not confirm the numbers in the tracker, but said the district “continues to use guidance and follow direction from public health experts, including the Centers for Disease Control and Prevention, the Philadelphia Department of Public Health and Children’s Hospital of Philadelphia.”

The tracking website listed four confirmed cases for Mayfair from the last two weeks overall. The guidelines from the Philadelphia Department of Health say in-person activities for the entire facility should cease if three cases are found within 14 days when exposed at the school facility or if six or more cases are reported within 14 days regardless of source of exposure.

The two groups said they verified the information in the dashboard using COVID-19 exposure letters, which go out to staff members and families after positive cases are recorded. “The data is based on anonymous submissions of these letters, which only include the date and when the individual was last in the building, so there’s likely more cases that haven’t been added to the tracker too,” Rosen-Long said.

Many schools had cases among staff members even before students and PFT members returned last week because some staff were on campuses ahead of reopening. The total numbers in the tracker are since schools reopened earlier this month, Rosen-Long said.

The chart does not break down if teachers were vaccinated or if any of the numbers represented students.

“We had actually started to put the tracker together earlier in the week because we’re already starting to hear about other schools with cases,” Rosen-Long said. “And then when the Mayfair thing happened, it underlined how important it was to make sure that we’re tracking this information.”

Rosen-Long said teachers are confused about why the district has not made the information public. Other large urban districts, such as Chicago and New York City, release information about their COVID-19 cases, he said.

“Many other large urban school districts have this data publicly available,” Rosen-Long said. “Lots of large urban districts are already publishing this information. So this is the standard. It’s not like something extra we’re asking for. It’s just that Philadelphia is below the standard.”

Mayfair, located at 3001 Princeton Ave., is scheduled to be closed until April 1, according to a letter Lowery sent to school staff.

During the temporary closure, students and staff at Mayfair will return to the digital learning model and families will be contacted by their child’s teacher with details. The district said the Mayfair building will be deep cleaned and disinfected before it is reopened for students and staff.

After the Mayfair announcement, PFT President Jerry Jordan demanded the district use trackable data. “Anecdotally, we have learned from our membership that efforts to trace cases are delayed. This is unacceptable,” Jordan said in a statement Wednesday.

Since returning to 53 Philadelphia district schools last week, teachers have been cataloguing what they say are unsanitary conditions, despite promises from the district that buildings had been thoroughly cleaned and made safe.

A separate tracker, started by WE Caucus members, urged teachers to post pictures and descriptions of conditions they find as they re-enter school buildings for the first time since the shutdown last March caused by the coronavirus pandemic. In less than a week, the site received more than 30 testimonials.

Last week’s reopening was the fourth time since September that the district had attempted to return to some in-person learning. After false starts in September and November, due to opposition from parents and teachers and a surge in cases of the coronavirus, the district made plans for some in-person learning for kindergarten through second grade in February. That was delayed until March after the union objected and called for third-party mediation, citing inadequate ventilation in many buildings and the lack of teacher vaccines.

“It feels like severe illness and death from COVID is abstract for some folks, but for many of us it is very devastatingly real and it is heartbreaking,” said Zoe Rooney, a teacher and a parent in the district, as well as a member of Parents United for Public Education. “We need a comprehensive COVID testing dashboard, like those available in other districts, that includes the number of tests and positives in each school each week and cumulatively, broken down for students and for staff.”