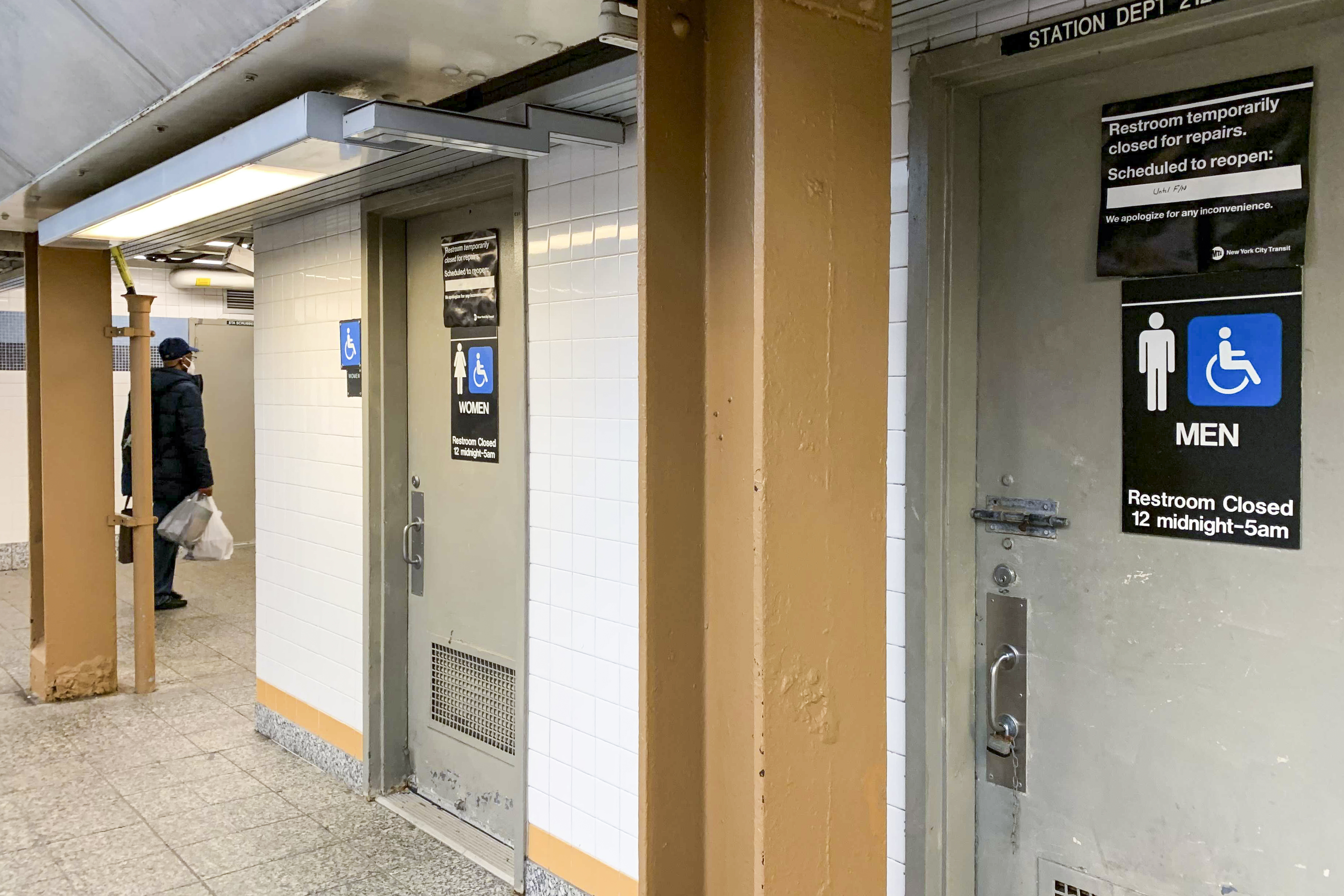 With a mix of embarrassment and frustration, Scotty Stone described having to step off a subway train, desperate to find a place where he could relieve himself on the sly.

“Luckily, nobody was around, so I had to go to the back of the platform and do whatever I had to do,” said the 53-year-old, who most nights sleeps in Central Park. “I can’t wait — and there’s no bathrooms in the subway.”

All MTA-maintained subway bathrooms — covering 76 stations, 16% of the entire system — have been closed for more than a year as part of the MTA’s efforts to stop the spread of COVID-19.

The shutdown of restrooms in the subway, combined with a shortage of businesses that allow people to use their facilities during the pandemic, have highlighted the city’s long-standing lack of access to places that offer relief.

Internal MTA figures obtained by THE CITY show that in 2021, there have been 526 reports of “soiled” subway car interiors through April 23, most of which are instances where trains were used as toilets.

A Matter of ‘Dignity’

In Stone’s case, he said he had “a garbage thing blocking me” while he relieved himself on a platform.

“Think about the dignity they lose when that happens,” said Giselle Routhier, policy director at the nonprofit Coalition for the Homeless. “It is 100% a failure to care for New Yorkers overall, but in particular some of the most vulnerable New Yorkers.”

A City Hall spokesperson said reopening the city should include reopening restrooms in the subway.

The MTA, which is controlled by Gov. Andrew Cuomo, could not provide a timetable for when it will unlock any subway station restrooms.

Prior to the pandemic, some bathrooms in the subway were already closed — for repairs or because the NYPD requested they be shut due to vandalism, an MTA spokesperson said,

No Place to Go

In the absence of public toilets in the subway and elsewhere in the city, many homeless people flock to Penn Station and the Port Authority Bus Terminal in Midtown. The restrooms there remain open, but are also closed periodically for deep cleaning.

“There should be more bathrooms open,” said Sonja Bryant, 59, a wheelchair user who was panhandling Wednesday in Penn Station. “These are really hard times when you can’t find one on the street or in the subway.”

The de Blasio administration last year placed portable restrooms and hand-washing stations in 12 locations around the city. But a spokesperson for the Department of Social Services said they were taken out of service after being vandalized and that there are no plans to redeploy them.

“It’s been crazy, it’s been crazy,” a 49-year-old homeless man who goes by “Joe” said outside the restrooms at the Port Authority Bus Terminal. “I just pee outside a lot.”

Outreach teams have been providing unsheltered New Yorkers with basic hygiene supplies, like cleaning wipes, as part of the efforts that the DSS spokesperson said have resulted in nearly 7,800 referrals to shelter services since the May 5, 2020, suspension of overnight passenger service in the subway.

But the reports obtained by THE CITY of soiled interiors in subway cars point to the problems that have resulted in MTA officials repeatedly lobbying City Hall and the NYPD to increase mental health services and policing in the transit system.

An MTA spokesperson said the 526 “soiled” car incidents this year are about half the number from the same timeframe a year earlier. Weekday ridership is now regularly topping 2 million trips on weekdays — down more than 60% from equivalent pre-pandemic days, according to MTA data.

Some examples of recent reports:

One MTA board member told THE CITY that the transit agency and its customers would benefit from having more bathrooms both on city streets and in the subway system.

“Best practices regarding public bathrooms are entirely absent in New York City,” said the board member, who asked to not be identified by name. “It’s as if no one has noticed the sanitation problems it causes.”

Stone said he used to spend colder nights in the subway until overnight passenger service was suspended a few months into the pandemic.

Now he makes sure to be prepared any time he goes into a station.