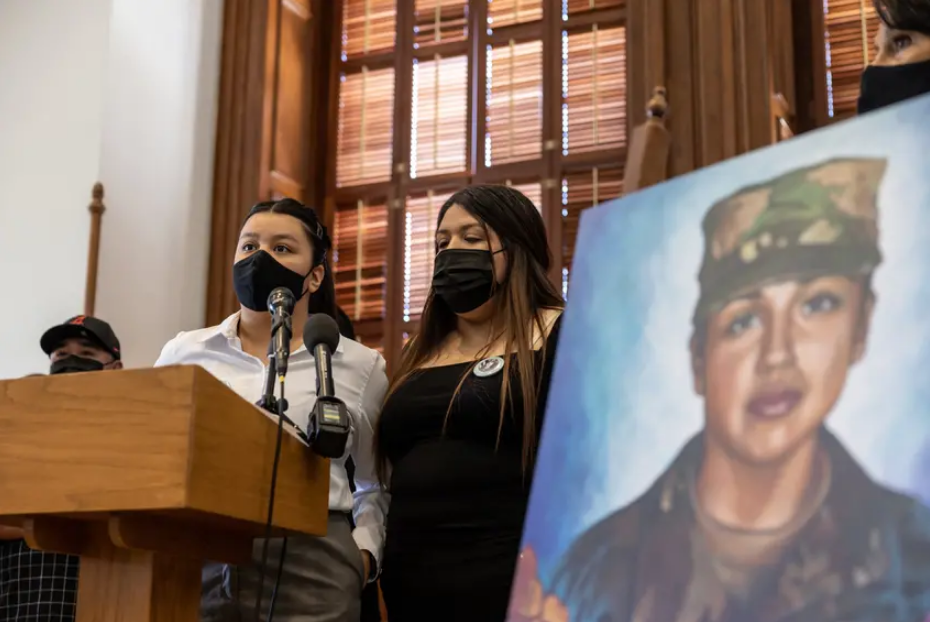 Over a year after U.S. Army Spc. Vanessa Guillén’s death in Texas,which spurred a movement against sexual assault and harassment in the military, federal lawmakers are renewing efforts to reform — and add external accountability to — the way the military deals with such behavior.

Guillén was 20 when she was bludgeoned to death. Her body was found mutilated and buried in a shallow grave. The Army recently confirmed that Guillén reported sexual harassment twice by someone other than her alleged killer, but Army officials failed to report the harassment further up the chain. Her family members say she was sexually harassed by multiple soldiers before she was killed.

The Houston native’s killing spurred investigations both inside and outside the military that found a pattern of violence and abuse against soldiers at Fort Hood in Killeen, the U.S. military’s largest active-duty base, where Guillén was stationed. Her death also ignited widespread calls for military reform to end sexual harassment, sexual assault and violence. And state and federal lawmakers began drafting bills targeting reform.

In Washington, D.C., the original federal bill bearing her name stalled last year in Congress. But lawmakers last month, armed with the hope of bipartisan support, introduced a new version of itaimed at increasing accountability and justice within the military, titled the “I Am Vanessa Guillén Act of 2021.”

“Sexual violence is an epidemic in the military, has been for decades, we’ve spent over a billion dollars trying to fix it within the framework of the existing system,” said U.S. Rep. Jackie Speier, D-Calif., the bill’s author. “It’s a system that hasn’t worked for a long time.”

Currently, the military investigates and prosecutes these cases completely internally — which advocates say is burdened by a lack of expertise, bias and weak punishments. Military commanders decide whether a case goes to trial or whether to handle it behind closed doors. Advocates say cases are underreported because soldiers fear retaliation or don’t think they’ll get justice — both of which exacerbate the problem.

Speier’s bill would move legal decisions outside the military chain of command to a new outside office in order to add external accountability and would require the Secretary of Defense to establish a process so service members can lodge confidential complaints.

The bill would also explicitly list sexual harassment as a crime in the military law constitution, the Uniform Code of Military Justice. The bill was referred to the Committee on Armed Services.

“It took the horrific, grisly murder of Vanessa Guillén for many to wake up, both in the military and outside the military — and the advocacy of a family just heartbroken from the loss of their loved one,” Speier said.

“From personal experience as a veteran … there’s a culture there in the stigma that disincentivizes the reporting of sexual assault or harassment,” said state Sen. César J. Blanco, D-El Paso, who introduced SB 623. “The legislation is absolutely needed to protect service members and begin to change the military culture, and it’s my hope that Congress passes it this year.”

The Legislature also passed — and Gov. Greg Abbott has signed — a resolution urging federal lawmakers to pass the federal “I Am Vanessa Guillén Act of 2021.”

After Guillén’s death,the Fort Hood Independent Review Committee — made up of civilians — created a report uncovering a pattern of sexual harassment and assault and violence that has persisted for years. In response to Guillén’s death, 14 U.S. Army leaders, including commanders and other leaders at Fort Hood, were fired or suspended. But advocates say the problem is bigger than Fort Hood — that sexual harassment and assault are widespread throughout the military.

Investigators did not find “credible evidence” that Spc. Aaron Robinson, the man accused of killing Guillén, sexually harassed her or that the two had a relationship outside of their professional one, a U.S. Army report said. However, Robinson was reported for sexually harassing another female soldier. Robinson killed himself after being confronted by the police.

“I absolutely support [the federal bill],” said Amy Franck, founder of Never Alone, an advocacy group working to end sexual harassment in the military. She said it’s a good first step to reducing harm in the military and that “progress doesn’t happen like a light switch.”

She calls the current system allowing the military to investigate itself “absolute lawlessness” and says the bill would make a drastic change to how these cases are dealt with.

“But we still have got to address the fact that these service members’ civil rights are being violated when they become victimized,” she said.

The officials who deal with sexual assault cases within the military are ill equipped to help victims and often cause more harm, she said. Service men and women can be punished for inconsistencies in their accounts — despite suffering from trauma — and are sometimes encouraged to speak without an attorney present, leading to more fears of retaliation for reporting. There isn’t enough promotion of other resources available, such as the Texas Association Against Sexual Assault, a coalition of rape crisis centers.

Another congressional bill, introduced by U.S. Sen. Kirsten Gillibrand, D-New York, aims to move cases outside the military’s chain of command, and lawmakers say it has enough bipartisan votes to pass, according to NPR. U.S. Sen Ted Cruz, R-Texas, is a vocal supporter of Gillibrand’s bill.

“I’m going to predict by the end of this Congress, we’re going to pass this bill,” Cruz said at an April news conference. “And, it’s about damn time.”

“We must be the voice, be the change and honor my sister. No one deserves to die the way she died,” Vanessa Guillén’s sister, Lupe Guillén, said at a press conference last month. “No one deserves to suffer the way my sister suffered. No one. So please advocate for this legislation because we must save those who are saving our lives.”

This article was originally posted on A year after Vanessa Guillén’s death, lawmakers and advocates call for Congress to pass military sexual assault reform bill