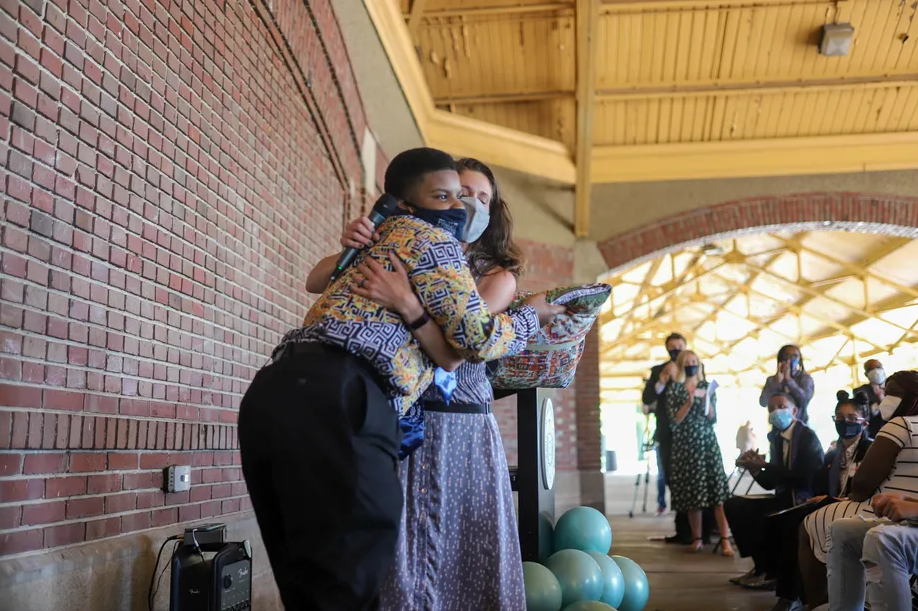 How do you capture the pandemic school year in a word or phrase? Ask the students that survived it.

“Frustrating and terrible,” wrote Xynese Frazier. “I have bad Wi-Fi and had to keep going on and off of Zoom class and I would miss things.”

Saniya Golston jotted down the pep talk she gave herself to get through the year. “You got this,” she wrote, adding that she’d learned to ask questions to keep up with online classes — “even though I don’t like asking questions.”

There’s plenty to look forward to for Frazier, Golston, and the rest of the first graduating class at Detroit Achievement Academy, a K-8 charter school in northwest Detroit. Summer is here. Life seems headed for something like normal as more Detroiters get vaccinated against COVID. This fall, the students will enroll in some of the top high schools in the city.

Yet even as they look forward, the students and their teachers know that the fallout from this strange, terrible school year will complicate the path through high school and ultimately college — a path that is already too precarious for many students in Detroit. Nearly half of high school graduates from the city’s main district must take remedial courses if they attend college. That figure ranges from 32% to 75% for charter high schools in the city.

DAA and its authorizer, Grand Valley State University, are taking a series of unusual steps to show how to help next year’s ninth graders get to — and through — college. With funding from the Ann Arbor-based Mullick Foundation, DAA hired a high school transition coordinator to keep former students on track over the next four years, and it is offering students up to $5,000 toward college costs if they hit GPA benchmarks and apply to colleges on time.

Grand Valley, for its part, is offering DAA graduates automatic admission when they graduate from high school. Plus, many of the students would be qualified for free tuition from the university based on their families’ incomes.

Parents stood up and whooped when these support programs were announced at a DAA promotion ceremony earlier this month.

“It took a lot of pressure off my back,” Tamika Clark said of the support her daughter Neubian, a DAA student since the second grade, will receive through college. “It makes it easier to encourage her to go to college. I would have discouraged her a little bit because of the financial costs.”

Private donations can’t provide the necessary support to every Michigan student who needs help earning a college degree. But they may not have to. Billions in federal coronavirus relief dollars are on their way to Michigan schools, and education leaders are encouraging districts to hire more staff who will keep students on track — people like social workers and counselors. Programs like DAA’s, which are designed to maintain open lines of communication and support between students and their schools, offer one model.

“We are actually creating a PowerPoint presentation right now for schools that talks very specifically about how to use federal funds to set students up for success in college — and this certainly would be great example,” said Ryan Fewins-Bliss, executive director of the Michigan College Access Network, a nonprofit that works to grow the number of students who graduate from college.

What’s on the students’ minds in this moment of transition? Chalkbeat sat down with seven members of the eighth grade class at DAA to find out.

Sitting in desks that now seemed a bit small, the students toggled between the nervous excitement of young lives unfurling and memories of loss and struggle.

They talked about struggling to wake up for virtual classes and about missing their friends.

“Because we weren’t in person, some of the kids were much closer in person, and they kind of like distanced themselves once we were virtual, and that was normal,” Ciara said. “They stopped actually talking.”

Several students said they were sometimes met with silence when assigned to work in small, virtual groups with their peers. Even if they tried to jumpstart a discussion, no one would respond.

Victoria Pickens nodded. “That awkward silence. It was kind of sad.”

Even as they confessed to occasionally scrolling during virtual classes, the students said they are ready for what’s next.

“I feel ready and excited because we’ve had all this preparation,” said Justin Hendon, who will attend University of Detroit Jesuit High School on a full scholarship this fall. “I’ve got everything down pat, and I feel very confident that we’re going to get through.”

Kyle Smitley, the school’s founder, said the pandemic year, hard as it was, also prepared students for what’s next.

“There were so many instances where the pandemic sent a lot of our kids spiraling,” she said, noting that the school hired a trauma therapist to work with students who were struggling emotionally. “But in a sad way, the removal of the routine, of a high degree of support, is sort of what it means to be an adult. So maybe it better prepares them to be managing their own path and schedule.”

Those challenges start early in Detroit, where students often struggle to navigate the complex, competitive process of applying to the city’s top high schools.

With help from their teachers, DAA students begin talking about the process and laying the groundwork for their applications early in middle school.

“If your eighth grade spring rolls around and you start thinking about the next year, the seats are already filled,” Kevin O’Brien, the school’s new high school transitions coordinator, said.

That approach paid off this spring when many of the eighth graders were admitted to Detroit’s top high schools.  Of 22 students who started the school year as eighth graders at DAA, 10 are attending Renaissance High School and two received full scholarships to attend University of Detroit Jesuit, a private high school.

Earlier this month, on a sunny summer afternoon on Belle Isle, the students celebrated their success with a crowded outdoor graduation party. Most people were wearing masks, but the party would still have been tough to imagine last fall. They wore robes and sat together. After months cooped up inside, it felt like a relief.

“It felt good to get outside and do something besides sitting in the house,” Antonio Askew Jr. said.

Ciara, asked a week later to imagine how she would describe the pandemic to her hypothetical grandchildren, said she would stick to moments like this.

“I would share the good things,” she wrote, like “the times where COVID was letting up in my city and I could hang out with friends and family.”

This article was originally posted on COVID won’t stop these Detroit 8th graders from going to college. Here’s why.