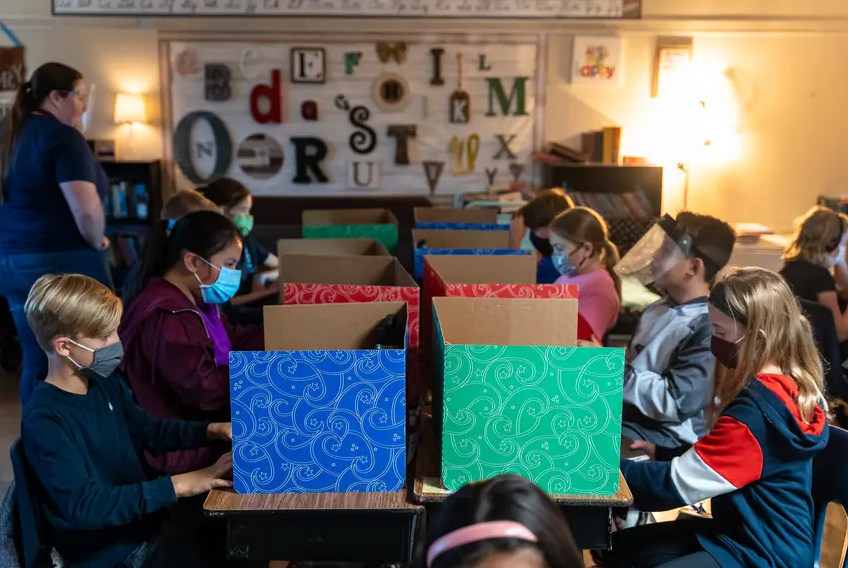 As Texas students too young to get vaccinated head back to school while the highly contagious delta variant threatens to overflow hospitals, a growing cadre of local government officials have mandated mask-wearing in bids to slow the spread of COVID-19 — defying Gov. Greg Abbott.

This week, officials in Dallas and Bexar counties successfully sued for the right to again require masks in public schools and many government buildings — at least temporarily. Dallas County Judge Clay Jenkins went a step further Wednesday and mandated that child care centers and businesses must also require employees and customers to wear masks.

Other officials didn’t bother with a court battle. Travis County officials went ahead Wednesday afternoon with an order requiring mask-wearing in public schools. Some of the state’s largest school districts — Austin, Houston and Fort Worth — already plan to require students, teachers and staff to don masks.

“The rebellion is spreading across the state,” Bexar County Judge Nelson Wolff said.

Abbott — under intense pressure from some on his right to hold the line against local officials who want to require masks — now is trying to quell that rebellion.

Hours after Jenkins signed his mandate, Abbott and Attorney General Ken Paxton announced they would go to court to block Dallas County’s top official, asking the 5th Court of Appeals to overturn the state district judge’s decision that allowed Jenkins to move forward. The two men threatened to sue any government official who defies Abbott’s order.

“The path forward relies on personal responsibility — not government mandates,” Abbott said in a statement.

Speaking to Lubbock radio host Chad Hasty, Paxton predicted the Texas Supreme Court would hear the case by the end of the week.

“If we have local officials who just defy law because they feel like they know better, then we end up with little dictators all over the state and we don’t have any rule of law and we lose our representative government that we vote for,” Paxton told Hasty.

To some local officials, they have little choice but to try and reclaim the authority to enact measures like mask mandates — powers Abbott took away — in the face of skyrocketing COVID-19 hospitalizations and a shortage of nurses to treat the ill. Rarely willing to run afoul of Abbott earlier in the pandemic, the heads of cities, counties and school districts now risk his ire and drawn-out legal battles.

Jenkins said mandating masks is an attempt to give some relief to hospitals, but the best way to do that is for more people to get vaccinated.

“We’re trying to buy our hospitals some time by doing everything that we all can do to get through this,” Jenkins said.

To hard-right conservatives, Abbott had done little until Wednesday to beat back the tide of locals contesting his authority.

For some comparison, Florida Gov. Ron DeSantis, a Republican, has vowed to punish school districts that require masks by pulling their funding — a measure Paxton said earlier Wednesday could be done in Texas.

One of Abbott’s primary challengers, Don Huffines, called on the governor to “stop surrendering to local mask tyrants.”

“While Greg Abbott brags about banning mask mandates in Texas, the largest and most populous counties in the state are imposing them on citizens,” said Huffines, a former Dallas state senator, adding that “it is past time” for Abbott and the Legislature to override the local requirements and “impose real consequences.”

Matt Rinaldi, the new chair of the Texas GOP, tweeted Tuesday night that Abbott should add the issue of rogue local leaders to the list of items state lawmakers should take up during the current special session.

In the meantime, the rush by local officials to once more require mask-wearing has resulted in a patchwork of mandates across the state. As of midnight Wednesday, people in Dallas will have to wear masks to go grocery shopping or eat at a restaurant. Not so four hours south in San Antonio.

In Bexar County, most school districts seemed willing to abide by the local health authority’s order requiring masks in schools, according to the San Antonio Express-News.

But some are holding out. Most of Schertz-Cibolo-Universal City Independent School Districts’s schools are in a neighboring county. As a result, officials there have decided to keep masks optional, Superintendent Clark C. Ealy said Wednesday.

Also holding out is Northside ISD, the county’s largest school district — a move Superintendent Brian Woods took to “avoid flip flopping from day to day” as the county’s legal fight against Abbott continues.

“There is still much legal and political wrangling to come,” Woods told district employees in an email.

School districts in Bexar that don’t comply with the health authority’s order are unlikely to face punishment. San Antonio City Attorney Andy Segovia said Wednesday he has no plans to go after the two school districts.

“Unfortunately, not complying with this mask mandate only increases the possibility that those in their care could be infected with the virus when it’s clear we know it can be avoided,” Segovia said.

“The only real enforcement tool, quite frankly, is the school districts,” Wolff said. “If they choose not to do it, well, what are you going to do? Send a policeman out to every classroom? I don’t think so.”

But school districts flout the order with risk, he said.

This article was originally posted on After local Texas officials defy his ban on mask mandates, Gov. Greg Abbott begins to clamp down