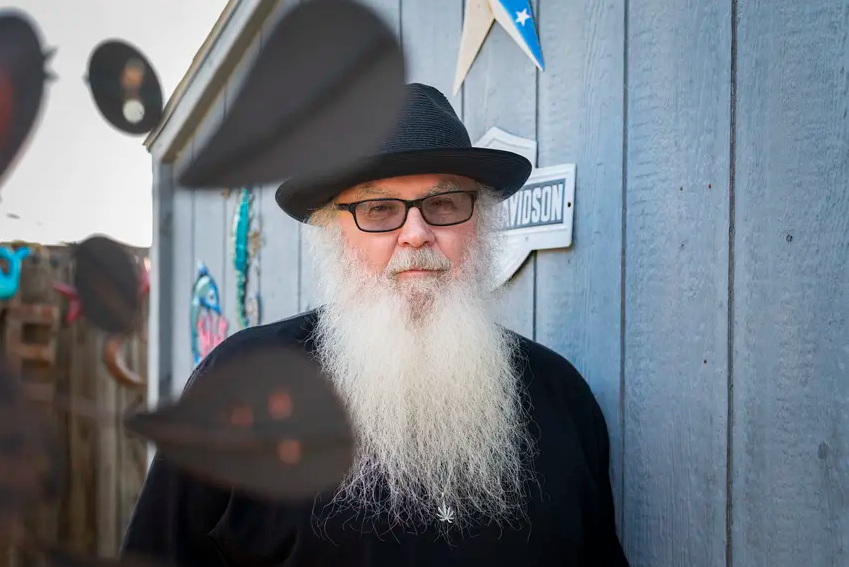 David Bass came home to Fort Worth in 2006 after serving in the Army but sometimes he feels like he’s still in Iraq.

After his 25 years in the military, the 64-year-old Desert Storm veteran had nightmares almost every night for six years about being back on the warfield.

“I still have the sensation that I’m in Iraq,” said Bass, who now lives in Killeen. “I can hear Iraq, I can smell Iraq. I can hear the rockets going off.”

Bass was prescribed several kinds of medications to ease his hypervigilance after being diagnosed with post-traumatic stress disorder. But those medications didn’t help him sleep. Instead, they caused him to have “flat emotions” — and, eventually, suicidal thoughts.

It wasn’t until he tried marijuana that he was able to ease his mind and get a good night’s rest. But since the state’s medical cannabis program is restricted to those with neurological disorders or terminal cancer, Bass had to get his hands on marijuana illegally for years.

Starting on Sept. 1, however, the Texas Compassionate Use Program will expand to include people with PTSD and cancer of all stages, allowing them to use “low-THC cannabis.”

Tetrahydrocannabinol, or THC, is the component of marijuana plants that causes psychological effects, including a sensation of being high. It can be consumed in a variety of ways, such as smoking, swallowing capsules and consuming edibles and oils. All but smoking will be permitted for people to whom the program applies.

THC affects the amygdala, the “fear center of the brain” according to Dr. Muhammad Assad, a psychiatry fellow at Texas Tech University’s Health Sciences Center.

Marijuana “decreases the hyperarousal and hypervigilance of veterans,” Assad said. “Because they’re coming from a traumatic situation, they get very vigilant, they get very aroused, they’re always ready for challenges. So the medical marijuana calms them down. It also decreases nightmares.”

As for cancer patients, THC mainly alleviates the side effects of chemotherapy, such as nausea, loss of appetite and body pains.

Bass usually smokesabout half a gram of cannabis flower twice a day — in the morning to relax his anxiety and again at night, just before falling to sleep. But Texas’ law prohibits smoking medical marijuana. Vaporizing and other means are allowed.

So starting in September, Bass said he and other veterans are going to test the oils and edibles through the program for about three months to see if they work the same way as smoking.

“We’re eager to try this medication and see if it works,” he said.

Bass was a communications officer in Iraq and said the building he worked in was the target of the country’s insurgents at the time. Explosives were thrown unpredictably above and around him for a year, causing him to have “dreams that I was under attack right here in my house,” he said.

Marijuana “would help me organize my thoughts and realize that I didn’t have to be so hypervigilant and paranoid,” Bass said. “It would bring me down to earth.”

The state’s cannabis program served fewer than 6,000 people as of May, and the new law will expand to include veterans with PTSD like Bass and the estimated 114,000 Texans who have cancer, according to the Texas Department of State Health Services.

The rate of PTSD among veterans who served during the Iraq and Afghanistan wars was about 13.5%, though some studies suggest the rate reaches as high as 30%. As many as 500,000 U.S. troops who have served in the wars have been diagnosed with the mental health disorder.

The new Texas law will not only expand the state’s cannabis program, but double the percent of THC allowed in products to 1%. The law is a much more narrow version than the version written by state Rep. Stephanie Klick, R-Fort Worth, that initially passed the Texas House. That version of the bill sought to raise the THC cap to 5%, which is still far lower than what’s authorized for medicinal use in other states, and allow those suffering from chronic pain to participate in the program.

Jax Finkel, the executive director of Texas’ chapter of the National Organization for the Reform of Marijuana Laws, or NORML, said the passage of the new law is a win for cannabis advocates. But, he said, there is still much to fight for.

Advocates are pushing to increase the state program’s THC limit because that will lower the amount of carrier oil that makes up marijuana medication.

“People are still going to be consuming the same amount of THC — it’s just going to be a small amount of carrier oil,” Finkel said.

Consuming too much carrier oil can cause a variety of side effects, such as gastrointestinal issues. Such is the case for former Dallas Cowboy football player Jay Novacek’s son Blake.

Jay and Amy Novacek have been ardent supporters for raising the state’s THC threshold since their son Blake was prescribed cannabis years ago to control his seizures and migraines. But since Blake’s medical cannabis was more than 90% carrier oil, he suffered from gastrointestinal issues.

In a Facebook video, the Novaceks said their son essentially has to choose between having seizures or stomach problems every day.

Finkel said there are many others like Blake who have seen the serious side effects of taking large amounts of carrier oils.

The last time the compassionate use program was expanded was in 2019 to include neurodegenerative disorders such as Alzheimer’s and Parkinson’s diseases, and there currently are three companies licensed to produce and sell medically prescribed cannabis in Texas: Fluent, Compassionate Cultivation and Surterra Texas.

Texas is one of 36 states that allow the use of medical marijuana, according to the National Conference of State Legislatures.

“Because [the program] was so narrow for so long, many patients were forced to go to the neighboring states around Texas that have robust medical programs to gain access to the plant,” Finkel said. “And in fact, many patients have had to actually leave the state permanently for access — medical refugees.”

A survey conducted by Rice University’s Baker Institute for Public Policy found that among nearly 3,000 respondents who were using medical marijuana, 84% said they have considered leaving Texas for a state with a more inclusive cannabis program.

Finkel said expanding the state’s medical marijuana program will not only keep patients in Texas, but help them access safe and regulated cannabis.

“When you’re purchasing through the illicit market, you don’t really know necessarily what you’re getting,” Finkel said.

Barbara Bevill of Wylie was diagnosed with breast cancer in 2014 when 11 tumors were found on her left breast. She endured 18 months of chemotherapy, 33 rounds of radiation and a major invasive surgery.

Bevill consumed marijuana throughout her fight with cancer, which she said not only helped her maintain her appetite, but is the reason she was able to hold on to hope. But since it was illegal, she almost always got ahold of marijuana through friends. She wanted to know the details of what she was consuming, but she said she never did because she took what she could.

“It was something illegal, something I couldn’t access,” Bevill said. “I would have loved to have known the percentages and everything that was in it… but it was not like I could go to a dispensary or store to ask. I took what people gave me.”

Bevill was declared cancer-free in October 2015, and she said there are now just a few lingering indications that she fought the disease at all. She has the energy to keep up with her four young children and she married her “soulmate” in June.

She is hoping the THC cap gets raised in the future, but is glad others in the same position as her will now have access to medical marijuana.

“I was able to stay active even during chemo when that drains so many others,” Bevill said. “Chemo takes the life out of you. I feel like cannabis allowed me to make it through a time in my life when I was close to dying.”