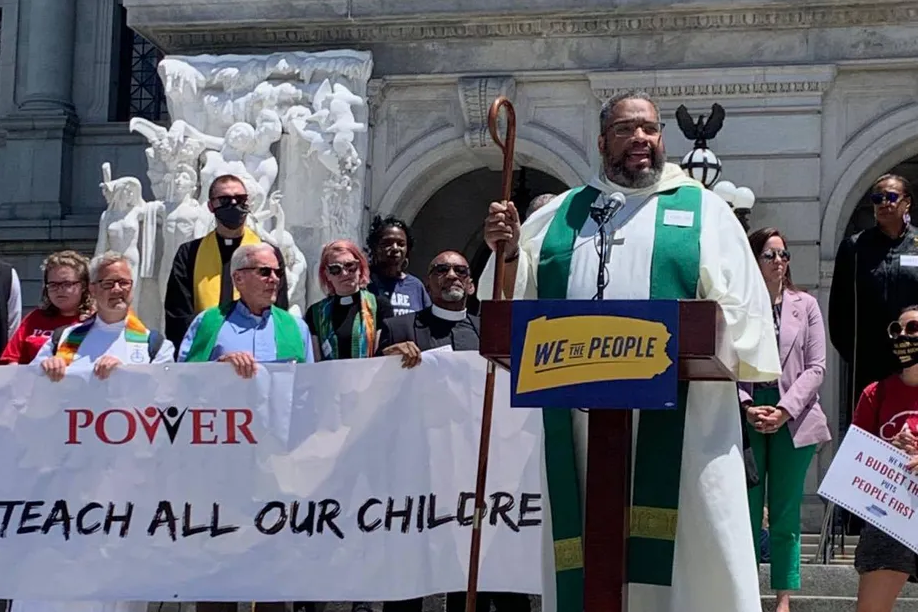 The budget included $300 million more in basic education aid, one of the largest increases in state history, but fell far short of what some advocates and school officials had hoped for.

In Philadelphia, the school district will get $80 million more in education funding for the 2021-22 fiscal year. Hite said he was pleased with the increase but disappointed that the legislature didn’t do more.

“I’m thrilled to get the $80 million,” Hite said. “But the more important thing is fully funding public education and running as much money as possible through the funding formula.”

The fair funding lawsuit, filed in 2014, seeks to overhaul the state’s system for funding education, long recognized as one of the most inequitable in the country. The lawsuit argues that state aid to education is both inadequate to meet all students’ needs and is also distributed inequitably.

Mayor Jim Kenney said the budget deal, which fell far short of the $1.35 billion increase in education spending that Gov. Tom Wolf had proposed in February, showed that Republicans in Harrisburg “don’t care about education, they don’t care about children’s welfare.”

The lawsuit, brought on behalf of six low-income school districts as well as several parents and civil rights groups, is scheduled to begin on Sept. 9 in Commonwealth Court.

State lawmakers adopted a new “fair funding” formula a year after the lawsuit was filed, which is weighted to take into account high-needs student populations, such as English language learners, low-income students, and students with disabilities. The formula also gives weight to a district’s concentration of poverty, household incomes, and taxing capacity.

But the formula has not been used to distribute the state’s full pot of education aid, only new money, and now drives only about 11% of the funds.

Philadelphia is not a plaintiff in the case, but Hite and Chief Financial Officer Uri Monson will be called as witnesses, said attorney Dan Urevick-Ackelsberg of the Public Interest Law Center, which is helping to represent the plaintiffs.

“They are going to testify about the inadequate resources they have,” Urevick-Ackelsberg said.

In addition to the $1.35 billion increase, Wolf, a Democrat, proposed changing how the state distributes the money by running all the basic education aid through the fair funding formula, even before the influx of federal pandemic aid into the state. Had that proposal been adopted, Philadelphia would have received an additional $261 million.

Other struggling districts, including Reading and Allentown, would have also seen their allocations rise significantly.

Studies have found that Pennsylvania underfunds its schools relative to need, which puts a heavy burden on local taxes and results in some of the widest gaps between poor and wealthy districts in the country. The state contributes about 38% of overall education costs; the national average is about half.

Another witness will be Christopher McGinley, Urevick-Ackelsberg said. McGinley was a teacher and principal in Philadelphia, a member of the School Reform Commission when the district was run by the state, and a member of the Board of Education for two years until last March.

He also served as superintendent in Lower Merion, one of the state’s wealthiest districts.

McGinley told Chalkbeat that he gave a lengthy deposition in the case last year.

“A lot of the questions posed to me were about the differences in funding in suburban communities and in Philadelphia,” McGinley said.

State data shows that, relative to student need, Lower Merion spends two-and-a-half times as much as Philadelphia — $26,735 per student compared to $10,235.

McGinley agreed that addressing the issue is not likely to be resolved politically.

“I think given the politics of Harrisburg, the lawsuit is the only chance of unlocking adequate and equitable funding,” he said.

Due to its size and high-needs students — it is by far the largest of the state’s 500 school districts — Philadelphia is always in line for a huge chunk of any dollars driven either by the fair funding formula or the federal Title I program, which is meant to help schools and districts combat poverty. Last year, the state distributed $200 million from the first federal pandemic relief fund in a way that minimized Philadelphia’s share — just $13 million, compared to the $40 million it would have gotten had the fair funding formula been used.

Even though research showed that the pandemic was having a great effect on Black and brown students, on a per-pupil basis “the district receives less than every other school district in the commonwealth,” Kenney and City Council President Darrell Clarke wrote to Wolf last August. Philadelphia educates close to half the Black and brown students in the state.

And other analyses of state aid have shown that the formula disproportionately affects districts with more Black and brown students, even when controlling for poverty.

In one of the latest pre-trial motions, attorneys for the legislature sought to eliminate any evidence showing racial disparities that result from the current method of distributing state funds.

Republicans generally want to save money for fear of future deficits, while Democrats want to spend it on immediate needs. That partisan difference played out in this year’s negotiations.

Wolf’s proposal initially included a tax increase to raise enough money so that no district would lose funds as a result of the distribution. With the influx of federal pandemic relief funds, his proposal could have been paid for without increasing taxes at all.

Still the Republican-controlled legislature, citing the need to save for potential future economic downturns, decided not to spend most of the $7.5 billion in funds from the American Rescue Plan. They also decided to put an unanticipated $3 million surplus in a “rainy day fund.”

“We wanted to make sure that we didn’t put the commonwealth in a position…that we can’t fund education or fund social programs moving forward,” House Appropriations Committee Chair Stan Saylor of York, told reporters when the budget was adopted. “There may be criticisms of us for not spending all that money now, but what about next year? What about two years from now.”

Advocates wanted the state to use the funds on immediate needs, such as fixing school buildings with dangerous toxins, such as lead, asbestos and mold. Such repairs are one-time expenditures, which the state wouldn’t have to pick up after federal funds ran out.

Activists, including City Council member Helen Gym, last week protested in Harrisburg demanding that the General Assembly “spend the money.” They were arrested.

Two days later, the governor and legislature agreed to increase basic education funding by $300 million, including $100 million in so-called “level up” funds targeted to the 100 poorest districts, including Philadelphia. The advocates considered the “level up” allocation a victory, since it acknowledged the persistent inequities that mark the state’s school funding.

About half Philadelphia’s $80 million increase, $39.5 million, is coming from the “level up” supplement, according to state data.

This article was originally posted on After this year’s budget deal, officials say lawsuit is best hope for reforming school funding