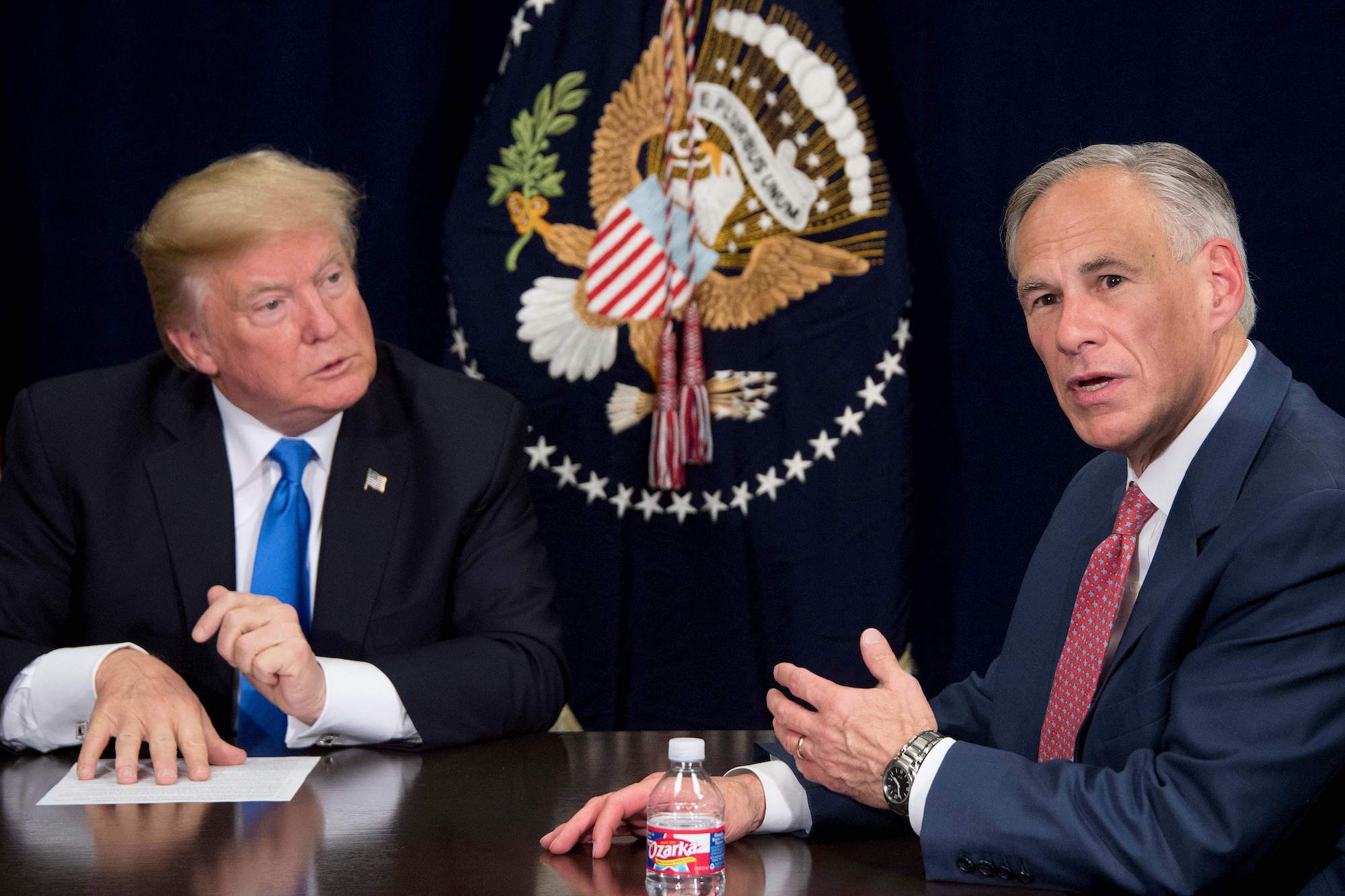 Members of a Republican Congressional delegation later joined them at a portion of the unfinished border wall at the Pharr-Reynosa port of entry in the Rio Grande Valley sector.

While many believed Trump might have come to the border to announce that he would be helping build the wall, or help finance it, he made no such claims. His remarks focused on Abbott’s reelection campaign, and the failures of the Biden administration.

In front of the unfinished wall, Trump said he had endorsed Abbott “very strongly;” and had given him a “complete and total” endorsement. Trump added that Abbott’s opponents “shouldn’t be able to beat him” in his reelection bid for a third and final term as governor.

“President Trump has done more than any other president has ever done to secure our border,” Abbott said in front of the unfinished border wall.

“In just five months, the Biden Administration has done everything it can to reverse President Trump’s border strategy, and their open border policies have led to a disaster at our southern border,” Abbott said. “Because of President Biden’s outright refusal to secure the border, the state of Texas is stepping up to continue the work of the Trump administration by building a wall and restoring law and order along the border.”

Trump said under his administration, federal security officials stopped the drug dealers and smugglers and halted much illegal activity across the border as a result of deals he made with Mexico, Honduras, Guatemala and El Salvador.

As a result of Trump’s agreements, criminals from these countries were not allowed to enter the U.S. or the countries would stop receiving funding.

Under the Obama administration when MS13 and other criminals were deported, their home countries wouldn’t take them back, he added.

“For years, these countries wouldn’t take them back,” Trump said, which is one reason why he stopped sending them funding. Then he got calls from their leaders, who said, “Sir, you’re not paying us anymore.’ And I said, ‘That’s right.’”

“They said, ‘Sir we would love to have MS13 back in our country. We think they are wonderful people,’” Trump said.

“And we were bringing them in by the thousands getting them out. And now they’re sending them back because what they are doing is they are opening their prisons and prisoners, murderers, human traffickers, all of these people, drug dealers, they’re coming in through the caravans, not everybody, but are coming in illegally,” he added.

“All Biden had to do was go to the beach,” Trump claimed. “If he would have just done nothing we would have now the strongest border we’ve ever had.”

He then described his “Remain in Mexico” policy, which Biden eliminated, and the Obama-era “Catch and release” policy Trump ended, which Biden reinstated, as examples of how “Biden is destroying our country.”

According to border patrol data, there’s been a 1,000% increase in the number of people who have come across the border illegally from last April to this April; the number of apprehensions has increased nearly 800%. Roughly 1 million people have been apprehended entering the U.S. illegally from more than 150 countries, Abbott said.

The result is that crime has skyrocketed in Texas, Abbott said, which is why the Texas Legislature allocated an additional $1 billion to Texas DPS to fight the crime surge.

“DPS Troopers will continue enforcing all state violations of law to include, but not limited to, criminal trespassing, criminal mischief, smuggling and human trafficking,” DPS spokesperson Erika Miller told The Center Square. “So far, during Operation Lone Star, DPS has made more than 1,780 criminal arrests and more than 43,500 migrant apprehensions and referrals. There have been 413 vehicle pursuits, and DPS has seized over 620 pounds of cocaine and methamphetamine, 142 firearms and more than $1.2 million dollars in the areas of the Rio Grande Valley, Del Rio, Big Bend and El Paso.”