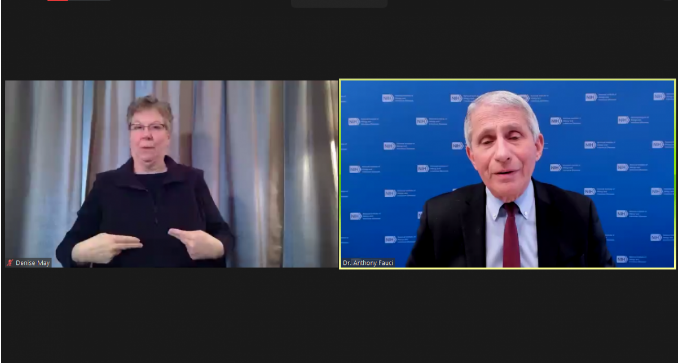 The question of how quickly Montana can vaccinate its population against COVID-19 hung heavy over two separate events Wednesday. In one, Gov. Greg Gianforte offered the public a mix of optimism and frustration regarding the current state of vaccination distribution. In the other, Dr. Anthony Fauci, director of the National Institute of Allergy and Infectious Diseases, told Montanans he expects life could be back to near normal by the end of 2021.

Gianforte’s statements came during an afternoon press conference update on Montana’s pandemic response. New cases and active hospitalizations continue to trend downward after a brief surge in early January, Gianforte said, while the number of vaccine doses administered is rising. As of Wednesday, he said, the state had administered nearly 190,000 doses and fully immunized more than 55,000 Montanans. Montana is still in phase 1b of its distribution, meaning the vaccine is being administered only to vulnerable populations, including people over 70, residents of congregate care facilities, frontline health workers and Native Americans and other people of color.

“We are saving lives with this approach by putting our health care workers and the most vulnerable at the front of the line for vaccinations,” Gianforte said. “But that takes us back to a familiar and frustrating refrain: We’re not getting our fair share of vaccines.”

According to Gianforte, the federal government continues to lag in allocating doses of the COVID-19 vaccine to the state. Gianforte hammered the point numerous times, saying that despite its rapid deployment of the doses it has received, Montana has consistently ranked 45th in the nation for vaccine allocation per capita. He said he and Montana’s congressional delegation have pressed President Joe Biden to improve the situation and succeeded in getting Missoula County added to a new vaccine program established by Biden this week.

Gianforte said he’s hopeful the situation will improve in the coming months. The FDA has authorized only two COVID-19 vaccines, and both require two doses. Several other vaccines are under development, including a single-dose vaccine from Johnson & Johnson, which could get a green light by early March. However, even with new vaccines on the horizon and increased production of existing vaccines likely, Gianforte was measured about the state’s current status.

“We still have a ways to go to get through the 1b category to make sure the vaccines get to the most vulnerable,” he said. “We’re going to work through that and then use the facts available to us to make the best decision so that we can continue to protect our communities.”

Fauci spoke about the same topics over the noon hour during a virtual question-and-answer session hosted by the University of Montana’s Mansfield Center. Appearing via Zoom, Fauci opened with a reflection on what he called “the worst example of a respiratory-borne pandemic in over 100 years.” Since the novel coronavirus began to spread in late 2019, tens of millions have been infected across the world, and more than 480,000 people in the U.S. have died. Fauci cautioned that the pandemic remains a real threat.

“I don’t think anyone could have imagined that things would have been this bad for over a year,” he said. “We’re making a lot of progress now, but we have been through a very, very extraordinary and historic experience that isn’t over yet.”

Even so, Fauci characterized the scientific community’s response to that threat as “beyond unprecedented.” Immunologists in the U.S. were already at work on a vaccine before a single sample of the virus arrived in this country, he said, and in less than a year succeeded in developing a vaccine he reassured viewers was “safe and effective.” Roughly 30,000 people participated in the Moderna clinical trial, and more than 44,000 participated in the Pfizer trial. The results of those trials were reviewed by a non-governmental board and by experts on an advisory committee at the FDA in a process Fauci stressed was both transparent and independent.

Fauci noted that state-level struggles with vaccine distribution are due primarily to the scope of demand nationwide, and should start to ease once supply catches up. However, he said he does see another hurdle to achieving widespread immunization in the U.S. The speed with which the vaccines were developed has led to public concern about their safety, a concern he acknowledged translates to hesitancy about getting vaccinated. Asked by Kaylee Kronsperger, a UM student studying human biological sciences, how rural physicians and others should go about countering such hesitancy, Fauci urged a soft touch.

“You’ve got to go step by step and counter the reasons for the skepticism, while at the same time not criticizing people for their skepticism, but respecting their skepticism,” Fauci said. “And then hopefully you’ll win over at least a portion of the people who have hesitancy about vaccinations.”

Winning over that population is key to fulfilling Fauci’s vision for the next nine months of the pandemic. The phrase “herd immunity” has been circulating for much of the past year, referring to the point at which enough of the population has been immunized to significantly reduce the likelihood of infection for those without immunity. Fauci said the U.S. will be close to that point when 75% to 80% of the population has been vaccinated. Masks and other health precautions may still be necessary then, but Fauci said he is confident that normal activities like going to movie theaters and dining in restaurants will be back on the table.

“If we can convince [people] to get vaccinated and get to that 75 to 80% of the population vaccinated, I believe that by next fall, middle to end of the fall, we can begin to approach a considerable degree of normality,” Fauci said.

This article was originally posted on Anticipating normalcy — but not yet