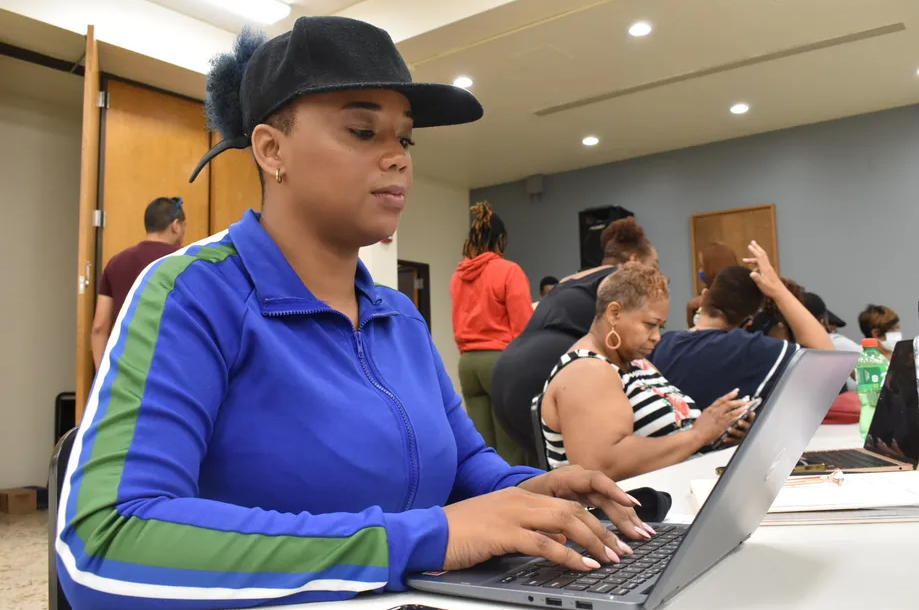 More than 60 adults sat around a rectangle of folding tables at Bronzeville’s Dr. Martin Luther King Community Service Center, Dua Lipa’s song “Levitating” playing in the background. A box of rain ponchos sat by the door, ready to shield the members of the city’s COVID-19 Community Response Corps during a day of educating fellow residents about the vaccine.

The room buzzed with anticipation.

For one lead vaccine canvasser, one goal is top-of-mind: Joe Hall wants to send his 11-year-old son back to Chicago Public Schools in the fall.

But he fears Chicago will again pull the rug out from under students.

Some parent members of the civilian COVID-19 response corps fanning out across Chicago worry that vaccine reluctance, a spike in cases related to the highly contagious Delta variant, and ongoing animosity between Chicago Public Schools officials and union leadership could sabotage efforts to reopen full time.

Interim CEO Jose Torres announced in June he’s set on a full-time in-person fall reopening, and the state has said districts should offer remote learning only in limited exceptions. Parents still want more assurance from the district — and more thorough communication about health and safety guidelines for the fall.

Last year, as his son’s grades started slipping in a remote CPS classroom, Hall pulled him from the district to enroll in Midlothian’s St. Christopher Catholic School, which was offering steady in-person instruction. Hall, who said private school tuition is “killing us,” would like to send his son back to Chinatown’s James Ward Elementary School, where he’d learn alongside his childhood friends. The district’s promise to distribute vaccines to of-age students in the coming months is another boon.

But Hall doesn’t trust CPS to keep its promise of a full-time in-person fall reopening. Although rates are still low compared to the pandemic’s height, infections are rising across the state, with the Delta variant making up a growing share of cases. Chicago Mayor Lori Lightfoot on Friday noted the increase and urged young people to get vaccinated if they hadn’t already. The same day, Los Angeles county reinstated its indoor mask mandate in an attempt to stem its coronavirus surge.

If infection numbers continue to creep up, Hall believes “CPS will just shut (in-person school) down.”

“There was no middle ground last year,” he said, referencing the district’s cautious approach to fully remote learning.

The path to a partial reopening from September to April was full of stops and starts, so it doesn’t come as a surprise that parents such as Hall are feeling déjà vu.

CPS pulled back from its tentative promise of hybrid learning in summer 2020 as COVID-19 cases rose, surveys revealed parent concerns about safety, and the union resisted its plan. Several reopening dates were then floated and shot down throughout the year, culminating in a contentious standoff between the district and the Chicago Teachers Union in the winter, before schools ultimately phased back in session in the spring.

Only pre-kindergarten and special education students have had the option of full-time schooling in the past 16 months. Under the hybrid model, the district’s schools only opened for most students a few days a week.

Parents have described the decision-making period as a bait-and-switch, with game-changing calls happening left and right. Some were confused and upset.

Even after the district partially reopened classrooms in April, some parents at the canvassing meeting said they still felt left in the dark.

Sharisa Vaval, a community health worker navigators supervisor with Community Assistance Programs, found out her son couldn’t attend Morgan Park High School for two weeks last spring when he was blocked from completing the school’s online health screening. But administration didn’t send notice that Vaval’s son had been in close contact with a Covid-positive student until she called the school several times.

Vaval has served on Wendell Smith Elementary School’s LSC in the past, so she’s well-acquainted with delays in communication from the district and understands complications with HIPAA law. Still, she said, the incident last spring was “terrible.” She’s not surprised that CPS has waited to update families on vaccination policies and the district’s reopening plan.

“CPS does everything at the last minute,” she said.

Maya Johnson, a contact tracing supervisor with Breakthrough Urban Ministries, felt a similar mix of relief and trepidation when her younger son returned to his elementary school last spring. To assuage her fears, she reminded herself that because she and her son had already contracted the virus, they carried some protection from COVID-19. Plus, the two needed a break from each other. With Johnson busy working and her son always close by, she felt a constant sense of guilt, anxious she couldn’t discipline him enough.

As she pushes for community members to receive their vaccines, Johnson says it’s essential for the district to reopen classrooms. To Johnson, the risk of leaving CPS children in abusive and neglectful housing situations far outweighs the risk of contracting the virus.

Besides, Johnson and other parents say, it’s hard juggling work and parenting remote learners. They are tired.