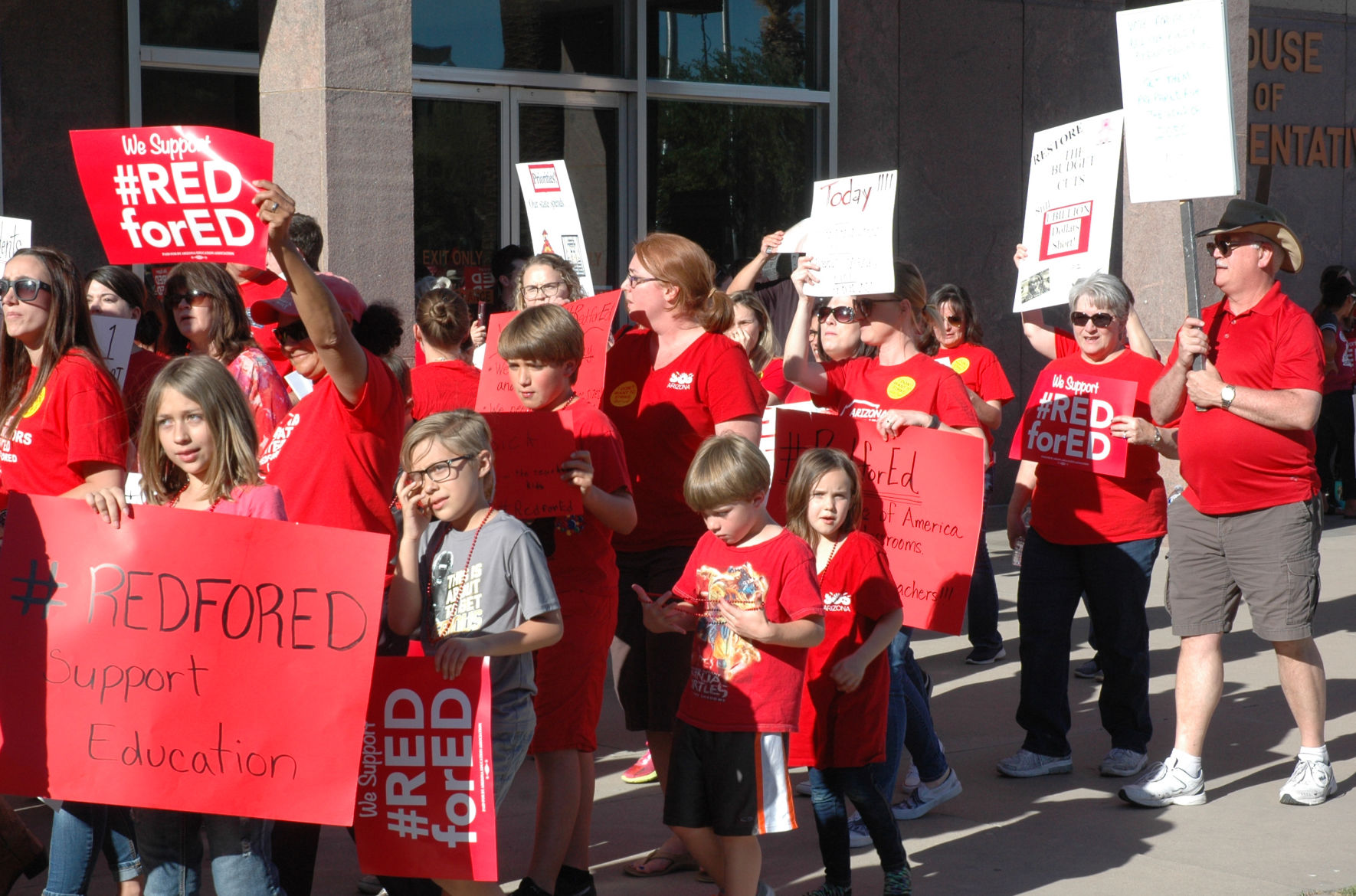 The call for such a massive pay increase comes amid a national debate about teacher pay, particularly in Republican-led states. Arizona’s teacher protests are coming on the heels of teacher strikes over low pay in West Virginia, Oklahoma and Kentucky.

And even if Arizona teachers’ pay were increased so dramatically, it would still lag the national average. When adjusted for costs of living, the median pay is $42,474 for Arizona elementary teachers and $46,070 for high school teachers, according to a 2017 Morrison Institute for Public Policy report. A 20-percent pay raise would bump those medians to $50,969 and $55,284, respectively.

The odds are stacked against teachers hoping to persuade the Republican-led Legislature and Ducey to increase education funding by as much as $750 million. Ducey has touted increased funding for the K-12 system in recent years and pledged to do more, but has stopped short of committing to fund increased teacher pay at any level.

And last year, he and GOP lawmakers balked at a proposal by teachers to increase salaries by 2 percent a year for two years, at a cost of about $100 million.

The primary reason given was that there simply wasn’t money available.

Although it is not entirely clear how much it would cost to meet the teachers’ demands, last year’s attempt to boost pay doesn’t bode well for this year’s effort. There are roughly 60,000 public school teachers in Arizona, and the estimates for increasing their salaries by 20 percent range from $680 million to $750 million.

The general fund budget for fiscal year 2018-19 that is currently being designed by lawmakers and Ducey is expected to be roughly $10.1 billion, of which approximately $4.5 billion will go to K-12 education.

If lawmakers and Ducey were inclined to find money for teachers, one place they could go looking is in the taxes that the state doesn’t collect: Arizona allowed more than $13.5 billion in taxes to go uncollected in fiscal year 2017, thanks to a litany of exemptions, deductions, allowances, exclusions or credits. And that number is likely to grow by another $1-to-2 billion once individual income tax deductions are tallied.

Arizona Department of Revenue data shows that more than half of all possible state taxes haven’t been collected for at least the past eleven years. Called “tax expenditures,” they amount to $137.7 billion since fiscal year 2008.

That figure is roughly equivalent to sum of state budgets spanning the past 15 years.

The majority of tax expenditures come from a variety of carve-outs to the transaction privilege tax, Arizona’s version of a sales tax. In fiscal year 2017, $12 billion was excluded from TPT collections, almost half of which was due to services being exempted.

Tax carve-outs on individual income taxes, corporate income taxes and property taxes account for almost all of the rest of the tax expenditures.

If Ducey or lawmakers wish to revisit existing tax expenditures, they will have to win the support of a legislative supermajority. An amendment added to Arizona’s constitution by voters in 1992 requires that any change to the tax code that results in increased state revenues, including removing a carve-out or reducing the expenditure it creates, be passed with a two-thirds supermajority in each legislative chamber.

However, legislation that creates new tax expenditures or expands existing carve-outs needs only a simple majority. For instance, a Senate committee on March 21 approved, along a party-line vote, a bill that doubles the amount of capital gains income that is exempted from the individual income tax.

The bill, HB2528, is sponsored by House Speaker JD Mesnard and will allow half of capital gains income to be tax-free. Legislative staff estimates the measure, if it becomes law, will cost the state more than $23 million a year when it is fully implemented in 2023.

According to an analysis by The Arizona Center for Economic Progress, a liberal think tank, roughly three of every five dollars in tax cuts under HB2528 will go to about 4,100 Arizonans making more than $500,000 a year.

The article was published at As teachers rally for higher pay, Arizona’s tax code exempts $13.5B from collection