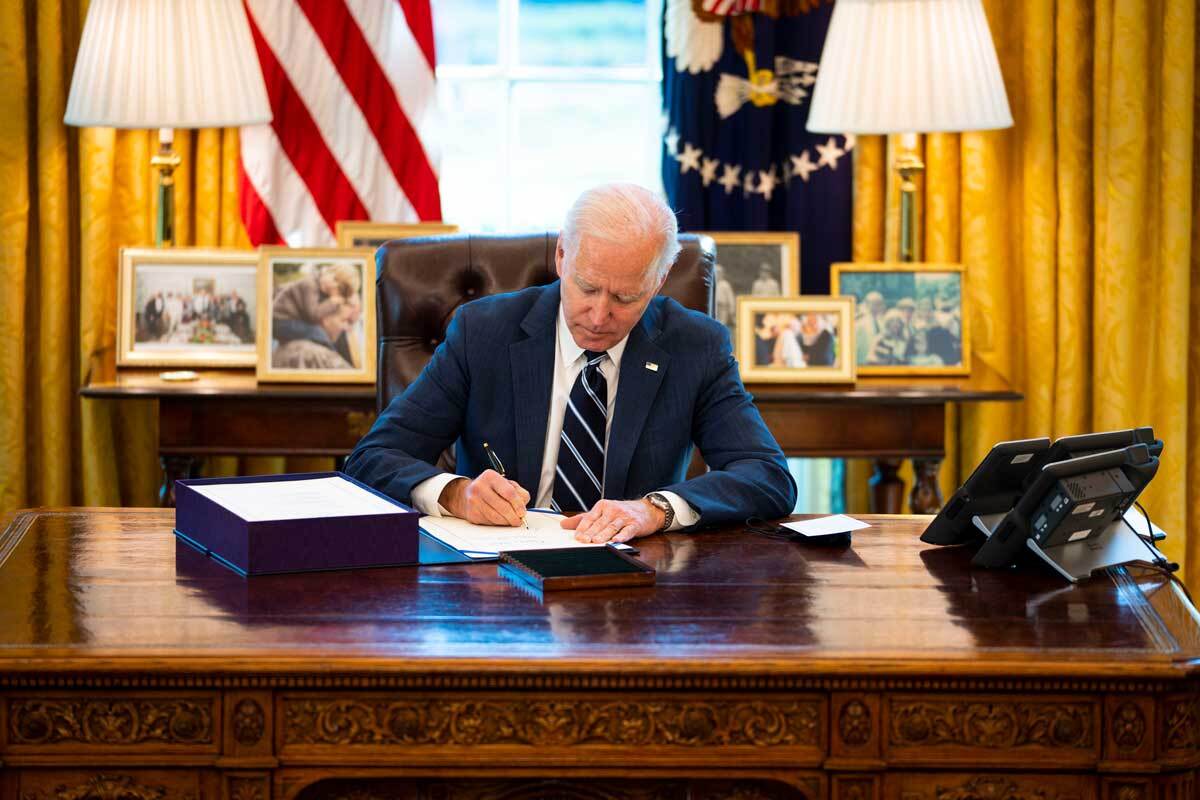 On March 11, 2021, Joe Biden signed into law a measure that was his top priority even before he took office: a $1.9 trillion spending bill to ease the year-long financial upheaval caused by the coronavirus pandemic. “This historic legislation is about rebuilding the backbone of this country,” said the new president, “and giving people in this nation, working people, middle-class folks, the people who built this country, a fighting chance.”

According to the results of a new survey by RealClear Opinion Research, a majority of Americans are simpatico with this legislation and support Biden in his dual “First 100 Days” quest of bolstering the U.S. economy and speeding up the nation’s COVID vaccination program.

Asked whether they support or oppose the administration’s relief plan, 68% of registered voters said they favored it, with only 27% against. And when asked to prioritize 17 national issues ranging from COVID-related matters to police reform and the Keystone pipeline, 80% of respondents named “getting the pandemic under control” – the highest-ranked issue – while Biden’s goal of getting 100 million vaccine shots into arms came in second at 76%.

Although sharp partisan differences reveal themselves when assessing Biden’s record in terms of how these two challenges should be met, large majorities of Democrats, Republicans, and independents all agree that tackling COVID and addressing the economic fallout of the pandemic lockdowns should be the focus of federal policymakers.

One discouraging aspect of America’s current era of hyper-partisanship is that attaching a president’s name to any particular policy causes it to hemorrhage support on the other side of the aisle. This was true with George W. Bush’s plan to partially privatize Social Security. Americans of all political persuasions were attracted to the idea – until Bush and the Republicans championed it. That’s when pundits and politicians turned against it, with rank-and-file Democrats following suit. The Affordable Care Act was an even starker example. As stand-alone ideas, facets of the legislation polled very well. Once it became “Obamacare,” it was a different story.

Biden’s huge COVID relief package is not immune from this phenomenon. In the RealClear poll, 40% of Republicans deemed the stimulus “important.” More than twice as many Democrats (83%) felt this way. (Independents, God bless them, were right in the middle, at 60%). Yet, when voters were polled on the details of the stimulus, support among Republicans increased. This might surprise fiscally conservative critics of the plan. They point out, correctly, that hundreds of billions of dollars goes for expenditures, such as bailing out troubled multi-employer pension plans, that have nothing to do with the pandemic. Still, the more voters know about this law, the more they tend to like it – Republicans included. Delving into this more deeply, RealClear Opinion Research provided the poll respondents with two dueling explanations of the package:

Some say that spending $2 trillion dollars on a massive bill that only directs 1% towards vaccines, ignores the science on reopening schools, and is stuffed with non-Covid related spending is irresponsible. The economy is already improving and even top liberal economists say it is wrong for this recovery.

Others say that the need to act is clear. Absent additional government assistance, the economic and health crises could worsen in the months ahead, schools will not be able to safely open and vaccinations will slow. By the end of this year, this law alone will create 7 million new jobs.

The first view, the Republican critique, got 45% support. The second, which is the Democrats’ explanation of its agenda, got 55% support. What this suggests is that America is at a pivot point – and that this time, at least, voters are looking to the government for answers. Forty years ago, Ronald Reagan declared in his inaugural address, “In this present crisis, government is not the solution to our problems; government is the problem.” At the time, it was a popular, if not universal, view: Reagan had won handily in 1980 and would win in an utter landslide four years later. But it’s not the prevailing national sentiment today. In this present crisis, a working majority of Americans seem to want an activist federal government to help set things right.

Although then-Sen. Joe Biden apparently didn’t attend Reagan’s first inauguration, he was there in 1985 for the reelected president’s second inaugural address, a speech Biden described as “brilliant.” But the national mood is different today, and Biden is looking to previous Democratic presidents for inspiration, one in particular.

“This is a little bit not unlike what happened in 1932,” Biden said in December. “There is a fundamental change not only taking place here in the United States but around the world. We’re in the middle of the Fourth Industrial Revolution, where there’s a real question of whether … [with] all the changes in technology, will there be middle class? What will people be doing?”

Biden is alluding to the challenges faced by his birth president, Franklin D. Roosevelt, the Democrat who was Ronald Reagan’s first political hero. FDR was also the president who popularized the concept of a president’s “first 100 days.” Roosevelt pushed for congressional passage of, and then signed, 15 major pieces of economic legislation in his first weeks in office (it was 105 days, actually, but that’s nitpicking). These bills, all aimed to blunt the force of the Great Depression, forged the foundation of the New Deal.

Biden isn’t alone is seeing parallels between now and those foreboding days in the 1930s. Historian Robert Dallek, author of a 2017 FDR biography, noted in a recent interview with NPR host Steve Inskeep that the Depression, coupled with the rise of Stalin in Russia and Hitler in Germany, had millions of Americans questioning whether free market, Western-style democracies could compete in the world or protect its citizens. “There was a lot of sentiment that maybe this is what the United States needed to do, to move on from democracy,” Dallek said. “But Roosevelt would never go there. He was a believer in democracy and in preserving it in the United States and making it seem again like the best future for the country.”

One can overstate the comparison, but a key conclusion that may be drawn is that the details of the COVID relief plan are less important than voters’ confidence that the government is at least trying to work on their behalf. Politicians’ motivations count. Did the New Deal lessen the length of the Depression? That’s debatable. But millions of working-class people, including Ronald Reagan’s father, fed their families because they got a government job in a program launched by Franklin Roosevelt — and they never forgot it.

Americans are savvy enough to realize that the “First 100 Days” is an artifice, just as it was in FDR’s time. There’s nothing magical about 100 days — Biden actually signed the COVID relief bill on his 50th day in office — but voters also put a premium on a president hitting the ground running in a time of national hardship. Some of the comments from the RealClear survey respondents bear this out:

Not everyone is thrilled with Biden or his policies, of course. Here are three criticisms leveled by other poll respondents.

One frequent complaint from conservatives dismayed by the new administration’s big government approach is that Joe Biden ran for a president as a “centrist” but is governing like a woke progressive. There is something to this, but the premise is inexact. Although Biden may have been a moderate through much of his Senate career, he campaigned in 2020 as a mainstream liberal in a liberal political party that has been moving steadily to the left. His critics point to Biden’s oft-repeated vow to promote national unity. But although seeking common ground on public policy and governing from the center may be first cousins, they are not identical twins. Voters seem to get this. Moreover, Biden’s current policies were his campaign promises. And at this point in his presidency, his favorability rating is 55%, compared to 42% unfavorable. (These numbers are inverted for Donald Trump, who remains under water.)

The RealClear Opinion Survey results come in the context of a lethal pandemic that first struck this country in an election year and has now taken 542,000 lives while exerting a crushing effect on the economy. Certainly, Trump believes the virus cost him reelection – he’s said so directly — but the difference in Biden and Trump’s popularity can also be explained by their divergent approaches to the virus. Yes, Trump closed down international flights (and did so before Biden thought it necessary) and he also funded Operation Warp Speed, which rapidly led to a vaccine. But the former president’s attention on the issue waxed and waned, and he spent the two months after his defeat contesting the 2020 election returns instead of pushing the federal bureaucracy to speed up the vaccine rollout.

By contrast, Biden took his cue from his birth president, not his predecessor. FDR ran for reelection in 1940 vowing to keep his focus on economics — and keeping America out of world war — yet when Pearl Harbor was bombed, he switched gears instantly, telling a close White House aide that “Doctor New Deal” had just become “Doctor Win-the-War.”

This is closer to Biden’s approach, and it’s reflected in his poll numbers. A presidential “honeymoon” period might seem unlikely in our bitterly divided country, but Biden is getting one. His favorability rating was in the high 40s through most of last year, until the November election when it climbed into the mid-50s. No, this is not a Hawaiian-vacation-at-a-five-star-resort honeymoon for Biden, but it’s not nothing, either. A nice family hotel at the Delaware shore, perhaps.

This latest RealClear Opinion Research poll, conducted March 12-17, surveyed a representative cross-section of 2,009 registered voters, 37% of whom self-identify as Democrats, 33% as Republicans and 29% unaligned. Asked whom they voted for the 2020 presidential election, the respondents broke down 52%-47% for Biden over Trump, with 1% voting for other candidates, closely mirroring the final tally in the national popular vote.

Other highlights of the survey include:

Biden’s popularity, as well the public’s affinity for the Democrats’ COVID relief package, seem to have transferred to Congress. Asked in the RealClear survey to assess congressional Democrats, the public’s views were split almost evenly: 48% said “poor” or “not so good,” while 47% answered “excellent” or “good.” For congressional Republicans, however, the findings were pretty grim: only 34% excellent or good, compared to 61% not so good or poor. (The balance in both groups answered “don’t know.”)

The president’s frequently expressed optimism also seems to have infected the country’s mood. For the first time in decades, those who think the country is on the “right track” (40%) are as numerous as those who answer “wrong track.” (The rest, 20%, are unsure.)

If it seems that “red” state governors and Republicans in Congress are placing a much greater importance on reopening schools and businesses in the service economy, there’s a reason: That’s overwhelmingly where GOP voters are. While 56% of Democratic respondents said it was important to reopen public schools five days a week, 73% of Republicans (and 61% of independents) feel this way. A similar dichotomy between Republicans and Democrats exists when it comes to reopening bars, restaurants, and other establishments in the service economy.

The American people certainly do consider what’s happening at the U.S.-Mexico border to be a “crisis,” irrespective of the coy messaging coming out of the White House. Moreover, this is not a partisan perception. Although rank-and-file voters may be focused on different aspects of the border surge of migrants, there is simply no difference by party affiliation: 71% of Democrats, 70% of Republicans, and 69% of independents want the government to deal with the immigration emergency.

Finally, to reemphasize this point: When the $1.9 COVID stimulus bill is simply called the American Rescue Plan, only 41% of GOP respondents support it. But when the details of the legislation are explained, this rises to 54% — among Republicans. There are increases as well with Democrats and independents, but much smaller ones. Maybe, just maybe, and in only half his first 100 days, Joe Biden succeeded in nudging this polarized country in the direction of unity after all.