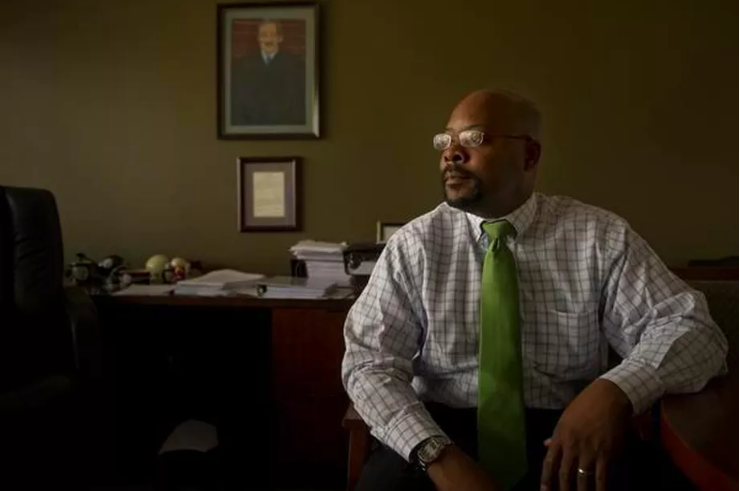 The Aurora school board has called a special meeting to discuss the actions of Superintendent Rico Munn after he sent a letter to all district employees accusing Aurora teachers union leadership of “dishonest and inappropriate” claims in an ongoing and public dispute over how to handle education in the pandemic.

The Tuesday meeting has only one agenda item, a personnel matter, but, unlike most personnel discussions, this one will be public. There will not, however, be public comment.

Board member Marques Ivey confirmed that the meeting was called by the majority of the board to discuss the superintendent.

“We’re going to evaluate the situation as a whole to see what happened,” Ivey said.

Aurora’s superintendent and the teachers union have been at odds several times over the years, including over when and how to offer in-person instruction during the pandemic. The school board, whose majority was elected with union support, has played a more hands-on role than others, sometimes overruling Munn on school opening decisions. The disagreements heightened tensions between the board and superintendent over the proper role for each of them.

A recurring concern from the board is whether Munn has done enough to engage the community or teachers about difficult decisions.

The most recent dispute started over plans to consider eliminating asynchronous learning Fridays. After an unplanned and heated discussion of the idea at last Tuesday’s school board meeting, the superintendent sent a sharply worded letter to all district staff members in which he disputed union claims and accused the union board of operating in a divisive manner.

Munn described the approach taken by union leadership as “emblematic of a growing and intentionally divisive tone” and “a desire to not have a genuine working relationship that benefits both staff and students.” Countering union claims, Munn wrote that he consults regularly with teachers, and the district has followed science and data in its reopening decisions.

Ivey said he was concerned that the letter had gone out to all staff and not just the board of education. For those who may have seen the letter and felt confused, “the board has received it, and the board is taking action.”

But his main concern, he said, is to consider if the district’s “top executive is operating in a fair and professional manner,” and whether employees feel like they’re getting the best from their leadership.

“I think it’s important to evaluate those things,” Ivey said. “I can’t tell you how the meeting’s going to go. You hope these things can be repaired. That staff can feel confident in the leadership and the board can move forward.”

Munn said Saturday he felt the district had to respond publicly to correct the record after claims he considered dangerous were included in a letter sent by the teachers union’s board.

“Everything we do is public,” Munn said. “I don’t think a distribution list matters. It’s a public letter one way or another.”

Munn also said he has received comments from staff who “reached out to support what I had to say. I think people appreciate hearing the truth directly from me.” Personnel matters can be discussed in closed executive session, but Munn said he chose to make Tuesday’s special meeting public given that the meeting will be about two public letters.

“There was no victory for APS children in this style of communication both ways,” board member Kevin Cox said. “I believe every member of our staff deserves to be treated with the utmost respect. Whether or not that communication was explicitly in violation of a particular policy, it robs our staff of dignity that I believe they deserve. They have too much on their plates to deal with right now, and I always support workers.”

In the district’s most recent written update on increasing in-person learning, Munn noted that the district was considering whether to change the asynchronous learning day. Up until now, the district has left Fridays as a day for students to do independent work to allow teachers more planning time. Munn told the school board he is concerned that student engagement drops significantly on Fridays.

As of mid-February, Aurora elementary students have the option to go to school in-person four days a week every week, while middle and high school students remain on a hybrid schedule. Students in all grade levels and all learning modes still have Fridays as a virtual independent work day.

Leaders of the teachers union responded to the update with a letter of their own, sent to the board but not the superintendent, arguing that Munn has not taken teacher voices into consideration in these plans.

“Since the Board of Education ceded control of COVID and learning model decisions back to Superintendent Munn, he has forced through and rushed major changes without regard to concern from teachers, building leaders, and the community,” the union’s board of directors wrote. “Mr. Munn continues to misrepresent the voice of [the Aurora Education Association] and has not included the association in any decision making or solicited input since before winter break.”

Munn specifically denied that and said the letter itself contradicts those claims.

Union President Bruce Wilcox could not be reached for comment Saturday.

After Munn gave the board his regular update on the status of in-person learning, board members asked questions about the union’s claims. They then brought in Wilcox, the union president, and mediated a short back and forth spat between the two leaders.

During the meeting, Munn called the union’s letter “offensive” and said it “grossly misstates and misrepresents any number of things.”

Wilcox kept his comments brief but explained that teachers who are providing instruction at the same time to students who are in front of them and who are on the other side of a screen need the extra time to plan.

Shortly after that exchange, A.J. Crabill, a consultant from the Council of the Great City Schools who has been working with the board to improve their leadership, criticized the board for that interaction. When the board president tried to explain that board members felt they had to evaluate if the superintendent is following their guidance to always seek input from staff and community, Crabill told them that the discussion had not accomplished that.

“You received no meaningful data from your superintendent regarding this compliance, so you have no better clue,” Crabill said. “Don’t confuse that for ‘this is us monitoring.’ That did not happen this evening. You just had a random conversation.”

Crabill has encouraged the board to be less involved in every decision Munn makes and instead practice regularly scheduled monitoring of their goals. On Tuesday, he told the board that if his boss tried to evaluate him the way the board just had, he would not feel valued or supported as an employee.

Ivey said that in asking questions about the letter, he didn’t mean for the discussion to devolve into that public argument. “It was meant to generate discussion,” he said.

In the letter Munn wrote after the meeting, he said he wanted to correct the misinformation that was in the union’s letter, including that he has not consulted with teachers and other staff.

“It’s my responsibility to make sure that, particularly in a time of crisis, that truthful information is communicated to our community and to our staff,” Munn said in an interview.

In the letter, he added, “My deepest hope is that a clear response can allow us to move our focus back onto serving our students in the safest and most appropriate environment we can provide.”

Asked if he was concerned about keeping his job, Munn said he stands by his actions and is dedicated to the district and its students.

Munn’s current contract goes through June 2023. The board can choose to end the contract early for certain reasons such as “incompetency, neglect of duty, immorality, unsatisfactory performance, insubordination,” or criminal convictions. To do so, the board must give the superintendent three business days advance written notice of the alleged cause.

Otherwise, the board may terminate the contract by paying a severance, which must be $200,000 if the termination happens before June 30, 2021.