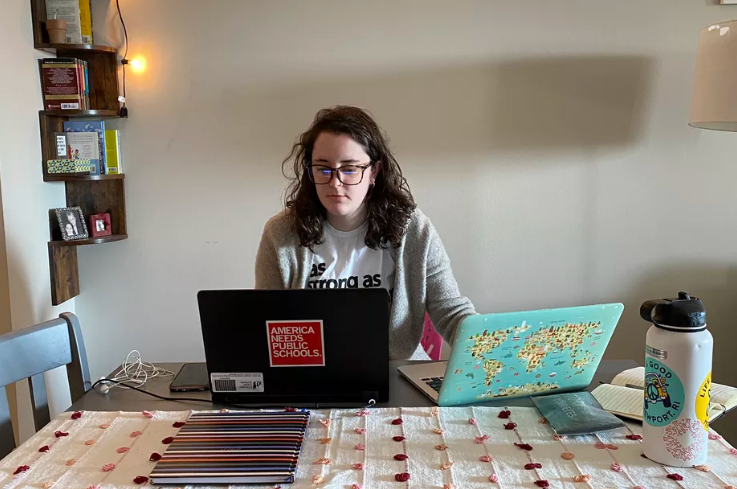 Each time Marilyn McCottrell, the principal at Fuller Elementary on Chicago’s South Side, looks up from her desk, she sees a whiteboard rippling with clusters of color-coded Post-It notes with student names.

As the pandemic has brought new urgency to helping students catch up, she and her educators track whether they meet grade-level standards through a digital tool. She also uses the Post-It notes to pay closer attention to two groups: special education students and Black boys.

A national debate is raging over the extent of the pandemic’s academic fallout, and a string of studies have offered widely diverging estimates.

Even amid broad consensus that the coronavirus has deeply disrupted learning, especially for vulnerable students, the term “learning loss” has become politically charged in heated standoffs over reopening schools.

Some Chicago schools have already started looking for ways to address the pandemic’s disruption. Some have expanded one-on-one tutoring for students; others, such as Fuller, are leaning on an intentional strategy for small group instruction and on pushing students to forge ahead rather than remain stuck on material they did not master in previous grades.

Chicago leaders have said they are working on a districtwide plan to address learning loss, an undertaking that could claim a significant portion of the roughly $720 million the district received from the second federal stimulus package.

There are no details yet, but district officials have said that the most pressing learning loss remedy is to reopen school buildings, even as some critics argue that focus leaves out students who are sticking with virtual instruction.

At Fuller, McCottrell said it’s not productive to argue over semantics or expend too much energy quantifying what learning might have been lost.

“We know learning loss is there,” she said. “But if you concentrate on what you don’t have, you lose the opportunity to move kids ahead. I don’t want this to be another excuse why kids can’t achieve their dreams.”

It is not clear how Illinois districts will assess the extent of any learning loss. The pandemic has upended the state’s typical testing schedule, and recently more than half of Illinois school superintendents signed an open letter urging the federal government to waive assessments this year.

Morgan Conneely, a language arts teacher at Fuller, recently pulled a handful of seventh-graders into a virtual breakout room to read about New Hampshire during the Revolutionary War.

Fuller, where the student body is overwhelmingly Black and low-income, has long prided itself on a small group culture. In previous years, Conneely might have offered the group of struggling readers a simpler text. Now, she encouraged them to read material chock full of complex vocabulary and sentence structure — the same reading she uses with her more advanced students.

With a grant from the Chicago Public Education Fund, Fuller set out in the fall to reimagine how teachers work with students in small groups, with the long-standing goal of bringing children up to grade level. Teachers get extra time to plan in teams, designing small group instruction, assignments and assessments that all get at grade-level standards in unison.

McCottrell said there has been a key shift. Small group interventions once focused on remediation, covering academic ground students missed in previous grades. Meanwhile, peers who were already at grade level pulled further ahead, widening disparities.

Now, the focus is to narrow the academic gulf with their peers as quickly as possible by offering them extra support.

Nationally, educators and their unions have pushed back against the idea of a pandemic-caused learning loss, wary of its use to argue in favor of reopening school buildings.

In January, as it faced off against the district in tense school reopening negotiations, the Chicago Teachers Union tweeted that learning loss is “a rather shallow, naive and ridiculous concept.” It suggested that to argue students have lost academic ground is an affront to educators who have worked hard to make the most of remote learning.

Earlier studies that attempted to quantify the extent of academic setbacks appear to have significantly overestimated them. Still, with more research emerging, there is also growing evidence that many students are behind where they would normally be, and these effects are much more pronounced for low-income and other students who already faced disparities before the pandemic.

Constance Lindsay, an education professor at the University of North Carolina, said she sympathizes with concerns that learning loss is weaponized to push for reopening. She said she is reminded of how the concept of “achievement gaps” was used to promote some policies that ultimately harmed students of color. The pandemic is a “cohort-level, global shock,” that affects students across the board, Lindsay said.

Still, she said, districts are eying some promising strategies to address disruption such as beefing up summer school offerings or launching large-scale tutoring efforts.

“Getting kids on grade level is the priority,” she said. “That means some kids will need extra resources to get up to speed.”

Conneely, the seventh-grade teacher at Fuller, said she pulls out students at similar reading levels in groups of three or four several times a week. She often works with them on the same or similar texts, asking more challenging questions of her more advanced learners.

With the Revolutionary War text, for instance, she asked her less-advanced readers about the setting and what they learned about the war. With more advanced students, she dove into word choice and sentence structure.

She said students who struggle with reading balk at getting assigned texts clearly intended for much younger children. They have responded well to the more challenging material, she said.

Marley Olivera, an eighth-grade language arts teacher, said she meets more frequently in small groups with students who are below grade level, while the rest of the class works on more independent activities with a teaching assistant. She offers more accessible texts, but sticks with teaching grade-level reading comprehension skills.

“If I keep students at a fourth-grade level, we won’t have time to close that gap,” she said. “Students feel defeated. Now they say, ‘This is a little bit challenging, but I can work through it.’”

Educators at Fuller say parents, teachers and staff have rallied to support remote learning. For many students, that collaborative effort has minimized the pandemic’s disruption. But Olivera worries that hasn’t always been the case for students who were struggling before school buildings closed.

“For students who were already behind grade level, the effects will be around for years,” she said.

Steven Guy, a member of the school’s local council whose grandson is a seventh-grader there, said parents like him know instinctively that students have lost some ground.

A critic of the amount of screen time the district has required, he said he often wakes up his grandson in front of his computer or nudges him back when he takes a break from the gauntlet of virtual classes. The boy’s grades have lapsed, and the social and emotional fallout from protracted isolation compound the academic setbacks.

“His focus isn’t on learning because it’s too easy to get distracted,” Guy said.

Other schools are taking different approaches. Curie High School, on the city’s Southwest Side, has expanded its tutoring program. The school recently hired additional tutors fluent in Spanish or Cantonese to work with bilingual students, who have faced steeper hurdles.

In an interview with Chalkbeat, Chicago schools chief Janice Jackson also stressed the importance of moving away from remediation in addressing learning loss. The focus instead should be on providing students who are below grade level additional resources to accelerate learning, she said.

Jackson said the district is in the early stages of planning, but the effort could involve a longer school day or more after-school programming.

“A lot of that is going to be predicated on the additional funding that we received from the federal government because all of our ideas and plans cost a lot of money,” Jackson said.

The projects these campuses pitched ran the gamut from efforts to better engage students and families, such as home visits, to plans to buy more instructional supplies or adaptive software for students with disabilities.

Chaula Gupta, the Fund’s vice president, said she was struck by how many applications reflected a sense that this moment of disruption offers opportunities to innovate — and speed up learning for students.

“The underlying theme for almost every application was learning acceleration,” she said.

Last week, the nonprofit A Better Chicago also announced the launch of a program called Chicago Design Challenge with backing from some of Chicago’s philanthropic heavy-hitters, an initiative to help fund  “promising innovations to accelerate learning recovery and promote well-being.”

At Fuller, McCottrell said the school is seeing promising results from its small-group push, particularly in reading. Chicago elementary schools are gearing up to reopen for students in March, but educators say they expect the small-group instruction will remain virtual.

McCottrell looks forward to kicking the effort into higher gear down the road.

“When kids come back — man, we can probably change the world,” she said. “We can make a big difference.”