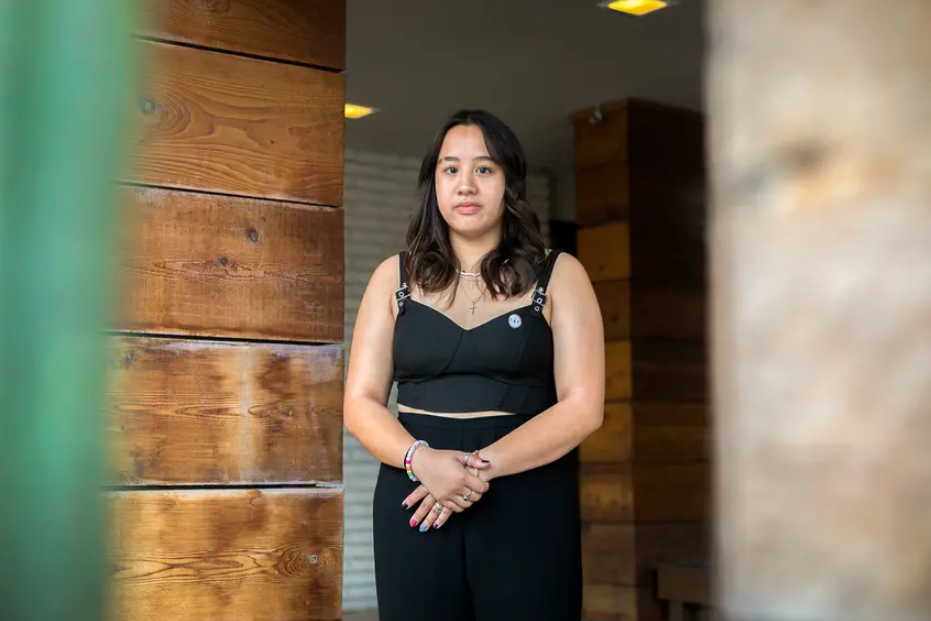 LGBTQ students at Baylor University have been pleading with school leaders for years to officially recognize a group on campus, which would not only allow them to meet on campus and qualify for school funding, but also affirm for queer-identifying students there is a place for them within the university community.

The request for recognition by Baylor students has been consistently rejected.

But this spring, the university’s board of regents narrowly opened the door for a change. They passed a noncommittal resolution that will allow university leaders to explore the possibility of approving a LGBTQ student group in an effort to be a more “caring community.”

Yet the board simultaneously stressed the school was not abandoning its official position on human sexuality, which states marriage is between a man and a woman. In that statement, Baylor writes that “it is thus expected that Baylor students will not participate in advocacy groups which promote understandings of sexuality that are contrary to biblical teaching.”

The school’s action drew questions and concerns from both proponents and opponents of the effort to recognize the LGBTQ group on campus, with both sides appearing to agree that Baylor is sending mixed messages with seemingly conflicting stances.

Students like LaVergne said while the resolution is a step in the right direction,they’re skeptical Baylor can create a group that would be palatable to queer students, given their unrelenting position on issues like gay marriage. Meanwhile, conservative Baptist leaders characterized the move as Baylor caving to progressives.

“Baylor University is trying to have its cake and eat it too,” said Albert Mohler, president of the Southern Baptist Theological Seminary, on an episode of his daily podcast. “The reality is that it still wants to present itself as, in some sense, a Christian institution, a Baptist institution. But what we’re looking at here is just another way of getting to surrender to the moral revolution without admitting that that’s what you’re doing.”

Whether Baylor ultimately approves a LGBTQ group remains to be seen. University officials declined multiple requests to discuss the May decision with the Tribune, insisting in a statement that they are waiting until students return for the fall semester to discuss what the new group might look like, and using the summer to plan a process to approve a group.

But the university’s murky, sometimes fumbling announcement over a nonbinding resolution illustrates the tightrope officials are trying to walk as the school attempts to remain aligned with its interpretation of Christian tenets while also trying to respond to a changing world where inclusivity and diversity are increasingly emphasized.

After Baylor’s board of regents passed the resolution about the LGBTQ group in May, the school laid out an explanation in a two-page document posted on the school’s website. The document answered questions like “Why is Baylor taking action now?” “Why establish a chartered student group?” and “Is Baylor changing its stance and policies on human sexuality?”

The tone of the document was empathetic to the LGBTQ student experience. It suggested that faith and inclusion don’t have to be mutually exclusive.

“Inaction is a disservice to our students. Their wellbeing must be our priority. We have the opportunity to reach out to and care for our LGBTQ+ students at this critical point in their lives and provide them support,” the document said. “Baylor has the opportunity to demonstrate how a faith-based institution can strengthen care for LGBTQ+ students that rises above the cultural landscape and remains true to our mission and values.”

But the document was taken down sometime after May 19. Screengrabs of the document were captured and posted on a conservative news site.

Asked about its removal, university spokesperson Jason Cook said the board’s resolution “speaks for itself.” The resolution text is slightly more than a page and reaffirms Baylor’s “core commitments” of its Christian mission.

“We wanted to ensure clarity regarding Baylor’s position and next steps,” Cook said in an email.

Justin Tidwell-Davis, a queer Baylor alumni who has advocated for more inclusivity of LGBTQ students on Baylor’s campus, said he thought it was “interesting” Baylor removed the document. While he thinks it had some flaws, he said he appreciated its attempt to provide some compassion for the experience of LGBTQ students on campus.

“The statement by the Board of Regents makes no such effort,” he said in an email. “This indicates to me that even the tiny amount of support indicated by the document was too much for Baylor’s donors and prominent conservative Baptist public figures.”

In the now-removed document, Baylor officials cited an increase in reports of bullying and harassment of LGBTQ students on campus as one reason they are considering a chartered group. The document also pointed to national statistics that show LGBTQ students have higher instances of mental health challenges.

Veronica Penales, a rising junior who identifies as queer, said she’s one of the LGBTQ identifying students who has faced discrimination on campus since she started at Baylor University in 2019. The first time she was called a homophobic slur happened after she posted a photo of herself on Instagram running the Baylor flag across the field at a football game with a Pride flag painted on her leg.

“There were simple sticky notes that said f-a-g,” Penales said. “I kept getting them day after day, week after week.” She said when she reported it to her residence hall leaders, nothing happened.

The Post-it notes on her door, Penales said, were in response to her work trying to convince the university to recognize the LGBTQ student group. Last October, she served on the Baylor student Senate and lobbied for approval of a resolution calling on the school to rethink its human sexuality statement so a group for queer students could exist. It passed 30-15 after intense debate, she said. Earlier this year, Baylor’s Faculty Senate also approved a resolution in support of the chartered LGBTQ student group.

In the past few years, the cries for Baylor to approve a LGBTQ group have grown louder among students, faculty and alumni.

A 2019 petition, which has garnered at least 3,200 signatures, urged Baylor to reverse its stance. It argued Baylor’s decision to allow a young conservative group to bring a controversial speaker to campus at the time, despite his homophobic and sexist views, demonstrated Baylor’s unfair treatment of some student groups versus others.

Students and alumni who support an official LGBTQ group also point to various political student groups on campus that promote ideas that don’t align with Baylor’s. They noted recent instances where conservative groups that have been approved by administrators have made controversial statements without rebuke.

Earlier this year, the Young Conservatives of Texas at Baylor caused a controversy when they wrote in a flyer for a campus event that “American slavery, and its legacy are incomprehensibly ordained by God for ultimate good.”

“A single tweet from a group of students does not represent the institutional values, beliefs and policies of the University,” Cook said in response to emailed questions.

Religious conservatives disagree that Baylor can remain a Christian university while also opening its doors to people whose lifestyle goes against their interpretation of biblical teaching. Speaking on a conservative radio talk show after the regents passed the resolution, a Texas pastor said Christian families shouldn’t send their children to Baylor.

“What they teach and the underlying philosophy is anti-Christian,” First Baptist Pastor Robert Jeffress said on Todd Starnes’ radio show. “And I don’t think any true Christian parent who wants their kids to have a Christian education would allow their child anywhere near Baylor University.”

There have also been outspoken groups on and off campus that have pushed back against any university changes, asking the university to adhere to its “traditional values,” including a petition urging the regents not to approve a LGBTQ group. That petition garnered around 110 signatures.

Given the intense pushback from some members of the Baylor community and within fundamentalist Baptist groups, LGBTQ student leaders say they’re skeptical the school will sign off on a group that would truly reflect them and worry it will be an LGBTQ group in name only.

“If Baylor wants to limit us in any sort of way as an organization that other organizations are not subjected to, then we don’t want that official chartership. Then, we want to continue the community that we’ve already put in the time and the effort and love into,” LaVergne said.

LaVergne said leaders in GAY have already agreed they will not join a group where they must provide an official student roster, since some students do not publicly share their gender identity, or if they are subject to rules or requirements that are not required for other student groups.

They also said they will not participate in a group that supports or discusses conversation therapy, the attempt to try and change someone’s sexuality through psychological or spiritual practices. Baylor officials have not suggested any such requirements and President Linda Livingstone has said previously that Baylor counselors do not support or promote this kind of therapy.

Baylor has long grappled with how to satisfy fundamentalist supporters while adapting with the times and has taken longer to adopt campus policies that reflect the changing world. The school integrated in 1963, eight years after the Baylor Student Congress called on the university to end segregation. They removed a ban on “homosexual acts” from its sexual conduct policy six years ago and didn’t allow dancing on campus until the mid-1990s. These strict rules have garnered criticism over the years and the Princeton Review has labeled it an LGBTQ unfriendly school year over year.

Shane Windmeyer, executive director of Campus Pride, a national group that tracks how welcoming colleges and universities are to LGBTQ students, said the group also expects to add Baylor to their “Worst List” this year, which names the colleges least supportive of LGBTQ youth.

Beyond its own campus community, Baylor is also balancing external pressures that could affect its status as a research and athletic powerhouse.

The regent’s resolution came shortly before the federal government recently affirmed that LGBTQ students are protected under the federal civil rights law that bans discrimination based on sex, Title IX. Under that law, religious universities are allowed to apply for a religious exemption, which allows schools to enforce certain rules if the university is “controlled by a religious institution” or such rules “would not be consistent with the religious tenets of such organization.”

The religious exemption portion of Title IX is the focal point of a recent class action lawsuit filed by a group of LGBTQ students who are enrolled at or attended federally funded Christian colleges and universities against the U.S. Department of Education, including Penales at Baylor. The students claim that a religious exemption clause is unconstitutional.

Baylor applied for a religious exemption regarding issues of “premarital chastity” in 1976, which was later granted in 1985 under President Ronald Reagan. A Baylor spokesperson said the university has not applied for another exemption, because its position is that it is unnecessary given the university’s First Amendment rights.

Recently, the Council for Christian Colleges and Universities, which Baylor is affiliated with, asked a judge if they could intervene in the case to argue for the religious exemption clause, a request opposed by the U.S. Department of Education. The plaintiffs are waiting for a judge to rule on the request.

Meanwhile, some LGBTQ advocates said they feel the university’s recent resolution is simply an adjustment to the times as queer student organizations have become the norm across the country on college campuses.

“It’s good for their business, their finances, their sports teams,” Windmeyer said. “You cannot be an institution of higher learning and discriminate against a group of people that are your students.”