Please ensure Javascript is enabled for purposes of website accessibility With samba, this Harlem music teacher turned a 50-student class into an asset - Mid Year Media Review
Skip to content 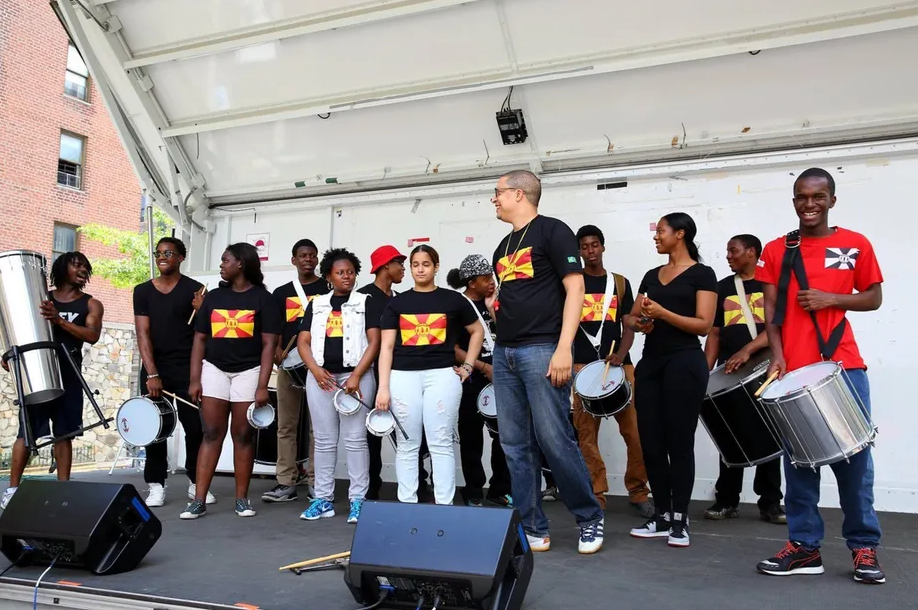 The moment music teacher Dana Monteiro witnessed a samba school rehearsing during a trip to Brazil in 2005, he knew he wanted to bring those hypnotic rhythms and percussive beats back to his own music classes at Frederick Douglass Academy in Harlem.

“I didn’t know anything about samba, but as soon as I got back to school, I gave the principal a small list of drums to buy, and we got started,” said Monteiro, who has taught high school music at Frederick Douglass for nearly 20 years. “It took off, and we purchased a few more drums each year.”

Monteiro, trained as a classical trumpet player, started teaching samba to a group of 12 students after school. The style proved popular with students, who, regardless of musical ability, were able to take on a unique role in the group. Rooted in Afro-Brazilian traditions, samba music features polyrhythmic drumming that tends to bring people to their feet. Ensembles, called samba schools, perform at the Carnival in Rio each year and, thanks to Monteiro, are now in Harlem, too.

Eventually, Monteiro’s student group expanded to become Harlem Samba, an ensemble that involves over 300 students a year and was a featured performer at a Clinton Global Initiative event.

In 2017, Monteiro founded A Life with Drums, a nonprofit organization that has successfully brought samba to other school and community settings, both in New York and across the country.

Monteiro recently received the 2021 FLAG Award for Teaching Excellence, the city’s largest annual teaching prize that includes a $25,000 prize for each winner, plus a $10,000 prize for arts programs at each winner’s school. Monteiro hopes his school will use the prize money to build out a recording studio.

Was there a moment when you decided to become a teacher?

There wasn’t an exact moment that I can remember, but it was in the 10th grade that I started thinking about becoming a high school music teacher. At the time, I was surrounded by a lot of great music teachers. To me, it seemed like they had a great job and were happy to be at work every day, and music was already really important to me.

How and when did you first get into music?

I started playing music in the seventh grade at Riverside Junior High School in Rhode Island. I joined the school band and learned to play the trumpet, which was my primary instrument through high school and in college at NYU. I played in every concert band, orchestra and marching band that I could. Music gave me the opportunity to travel around the world to play and to teach. I can’t imagine another career.

What is it about samba music that inspired you?

I found samba on a trip to Brazil in 2005. I was struggling as a band teacher at the Frederick Douglass Academy, or FDA. I had huge classes of 50 students. Many of them wanted to play drums, and I was not a drummer. In Rio de Janeiro, I visited a rehearsal of samba school, which is one of the parade groups in the Rio carnival. There were thousands of people there and over 200 drummers playing in the rehearsal. I instantly said to myself, “I am going to try this at FDA.”

Why do you think students have responded particularly well to samba?

One of the reasons that samba works well at our school is that it turned the large class size into an asset. Samba ensembles in Brazil can number over 200 drummers, so 50 students in a class works well. It has a low bar of entry, so every student can feel that they are contributing to the sound of the group. It also has a really high ceiling, so students with more experience and ability can achieve a very high level of playing.

The style of teaching and learning is really important. We are not working from written music. Everything is taught by rote and committed to memory. You have to be present, learning with your classmates as a group to do this well. We’ve created a mini oral tradition in which the group memory holds the information. My advanced students learn as much from playing with each other as they do from me.

What challenges have you faced teaching music during the pandemic?

In a normal year, my class is very participatory, active, and in the moment. Remotely, it had none of those characteristics. It was very difficult working with students through Zoom and through recordings. Mostly, it was difficult for me to be alone and not making music with a group. When I returned to the school building in the fall, I began to make recorded videos of my lessons, playing all the instruments, and editing the audio and video into condensed projects. I spent a lot of time on these lessons and it became a way for me to practice, improve my playing, and provide the students with a more immersive lesson. They could see all of the parts and play along at home. But, the disconnect was difficult. Not knowing if the students were watching the videos, if they were practicing, and not being able to help them improve in real time was extremely hard.

One of the high points of the year was when we were able to resume in person rehearsals in May 2021. We only had five students coming in, but it meant so much to me to be able to play with my students again. It meant that life was coming back, our school was coming back, and that our samba program was coming back. I could see how important it was for the students to have that contact. Playing music is a social activity. We need the socialization part now more than ever.

Do you think music education will look different after the pandemic? If so, how?

I think music education was changing even before the pandemic. It has to open up to include more forms of music and ways of making music, not just the traditional band, choir, and orchestra. We live in such a multicultural and diverse city. The music offered in our schools should reflect that. Our samba program is an example of finding an alternative way of doing school music, but it is not the only example. There are many teachers and programs out there in New York City and beyond that are expanding what we think of as school music. I think the pandemic will accelerate this change. We learned to teach in new ways and through new devices. I look forward to continuing the work I did in creating recorded content and working with video and audio.

You have a busy job, and this is a stressful time. How do you take care of yourself when you’re not at work?

I must admit, I didn’t always do a great job with self-care when the students went remote. It became much harder to draw a line between work time and non-work time. I did enjoy the extra time with my own children over the past year. In the moments when we weren’t struggling through their remote learning, we were able to spend a lot of quality time together. I am definitely looking forward to spending a lot of time at the beach this summer. All of my best ideas come when I am near water.

This article was originally posted on With samba, this Harlem music teacher turned a 50-student class into an asset