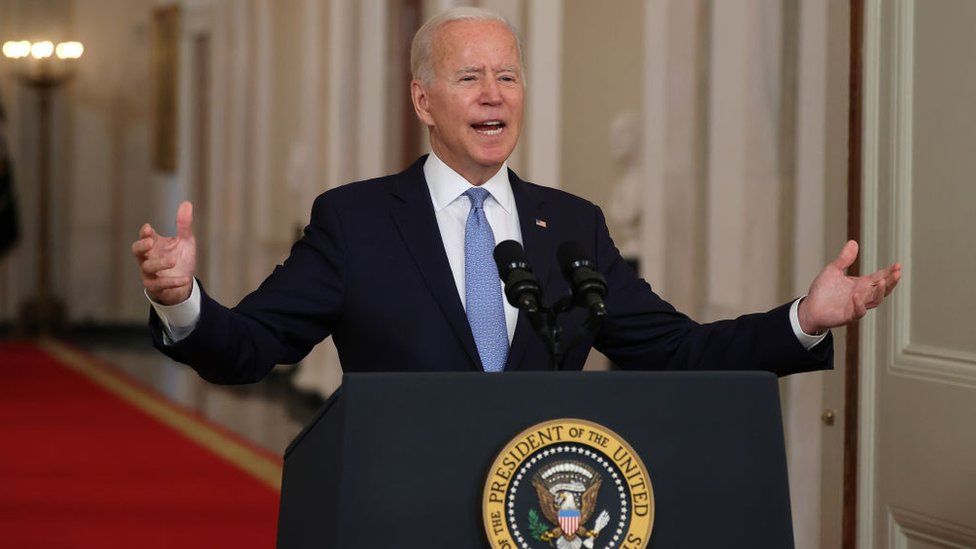 As President Joe Biden flew into Michigan Tuesday to promote his stalled “Build Back Better” legislative agenda, hundreds of counterprotesters greeted him.

“No Biden” a sign on a green tractor said.

Many signs targeted the price of Biden’s roughly $3.5 trillion spending plan that appears stalled as moderate and progressive Democrats disagree over bill content and a final price.

“The infrastructure bill, it’s about rebuilding our roads, our highways, our bridges, our ports, our airports, our broadband. All the things that need repair,” Biden said. “Our arteries of our economy have always been fueled by the economic might and dynamism of Americans.”

Biden claimed the bill would fix America’s crumbling infrastructure, including in Michigan. He said the bill would benefit union workers who would be tasked with installing a national network of over 500,000 electric vehicle (EV) chargers nationwide.

Currently, Michigan is vying as a contender to stay competitive in the future of EVs, but challenges loom. As of Nov. 2020, Michigan ranked 14th-to-last in the nation for the number of EV chargers per 100,000 people. Most Michigan residents don’t drive EVs.

Biden’s visit followed the announcement on Monday Canada invoked a 1977 international treaty to keep the Line 5 hydrocarbon pipelines flowing through the Straits of Mackinac. The Democratic President didn’t mention the controversial pipeline.

The Michigan Republican Party “welcomed” Joe Biden to Michigan with the following statement:

“We’re glad Joe Biden is visiting Michigan so that he can see firsthand just how bad his policies have been for Michiganders,” MIGOP Communications Director Gustavo Portela said in a statement. “From paying higher prices at the pump to paying more for groceries, middle class Michiganders are feeling the burn under Joe Biden and his out of touch crony Gretchen Whitmer. This will change when we elect a new Republican Governor who will stand up for our middle class and help make our state a more affordable place to live for everyone.”

“Michigan can’t afford the kind of political game-playing Democrats have waged with Line 5,” Shirkey said in a statement. “Along with hobbling our manufacturing and business economy, a shutdown of Line 5 would cost thousands of Michiganders their jobs. I hope in his pursuit of improved infrastructure, President Biden will prevail with Gov. Whitmer where the Legislature and reason has not.”