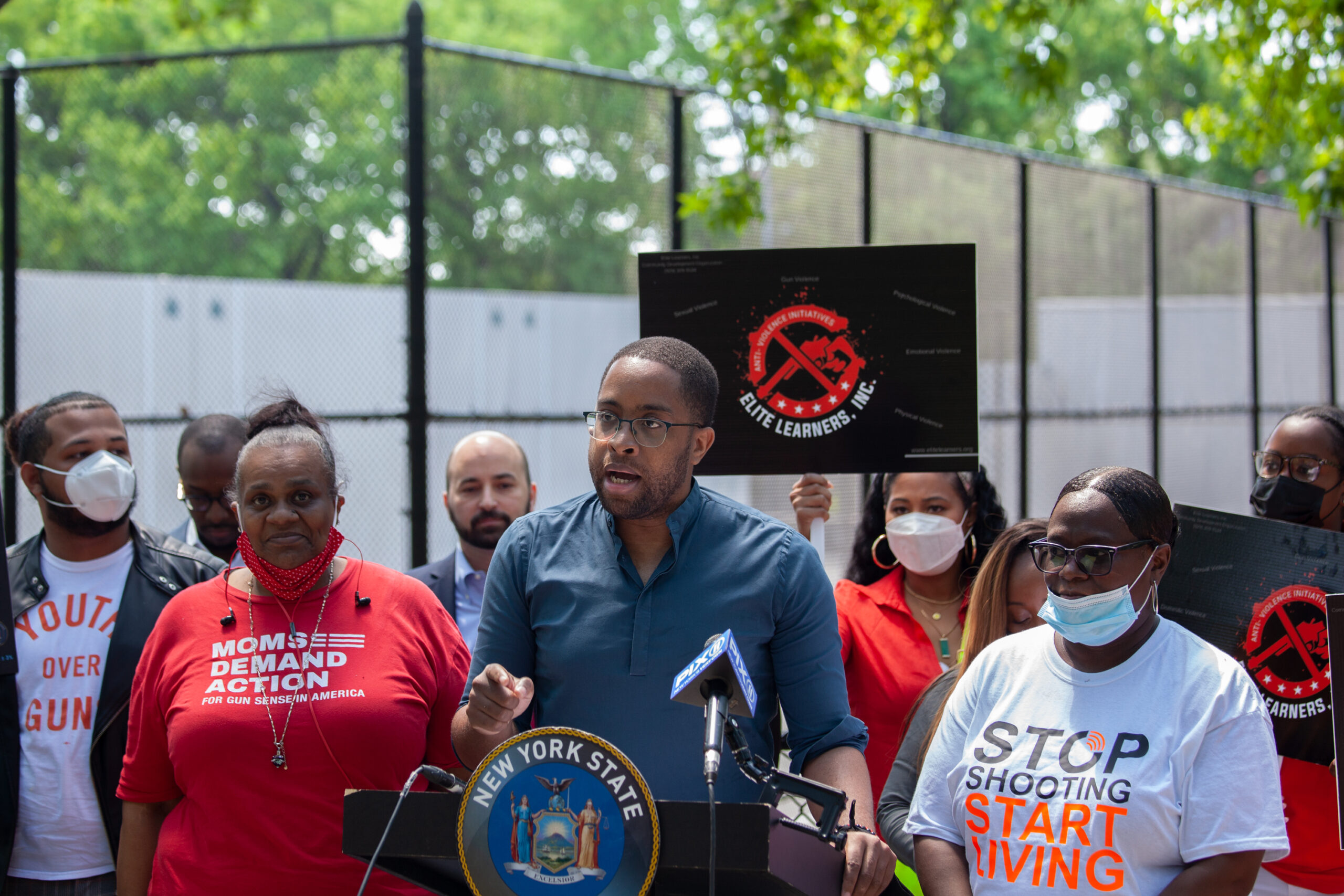 Brooklyn Sen. Zellnor Myrie targets 2005 law that forbids suits against companies on behalf of victims of their firearms, saying New York would be the first state to strike back. The bill comes as shootings are spiking in the city.

As shootings surge in the city, Albany lawmakers are taking aim at the companies that manufacture firearms, readying to make them legally liable for harm caused by the weapons.

A bill’s sponsors say New York would become the first state to explicitly allow lawsuits against gunmakers, countering a federal law that shields the gun industry from civil lawsuits.

“I think that we have found a way, if this becomes law, to really force some accountability on this gun industry,” said state Sen. Zellnor Myrie (D-Brooklyn), who introduced the measure in the Senate.

On Tuesday, the two chambers of the state legislature passed a bill Myrie introduced, along with Assemblymember Patricia Fahy (D-Albany). An earlier version passed the Senate last week.

A 2005 federal law known as the Protection of Lawful Commerce in Arms Act (PLCAA) grants gun dealers and makers almost full immunity from civil lawsuits. President Joe Biden campaigned saying that he’d repeal the law and Democratic sponsors reintroduced a repeal measure this spring, but passage is a longshot in a Senate where the filibuster means bills need at least 60 out of 100 senators to pass.

The law has essentially “shut down all attempts through litigation to hold gun manufacturers liable for the criminal misuse of their weapons,” says Timothy Lytton, a Georgia State University law professor who wrote the book “Suing the Gun Industry,” a comprehensive analysis of lawsuits against gun manufacturers before the 2005 law.

But the law has exceptions allowing civil suits to proceed in rare instances, he noted. One exception says gun industry members could be liable if they knowingly violate a federal or state statute “applicable to the sale or marketing” of guns or ammunition.

With shooting victims spiking in northern Brooklyn up to 141 since the start of the year against the 92 of 2020 and 80 of 2019, Myrie, whose central Brooklyn district has for years been ravaged by gun violence, said his bill would create such a statute.

“The goal is for the industry to be held accountable and change their practices,” he said.

Myrie’s bill declares that any company that manufactures, advertises, sells or imports firearms and “knowingly or recklessly” contributes to a situation that endangers public health or safety is a public nuisance and may be sued by the state attorney general, city corporation counsel or private parties on those grounds.

Myrie told THE CITY that a dismissal of a federal court case in which New York City sued multiple gun manufacturers informed his legislation.

In the City of New York v. Beretta U.S.A. Corp. in the 2nd U.S. Circuit Court of Appeals, Lytton noted, the city claimed that the gun industry was engaging in careless practices and increasing the risk that its firearms would flow into the black market and ultimately be used in crimes in violation of the state’s public nuisance law.

In 2008, a federal appeals court dismissed the city’s suit, ruling that the gun industry should receive immunity under the PLCAA and that the public nuisance law didn’t specifically apply to gun makers.

The public nuisance law “didn’t directly regulate the firearm industry and their practices, and I saw that case and said, ‘Well, why don’t we craft a law that could?’” Myrie said.

Myrie and Fahy say their legislation could give the state a critical tool to fight gun violence.

“We have always led the nation on gun legislation — and we aren’t letting up now to help keep New Yorkers safe from the scourge of gun violence,” Fahy said in a statement.

Asked about the bill Tuesday, Mayor Bill de Blasio said he needed to see its exact language before commenting, but added: “I personally feel that there are real issues in this country with holding gun manufacturers accountable.”

Families of victims of gun violence would be able to sue for damages, Myrie said. Only shooting incidents after the law’s passage could be the basis for a lawsuit, according to a spokesperson for Myrie.

That includes Nadine Sylvester, whose 15-year-old son, Rohan Levy, was fatally shot in 2017 on his way to play basketball with friends, a few blocks from their East Flatbush home.

“The loss of someone, especially from gun violence, is far-reaching,” said Sylvester, who runs the Rohan Levy Foundation, which provides financial support to help young men go to college and major in architecture or engineering, a career Levy had hoped to pursue.

Sylvester said it’s “unfathomable” that the federal law gives a blanket protection to the gun industry. She supports the bill, as well as a person’s right to own a gun.

“I would hope that gun manufacturers do not see this as a penalty, but as a way to really think about responsible gun ownership in our country,” she said.

Bessie Watson-Grant also supports the bill. In 2019, her 11-year-old grandson, Jayden Grant, was shot in Crown Heights, after getting a haircut a day before his sixth-grade graduation. The single bullet left him paralyzed from the waist down.

“My heart always went out to the families and mothers and fathers and grandparents that was affected by this, but never in a million years did I think it would come to my front door,” she said.

“We can’t get back time or go back for Jayden, because he got shot. But if it can prevent another family from going through this trauma, another child from getting injured or worse, killed, oh, my God, I am so for it,” she continued.

Lytton said Myrie’s gun bill could have reverberations across the country.

“It might be that gun manufacturers would be nervous, certainly in sales in New York, about this kind of liability exposure,” Lytton said, noting that before the federal law shielded the industry, many gun makers faced financial uncertainty due to civil suits.

“If we are in litigation and it comes to light that you were being irresponsible in how you were marketing, distributing and selling your guns, the goal is for you to stop doing that and to be responsible, and to implement the appropriate safety protocols and procedures and controls, such that your weapons do not end up on the streets of Brownsville, in Crown Heights, in East Flatbush,” Myrie said.