Please ensure Javascript is enabled for purposes of website accessibility Chicago schools will fully reopen next fall, with mandatory attendance for most - Mid Year Media Review
Skip to content 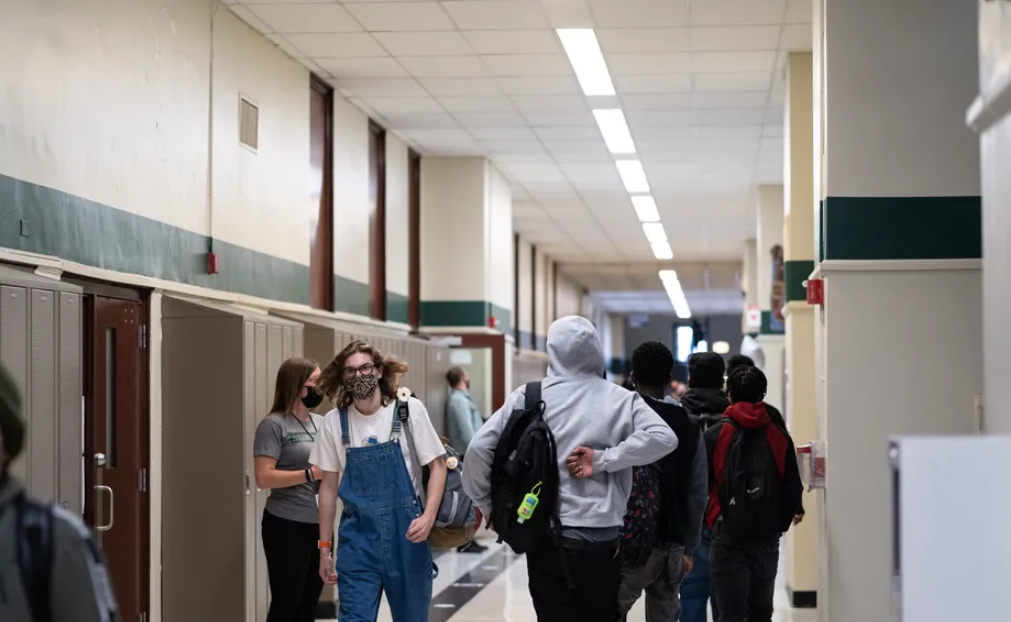 Chicago Public Schools will reopen its buildings for full-time in-person instruction in the fall — and once again to require students to attend, except in limited cases.

Officials shared broad strokes of that plan with the school board Wednesday. They said the district is working on a centralized virtual option available only to medically fragile children. They are also exploring offering some virtual specialized coursework, such as college-credit classes, in a bid to expand access to these district offerings.

“Needless to say, after the past 14 months, we cannot be more thrilled to resume normal scheduling for our students and families,” said Eva Giglio, the deputy chief of staff.

Schools chief Janice Jackson said she and her team were excited that the Illinois State Board of Education signed off on a resolution last week that paves the way for a statewide return to full-time in-person instruction in the fall. Jackson had previously called for bringing back mandatory in-person learning five days a week, with an exception only for students with medical conditions that make them vulnerable to the coronavirus.

Jackson, who will step down as schools chief when her contract ends in June, said Wednesday that a key factor in ensuring a safe and smooth transition in the fall is working to vaccinate as many students and parents as possible. She pointed to regular Saturday vaccination events at a handful of district schools, at which students and family members can get the shot without an appointment through late June.

Efforts to reopen elementary schools this past spring were delayed by contentious negotiations with the city’s teachers union. Chicago Teachers Union President Jesse Sharkey did not directly address the plan to fully reopen campuses Wednesday, except to say he understands the city’s “push to return to normal” but urges caution. He  commended the district’s partnership with the union on prompting the vaccination events, but he stressed the district must significantly step up its vaccination push.

“We can’t paper over the fact that CPS parents and students are not getting vaccinated — at least not at the rates we need,” he said.

“We need a coordinated effort,” he said. “Now is the time for us to name and launch a campaign to get our students vaccinated.”

He claimed the district has been unwilling to set a vaccination goal for the fall as the union has urged.

District officials have said they will remain in discussion with the teachers union about fall plans but do not believe they need to sign a new reopening agreement given the state’s green light for full-time in-person learning. The union has said a new reopening document that lays out the specifics of a joint plan is in order.

A growing number of districts and states are spelling out plans to provide full-time in-person instruction in the fall — and require students to attend, with limited exceptions. In New York City, Mayor Bill de Blasio announced this week that the city will offer no remote learning option in the coming school year and no coronavirus-related accommodations for educators and school staff to work from home. In that district, as in Chicago, about 60% of students continue learning from home this spring.

Other districts have worked to set up centralized virtual learning systems that could well remain a long-term fixture of their educational offerings.

In its bid to bring all its students back to the classroom, Chicago faces anxiety from families, especially those in predominantly Black and Latino communities, who have stuck with virtual instruction this spring even as the district reopened all its campuses and touted low COVID-19 cases in its buildings. That anxiety is especially prevalent among parents of younger students, who might not have the option to get the coronavirus vaccine before school resumes in August.

District leaders promised that in the coming weeks and months, they would survey families about their fall needs and promote vaccination and in-person learning, culminating with an August back-to-school marketing push. Officials, who have faced some challenges in tracking educator vaccinations as some employees sought shots outside the district’s vaccine infrastructure, said at least 55% of school employees have received at least one shot.

When it comes to student and family vaccination, Dr. Kenneth Fox, the district’s chief health officer acknowledged, “There’s a long path ahead of us.” He said the district is working closely with the city and partnering with community groups.

District leaders and the state board of education have already advocated for a full-time return to in-person learning, he noted. “Guess who’s missing from that equation?” he said. “Mr. Sharkey and the CTU.”

“We need you to assure us there is a reopening plan this fall” he said. “Each day that passes is a day of stress.”

Board member Elizabeth Todd-Breland said she knows the district is working  on a wide-ranging plan to address the pandemic’s academic disruption and mental health toll with the billions in federal stimulus dollars the district is receiving. But she said some school leaders and others are eager to see the plan in full after the district has unveiled only some aspects of it, such as an expanded summer learning menu.

Jackson said the district will be presenting its recovery plan in tandem with a broader city plan.

“We do have a plan,” she assured board members. “It’s a comprehensive plan.”

This article was originally posted on Chicago schools will fully reopen next fall, with mandatory attendance for most