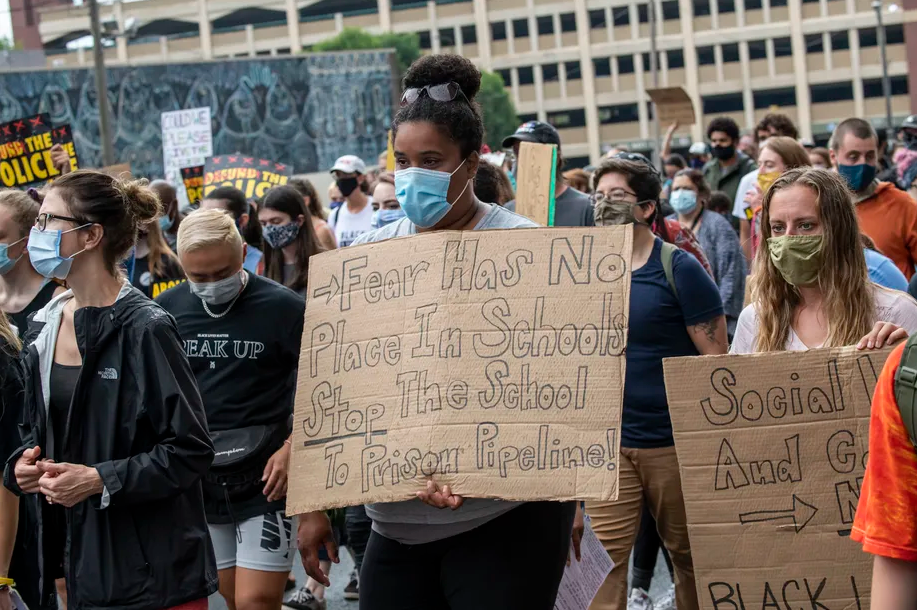 Chicago will limit when school administrators can call police and advise them to first consider factors such as a student’s disability or past trauma.

The revisions to the student code of conduct policy come in the wake of years of lobbying by student activists, a renewed urgency sparked by protests for racial justice, and some high-profile cases at campuses.

Chicago Public Schools’ chief safety officer, Jadine Chou, told the school board on Wednesday that the changes are “just the next step” toward the district’s goal of eliminating the school-to-prison pipeline and cited year-over-year reductions in suspensions and expulsions as evidence of that progress.

But some advocates and activists say the policy still does not go far enough to deter police involvement.

Under the student code of conduct approved Wednesday by Chicago’s Board of Education, school administrators should only dial 911 when there is an immediate threat of danger or harm to those on school grounds. Emergency situations include the use of a weapon or violence on campus that is “unable to be safely de-escalated.”

According to the policy, school leaders must weigh a series of factors before calling police — or enlisting the help of campus-based school resource officers — in nonemergencies. They must consider whether the behavior is related to a student’s disability, age, developmental needs, and trauma history, and whether a person was physically injured as a result of the student’s behavior.

If police are called, administrators will now be required to read students their rights and ensure a parent, guardian, or administrator is present during questioning. A record of each Chicago Police Department call from school grounds must be logged in Aspen, the district’s data system, within 24 hours, the policy says.

Outgoing schools chief Janice Jackson told the board Wednesday that the district listened closely to students when making the changes, in line with previous years.

“We’ve been making tweaks to the student code of conduct based on student feedback for a number of years now, reducing the amount of catch-all clauses … to make our policies more fair,” Jackson said. “Once you make the policy changes, those changes in behavior follow.”

Board members on Wednesday also expressed appreciation for the district’s decision to involve students.

“Thank you for creating a process where students can take the lead,” board member Sendhil Revuluri said. “More clarity and more consistency are a definite improvement.”

But some advocates say district policy, particularly regarding emergency situations, should do more to deter administrators from calling the police and to emphasize the use of alternative safety structures, such as behavioral health teams.

They also argue that the district needs to go further to publicly track call records and make demographic information accessible so officials can catch and flag concerning trends. The public does not have access to district-wide data in Aspen.

“We need to see what’s actually happening,” said Jessica Gingold, a special education staff attorney with the advocacy organization Equip for Equality. “And we need to be able to quickly respond when there is a clear trend.”

Gingold also wants to see more emphasis on de-escalation strategies and alternative safety methods. The code needs to include “a rebuttable presumption that you don’t call the police,” she said, adding that telling administrators they “have the responsibility” to contact police could result in police over-involvement.

In addition, the revised code says both school safety officers and support staff may be involved in de-escalation efforts. Behavior intervention plans for students with disabilities often outline de-escalation strategies that involve social workers, Gingold said, so calling the police or leaning on school security guards can escalate situations.

Changes to the student conduct code over the past several years have resulted in fewer suspensions, expulsions, and police notifications, according to district data. In the 2012-2013 school year, 79.6% of student misconducts resulted in suspension, but that share had dipped to 42.5% by the 2018-2019 school year.

Police notifications have also fallen dramatically over time. During the 2018-2019 school year, schools reported 1,757 police notifications, down from 2,354 the school year prior and more than 5,000 annually at the start of the decade, according to district data. The data is not broken down by race and does not make clear how many notifications led to arrests.

The district’s new code of conduct changes would impact more than 500 district-run schools, including elementary campuses. CPS spokesperson James Gherardi said district administrators, discipline leaders, and other staff members responsible for implementing the policy changes will be trained in the summer and fall, with ongoing training and development throughout the school year.

Security officers are receiving instruction in skills for de-escalation and relationship building, he added.

If an administrator doesn’t follow the steps laid out in the code of conduct, the district will review the case and follow the district’s discipline policy if needed, Gherardi said. “We also make recommendations for additional training and support for the administrator.”

In addition to establishing a distinction between emergency and nonemergency situations, the guidelines remove criminalizing language (words such as “assault” and “battery”) from the code of conduct.

“These revisions are to support district-wide efforts to eliminate the association between children’s behaviors and language from the criminal justice system, which has been cited as one component of the ‘School-to-Prison-Pipeline,’” the policy said.

Jasmine Roach, a rising senior at Prosser Career Academy and leader with advocacy group VOYCE, said provisions for mental health support remain notably absent from the student code of conduct. The ideal police notification system is one that doesn’t involve police, Jasmine said, adding that instead of officers, student safety programs should center the work of Black and brown mental health organizers.

She doesn’t expect the shifts to the student code of conduct to change much about the presence of police on campus. The new policy doesn’t guarantee administrators won’t call police; they just have to take an extra step, Jasmine said.

“[The revisions] didn’t change anything,” she said. “They just reworded it.”

This article was originally posted on Chicago will limit when schools call police. Do changes go far enough?