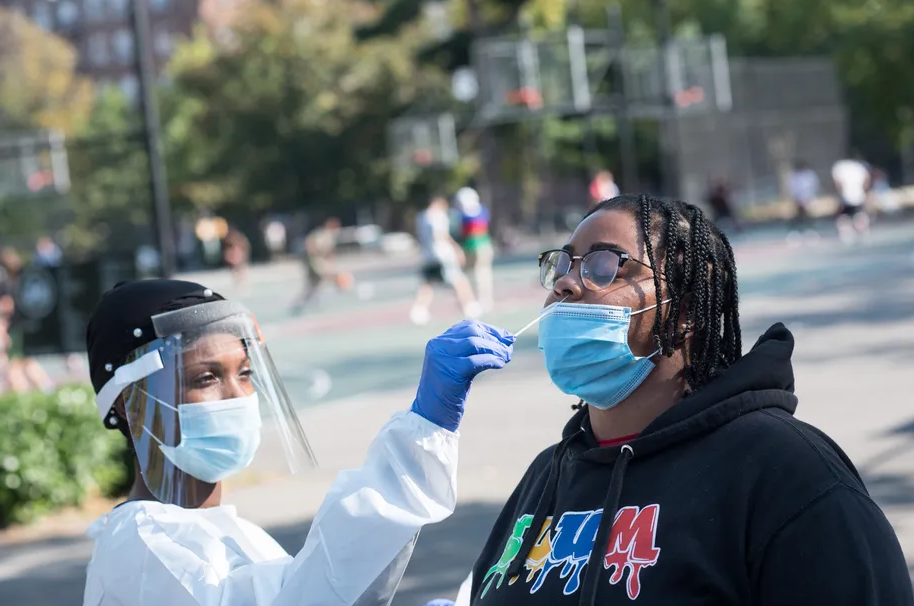 At Carlyle Community School District 1, a downstate district on probation for violating the Illinois mask mandate, 40 people have tested positive for COVID-19 and more than 200 students are set to be quarantined, state health officials said Thursday.

Dr. Ngozi Ezike, director of the Illinois Department of Public Health, pointed to the surge of coronavirus cases at newly reopened campuses, including Carlyle in Southern Illinois, to defend a weeks-old universal school mask mandate and a new decision to require teacher vaccinations.

By contrast, Algonquin’s Community Unit School District 300, a much larger district that is following the state’s mask mandate, is currently reporting that 48 students have tested positive for COVID-19 and two have been hospitalized. Carlyle, which has moved back to universal masking, has a little less than 1,000 students, while Algonquin, in the West suburbs of Chicago, has an enrollment of about 20,000.

“If we actually want our kids to be in school for in-person learning, masking is a great protection and our best bet,” Ezike said Thursday. “The bottom line is that masks are as effective as vaccines are.”

The state public health department is currently tracking the number of school outbreaks and potential exposures. As of Aug. 20, the public health department is reporting five  school outbreaks — two of which were connected to sports, according to the state health department. On that list is Brown County High School, in the western central part of the state, where the school district was on probation until Tuesday for not complying with the Illinois mask order, according to state school board records. The district has since reversed course.

Other outbreaks have been reported at Colona Grade School, ROWVA High School, and United Township High School, all in counties near the Iowa border; and Reavis High School in suburban Burbank. An outbreak is defined as five or more cases that be traced back to exposure on school grounds; more broadly, there have been 307 exposures at campuses across the state within the last 30 days. The vast majority involve fewer than five cases.

A rise in cases amid a return to school and under threat from a highly contagious delta variant could present new complications for school districts in Illinois and across the country that have moved to limit when schools can offer remote learning.

In an effort to strongly encourage full-time reopening this fall, Illinois school superintendent Carmen Ayala issued a July order specifying that only students who had not been vaccinated and who were under quarantine orders could be given the option of remote learning.

But that could limit what options districts have amid outbreaks, as some other areas of the country have experienced. Under a separate part of the school code, written pre-pandemic, local school boards can only adopt remote education policies for individual students — not classrooms, campuses, or districts. Asked recently if school districts can create broader remote learning options as they did last year, a spokeswoman for the state school board said “no.”

Under pressure from Chicago’s teachers union, Chicago Public Schools’ interim CEO José Torres told the school board Wednesday that he made a commitment to union President Jesse Sharkey that he would personally approach Gov. J.B. Pritzker to advocate for an emergency declaration allowing broader remote learning should community transmission reach dangerous levels.

In Kentucky, where school has already been open for weeks in many districts, several superintendents were forced to cancel school due to staffing shortages and large numbers of students out on quarantine. There, a new state law intended to encourage in-person instruction has had the unintended consequence of limiting how many days school districts can run remote programs, so some districts aren’t offering virtual instruction during the closures. Instead, students have take-home packets.

Virus outbreaks also have forced closure of multiple districts in Texas. The Associated Press reports that the shuttered districts all had mask-optional policies, in line with the Texas governor’s executive order banning local entities from issuing mask mandates. In at least one of the districts, in Odessa, Texas, officials said they could not immediately provide a virtual learning option, but teachers would be available via email.