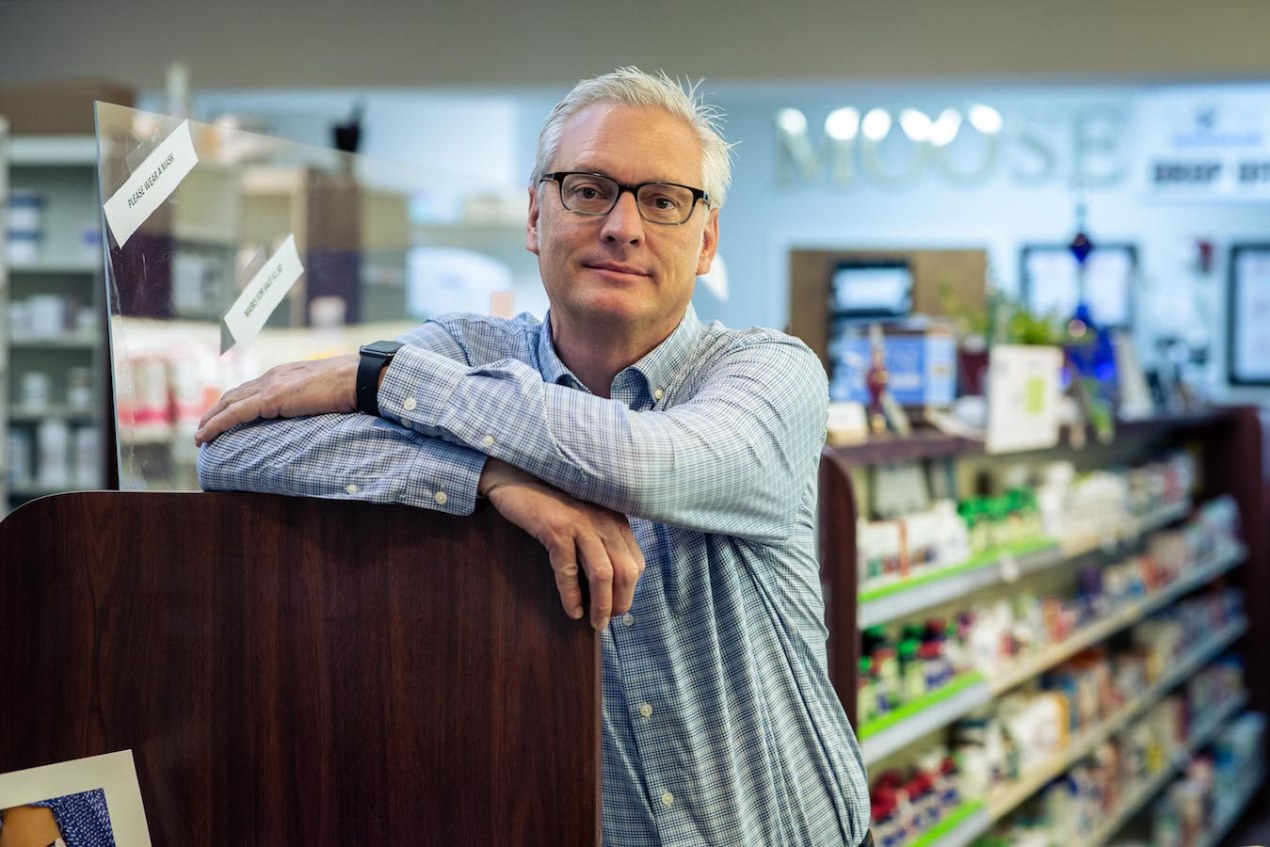 Tobin’s pharmacy and department store had already stocked its shelves with Easter and Mother’s Day items last spring, and the staff had just placed the Christmas orders. The shop in Oconomowoc, Wisconsin, had been operating on a razor’s edge as retail sales moved online and mail-order pharmacies siphoned off its patients. It was losing money on 1 out of 4 pill bottles filled, so the front of the store, where it sold clothing, cosmetics and jewelry, had been compensating for pharmacy losses for years.

“And then covid hit,” said Dave Schultz, who co-owned the store with his brother. “And that was the final straw.”

The covid-19 pandemic sank many businesses in 2020, particularly those relying on in-person sales to stay afloat. For pharmacies — especially independent pharmacies — the pandemic lockdowns exacerbated long-standing economic pressures. Many small owner-operated pharmacies adapted quickly, delivering their traditional amenities in safer ways or capitalizing on new services created by the pandemic, such as covid testing and vaccinations. But others, like Tobin’s, became casualties of the pandemic, closing their doors for good.

It’s too early to quantify just how many pharmacies succumbed to covid and assess how patients will be affected. The total number of pharmacies has declined less than 1% over the past five years, as pharmacy chains get larger while independent community pharmacies — often the last place left to fill a prescription in some small towns — go under. The Rural Policy Research Institute found that 1,231 independently owned rural pharmacies, about 16%, closed for good from 2003 to 2018, well before the pandemic pinch. And according to the Drug Channels Institute, after five years of declines, the number of urban and rural independent pharmacies dipped below 20,000 for the first time in 2020.

Revenue from covid testing and vaccinations may help keep some independents afloat, but that comes with added costs and logistical challenges.

“Pharmacies are struggling,” said Harry Lattanzio, president of PRS Pharmacy Services, a consulting firm in Latrobe, Pennsylvania. “We’re getting calls from a lot more pharmacy owners that want to sell their stores. They’ve had enough.”

Most pharmacies, he said, saw a decline in prescriptions last year as customers hesitated to visit their doctors for anything but emergencies. That drop in business also meant fewer sales of over-the-counter medicines and ancillary items sold by the stores. Meanwhile, pharmacies had to buy protective equipment to keep staffers and customers safe and beef up their technology to address the new reality.

Lattanzio said some independent pharmacies, which had always preferred the personal touch of having staff members answer the phones, have had to invest in new systems to handle thousands of calls a day from people seeking vaccines. Costs rose even as revenues dropped.

“For the most part, they lost money,” Lattanzio said. “If you didn’t lose money, you did something really right.”

When Lattanzio opened his first pharmacy 20 years ago, he saw gross profit margins of 36%. Now independent pharmacies are fortunate to see margins of 3% to 5%, if they survive the pandemic at all. Much of that decline comes from the impact of pharmacy benefit managers, which manage commercial and public health plans’ prescription drug reimbursements to pharmacies. Those PBMs, often aligned with large drugstore chains, systematically squeezed the profits out of independent pharmacies. That left many smaller chains or unaffiliated pharmacies unable to bear the added hit from the pandemic.

“I’m afraid to see the outcome,” said Joe Moose, co-owner of Moose Pharmacy, a chain of seven drugstores on the outskirts of Charlotte, North Carolina. “The delay in payments, the increased cost to keep operating in the early days of this, combined with the fact that reimbursement is so poor already — covid may be the final nail in the coffin for some of us.”

Moose Pharmacy is trying to adapt. When it had to stop in-store purchases during the pandemic, the chain expanded curbside services and hired additional drivers. Home deliveries tripled. Workers ferried food, toilet paper, paper towels and shampoo to customers.

“We had to build out our website. We put in technology so that people could text us from the parking lot. It had to be HIPAA-compliant,” said Moose, who owns the chain with his brother. “And keep in mind that all of that is happening at no change in reimbursement.”

Covid also interrupted the medication supply chain. In normal times, the pharmacy’s supply of drugs is automated, so when it dispenses medicines, replacements show up in the next day’s delivery. But Moose and his staff had to resort to the old way of calling up five or six wholesalers to see who had the drugs in stock.

When covid testing was scarce, the pharmacies taught their employees to perform rapid tests. Once vaccines arrived, Moose sought out patients who couldn’t make an appointment on a smartphone, who couldn’t drive to mass vaccination clinics, or who were just afraid to leave their home.

Staffers delivered vaccines to one elderly man with cancer, whose wife had died a year earlier. He and his disabled adult son didn’t want to risk going out and contracting the virus.

“But he trusts us, and so we deliver medication to him probably every other week,” Moose said. “So it made sense that we bring the vaccine to him.”

Tripp Logan, a pharmacist in Charleston, Missouri, said one of his three pharmacies is in rural Mississippi County, which has no hospital or chain pharmacy for the 14,000 residents. There, four independent pharmacies and the county health department formed a consortium to help distribute covid vaccines.

“It started with a group text, and the next thing you know, we’re vaccinating hundreds of people a week collectively,” Logan said.

Because pharmacies can make up to $70 per covid test and $40 for each vaccination,  many pharmacies are earning new revenue to offset some of the retail losses, said Owen BonDurant, president of Independent Rx Consulting in Centerville, Ohio.

“So that has brought a significant increase in profit margins for the short term,” BonDurant said. “Covid has probably saved a lot of pharmacies. Because PBM pressure has been so hard, especially on some of these rural and inner-city pharmacies, a lot of them still are on the verge of going out of business.”

The cash infusion from the federal Paycheck Protection Program also kept many pharmacies afloat, and allowed some to make investments that better position them for the future.

“We would have had to shut down or sell because the PBMs were brutal last year, and they killed off a lot of our friends in Wisconsin,” said Dan Strause, president and chief executive officer of Hometown Pharmacy in Madison, Wisconsin. “Without the PPP, there would have been far more facing the same fate.”

Some of the changes born of necessity could stick. In a recent survey by the National Community Pharmacists Association, 3 in 5 community pharmacists said they expect more pharmacies to offer point-of-care testing after the pandemic, and more than half said additional pharmacies will give immunizations.

Hashim Zaibak, CEO of Hayat Pharmacy in Milwaukee, said his pharmacy is considering testing for the flu, strep and hemoglobin A1C levels for those with diabetes, and it will continue providing vaccinations.

“Those changes are here to stay,” Zaibak said.

Tobin’s owners considered selling their pharmacy, but finding no buyers, they shut down for good in September. Schultz said it’s unclear whether they could have survived had covid not happened — or if the vaccine revenue might have helped. He knows of two other independent pharmacies in Wisconsin that closed in the past 18 months.

“The real crux of the matter is you’re getting paid, in some cases, $60 under the cost that we end up paying for the medication,” he said. “How do you justify that portion of your business?”

Oconomowoc has one independent drugstore, two grocery store pharmacies and a Walgreens to serve its 17,000 residents. But Schultz worries about many of the older, sicker customers who relied on the personalized care his pharmacy provided. One of his former pharmacists now works at a drugstore outside of town but delivers medications to some of Tobin’s most vulnerable former customers on her way home.

“She just didn’t think they would survive going someplace else,” he said.