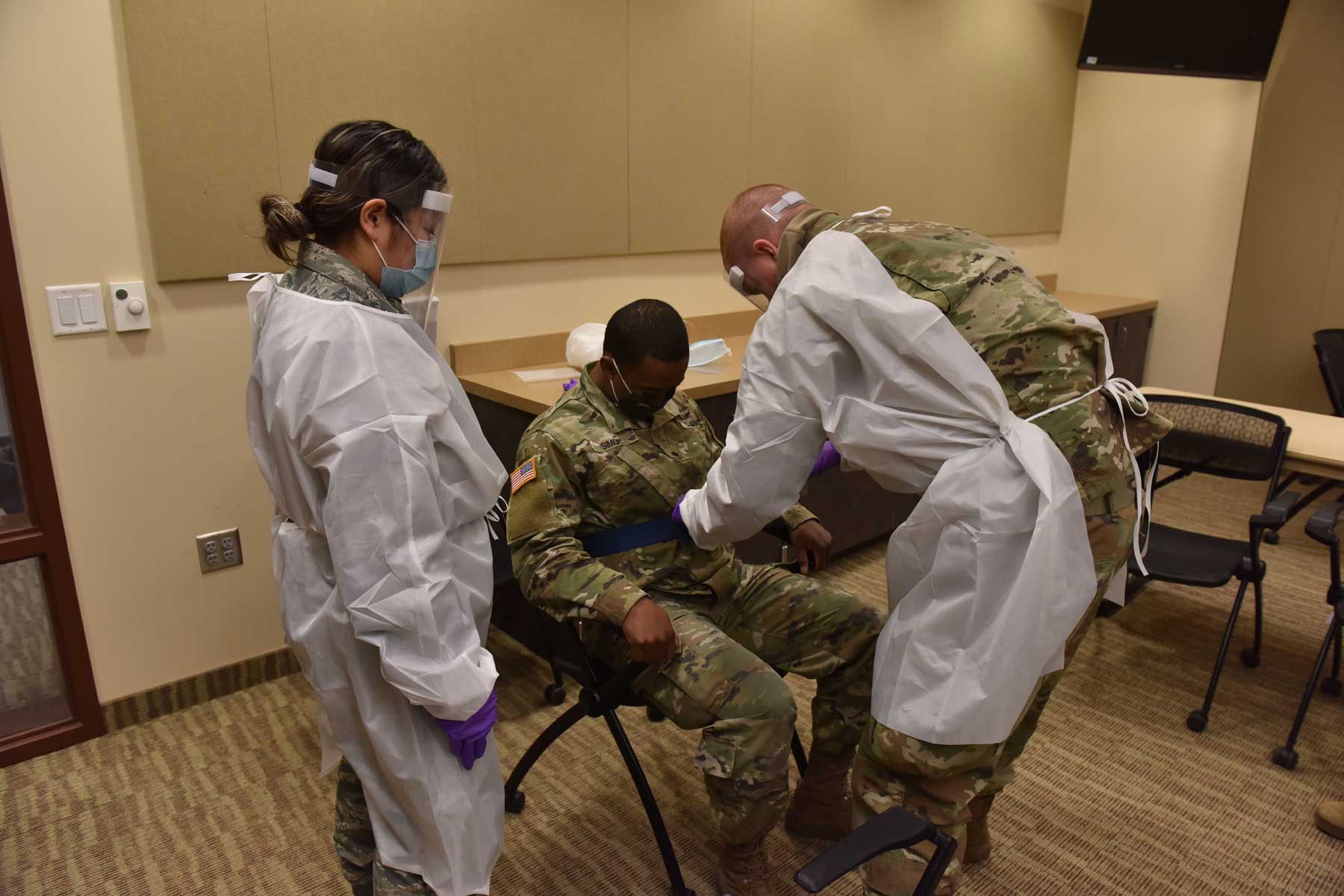 California is about eight weeks into a mass vaccination campaign to combat the COVID-19 pandemic, administering tens of thousands of shots a day.

The California Department of Public Health on its vaccine tracker reported Thursday that providers have administered 3,984,752 out of about 6.44 million doses that have been distributed to hospital systems and local health offices, a record-high daily increase of 191,955 doses given. The state added about 143,000 shots from Tuesday to Wednesday.

The state public health numbers don’t distinguish between first and second doses. According to U.S. Centers for Disease Control and Prevention data updated Wednesday, about 83% of California’s shots given have been first doses: a little over 3 million.

The CDC on its tracking dashboard reported thatCalifornia through Tuesday had administered 9,292 doses for every 100,000 residents, which ranked 16th lowest among the 50 states and Washington, D.C. The total reported by CDPH works out to 9,930 per 100,000.

Gov. Gavin Newsom during a Wednesday news conference said the state is receiving 1,060,000 doses of vaccine this week, and that providers across the state are now averaging about 1 million doses administered per week.

Hospital systems and public health clinics have been expanding access. Sacramento County in a Monday update to its vaccination schedule says it has formally entered Phase 1B of the rollout, giving shots to some people ages 65 and older as well as to law enforcement and emergency services workers while also continuing to vaccinate health workers in Phase 1A.

Sutter Health has begun vaccinating patients 65 and older, joining UC Davis Medical Center and Mercy Medical Group which have opened to that group in the past week.

Patients in the Sutter Health network can book online or by phone, but appointment slots remain very limited and there are long phone wait times due to very high demand.

The county’s other major health provider, Kaiser Permanente, continues to offer appointments only for those 75 and older along with 1A health workers.

Here is the latest on vaccine distribution in the Sacramento area:

HOW MANY DOSES HAVE BEEN GIVEN ACROSS SACRAMENTO AREA?

These are the totals for combined first and second doses, administered through Wednesday, as reported by the state public health department, by recipient county of residence.

It is unknown how many residents of each county have been fully vaccinated, because neither CDPH nor individual counties in the Sacramento area have given comprehensive figures for first doses vs. second doses.

Placer County continues to fare by far the best in the immediate capital region in terms of doses per 100,000 residents, while Sacramento County remains about 15% below the statewide average, according to state data.

Local health departments in the capital region are receiving several thousand doses of Pfizer and Moderna vaccines on a weekly basis, according to each county.

Most county health offices are splitting their direct allocations between their own county-run clinics, non-chain hospitals and other partners, including some Safeway pharmacies.

Counties in which multi-county hospital systems, such as Kaiser Permanente or Sutter Health, have little or no presence may be receiving larger direct allocations relative to their populations, which are then distributed to hospital systems that only operate in a single county.

▪ Phase: 1A (front-line health workers; long-term care residents) and early stages of 1B (adults 65 and older; essential workers in some sectors)

The county has started offering vaccine appointments for those 65-and-older via clinics at the Sacramento State campus and at California Northstate University in Elk Grove, but all appointments at those sites this week have been fully booked with no dates announced yet for the next round.

The county has also shared a list of partnering Safeway pharmacies that are offering clinics. Those are open for both health workers in Phase 1A and county residents at least 65 years old.

County residents ages 65 and older can fill out “vaccine interest” registrations online to be notified regarding availability, but county officials warn that the wait for many residents could be more than a month — perhaps multiple months — due to very limited supply.

Both the Sacramento State and Northstate sites are walk-thru clinics rather than drive-thru, and both offer only the Pfizer vaccine, which means a three-week wait for the second dose.

Phase: 1A and first tier of 1B

▪ Administered: 17,500 shots (88% of received) as of Wednesday, according to county spokeswoman Carla Hass.

El Dorado County officials in a recent FAQ said all appointments through its public health office clinics and Safeway pharmacy partners have been booked through mid-February.

“After that point, we plan to hold some 65+ only and 75+ only drive-thru clinics as we receive shipments from the State,” the county wrote.

▪ Received: Not reported since early January.

▪ Administered: “Nearly 10,000” total doses by county-run clinics and “about 2,500” through partnerships with Safeway pharmacies, Health and Human Services official Michael Romero estimated during a Board of Supervisors on Jan. 26.

Yolo this week planned to hold clinics specifically for residents ages 75 and older without insurance, but opened those clinics up to all county residents ages 65 or older, regardless of insurance status, after low turnout to Tuesday’s clinic.

The remaining clinics through Saturday in Esparto, Knights Landing, Woodland and West Sacramento quickly filled up after that announcement was made Tuesday evening. A clinic from 1 p.m. to 4 p.m. Thursday at the Knights Landing Branch Library was made available for walk-ins, but only for those who reside in Knights Landing.

All of those are appointment-only. Details on those clinics and Yolo’s other county-run clinics, including exact times and how to schedule an appointment, will be made available at yolocounty.org.

Hospital systems operating in multiple counties receive their own allocations from the state.

Most of the earliest of these shots went to health workers, but priority is being expanded to patients in the 65-plus and 75-plus age groups.

Sutter Health has opened its appointments to those 65 or older. Patients of the health system who meet the age criteria can find booking information through Sutter’s My Health Online portal.

Sutter this week has also opened centers in Sacramento and Roseville. Officials are not disclosing exact locations for these sites to the general public, because they don’t want people to show up without appointments.

UC Davis Health officials recently told The Bee the system has vaccinated more than 22,000 people so far, including more than 11,000 employees and students plus more than 10,000 patients.

It started vaccinations for adults ages 75 and older in mid-January and according to its website is now vaccinating patients 65 and older.

UC Davis Health is averaging 1,000 shots a day at its main hospital in Sacramento and will open a second site this week. Both are appointment-only.

Dignity Health in an update Friday said vaccines are “now available for patients who have a Mercy Medical Group primary care physician and who are 65 and older.”

Mercy Medical Group said that as of last Friday it had administered “over 1,800 vaccines so far” to patients in the Sacramento area during pilot clinics that began the week of Jan. 11. Mercy says it will give about 2,400 this week and plans to increase capacity to handle “3,000+ shots weekly.”

The provider says it will be proactively contacting patients who meet the eligibility criteria.

Kaiser Permanente continues to focus initial inoculations on those ages 75 and older, according to its patient website.

“As more supplies become available to meet this need, we’ll send you a letter or email with instructions for scheduling your appointment,” Kaiser Permanente says on its website. “You don’t need to contact us. We’re starting with adults 75 and older.”