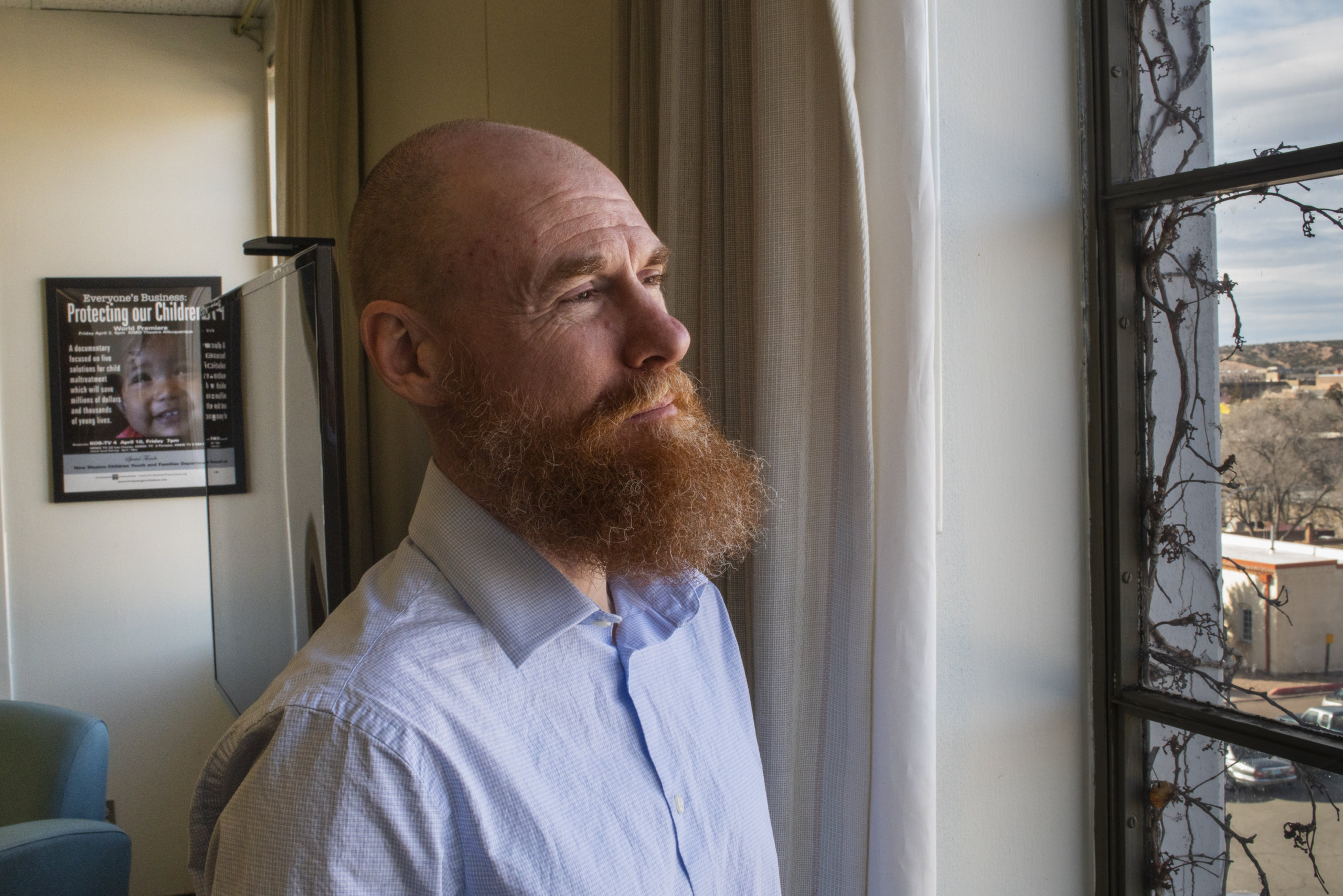 In late 2019, Jackson Williams, manager of a data unit at the New Mexico Children, Youth and Families Department, raised his hand at a work meeting to ask about a massive computer system upgrade at the agency — one that could potentially cost $45 million over the next decade. Led by Cabinet Secretary Brian Blalock, a San Francisco Bay Area transplant, the CYFD had selected a young California firm named Binti to lead the overhaul, apparently without considering any of the more than 20 other companies that expressed interest in the job. “Who is Binti, and why are they in charge of this project?” Williams asked.

Within days, Williams said he was taken off the modernization project. Soon after, Williams received a letter of reprimand from his supervisor asserting that he had violated the CYFD code of conduct by “going outside the chain of command” when he voiced his concerns about Binti. Williams later resigned from the department.

He would not be the last.

According to interviews, at least half a dozen high-level employees have been reprimanded, resigned or were fired after they raised questions about Binti Inc., the Oakland, California-based tech company now tasked with overhauling the computer system.

“I felt like I was doing the right thing by raising these issues, and instead I was let go,” said one of the departed workers who, like others interviewed for this story, asked not to be named for fear of further retaliation.

Some of the employees expressed concerns that Binti had not undergone a proper analysis or review. Others worried whether a company that was little more than a year old when it won the contract could be trusted to modernize one of the state’s most critical and complex systems. Still other staffers questioned why Binti was selected without a competitive bidding process.

Taken together, their departures represent a loss of decades of experience and expertise at the agency tasked with ensuring the well-being of New Mexico’s children.

“Binti is the sacred cow at CYFD — you just can’t touch it,” said Williams, who has more than 20 years of computer engineering experience both in government and the private sector. “Any questions about it are met with very quick retaliation.”

CYFD officials vigorously deny that any retaliation has occurred.

“CYFD has not disciplined or terminated any employee for raising concerns, asking questions, or making complaints about the [modernization] project nor the Binti procurement,” CYFD spokesman Charlie Moore-Pabst wrote in a July 21 email.

The stakes are enormous: The CYFD’s decades-old computer system, an outdated program called FACTS, tracks everything related to the thousands of children in the department’s care, from adoption to juvenile detention to cases of abuse in foster homes. Binti, which has been paid $446,000 to date according to state records, will have to develop a brand-new program that can take over and improve all of those functions.

Launched in 2017, Binti has landed contracts with 160 state and local governments, primarily for software that facilitates foster placement and adoption. Binti’s software has won recognition for making the foster-care process more user-friendly and efficient.

But the company has never before undertaken the kind of complex, comprehensive system it’s been tasked with building for the CYFD.

“New Mexico would be the first state” that is using Binti for its full child welfare information system, said Binti CEO Felicia Curcuru. “It’s very exciting for us,” she said, adding that the company is fully equipped to meet the demands of the project. The company is offering a low-risk way to build the software, she said: “The state does not need to pay us if we don’t deliver.”

Binti was disqualified from competitive bids in several other states, including Maine and Louisiana, owing to its low scores.

“This isn’t just some abstract, inconsequential computer program,” said Katherine Ortega Courtney, a former CYFD bureau chief who now is a data expert at a child welfare institute in New Mexico. “Each one of those data points is an actual child’s life.” If the system fails, the state won’t know where the kids are or what’s happening to them.

The federal government, which the CYFD hopes will fund the vast majority of the upgrade expense, has specific rules laying out the acceptable process for contracting with a software vendor. With few exceptions, states must go through a competitive bidding process and a thorough analysis of the project’s needs, scope and costs.

Circumventing those procedures not only risks saddling the state with a subpar software system but could also leave New Mexico taxpayers on the hook for the full price tag.

The federal government has flagged a number of noncompliance issues with the Binti contract, including the CYFD’s claim that Binti was a “sole source” provider — a term used when only one company is capable of delivering on the contract.

Prior to Blalock’s arrival in 2019, the CYFD began the contracting process by issuing a formal request for information — the first step in a competitive process, in which companies present their capabilities and offer demonstrations of their product. Respondents included several big-name companies, such as Deloitte and IBM.

“They asked us to submit a plan, and then they wouldn’t even answer our emails,” said the CEO of one of the companies that submitted a proposal.

“They didn’t want to hear from anyone but Binti,” said the CEO, who asked not to be identified. “I’ve never seen anything like it before.”

Meanwhile, CYFD staff and leadership were communicating with Binti on a regular basis, documents show. Once he arrived at the CYFD, Secretary Blalock began working to draft agreements together with Curcuru on Google Docs.

The controversies around the Binti contract — and the consequences for questioning it — are representative of a larger “don’t-rock-the-boat” culture that has taken hold since Blalock took the helm, according to interviews with employees. Staffers who ask questions say they are seen as insubordinate, and can be disciplined as a result.

“In the past few years the state has lost numerous veteran staff because of the CYFD administration’s culture of intimidation and harassment,” said another employee who recently resigned after more than a decade in the department.

“I personally know several people, including myself, who have been written up for raising ethical concerns about things going on within CYFD. Morale is extremely low.”

The Gilmores, who were hired in late 2020 to fill high-level positions, had both repeatedly questioned the Binti contract, according to CYFD emails. The lawsuit asserts that Cliff Gilmore was removed from the team after questioning the procurement process. The suit further claims that Debra Gilmore received a letter of reprimand from Deputy Secretary Terry Locke soon after she raised concerns about the state selecting “a California-based start-up that did not appear to have a full [plan for replacing the old FACTS system] nor significant experience in the child welfare space.”

Both Cliff and Debra Gilmore had also raised alarms about the department’s policy of using an encrypted messaging app called Signal for official state business. As revealed in a May Searchlight investigation, the CYFD was setting the app to automatically delete its Signal messages on a rolling basis, a likely violation of public records laws. The department stopped using Signal in April but is still auto-deleting messages on another platform called Microsoft Teams.

On June 28, the Gilmores, along with Jill and Douglas Michel — two longtime foster parents in Albuquerque — jointly filed a formal complaint with the inspector general of the federal Health and Human Services Department, as well as the New Mexico attorney general, auditor and ethics commission, alleging that Blalock and Locke violated state and federal laws by awarding Binti a sole-source contract and giving it unfair advantages. The CYFD denies all the allegations.

“We fully intend to vigorously defend the baseless allegations raised in the litigation, other forums and through the media,” spokesman Moore-Pabst stated. “Hints and innuendos are not facts or evidence,” he continued. “The project continues to be managed appropriately.”

Nevertheless, emails obtained through a public records request show the chief CYFD procurement officer — who is charged with overseeing contracts and making sure the process complies with state law — repeatedly took issue with the Binti contract, writing that the CYFD had not used a “valid procurement method.”

In an email to agency staffers, that employee, Lucy Vigil Rendon, said that Blalock issued an “executive directive” instructing employees to make Binti the sole company responsible for the software system overhaul.

Vigil Rendon also protested the Binti contract in additional emails. The agency, she wrote, had failed “to provide safeguards for maintaining a procurement system of quality and integrity.”

This article was originally posted on CYFD employees say they were reprimanded, fired for asking questions about major software contract