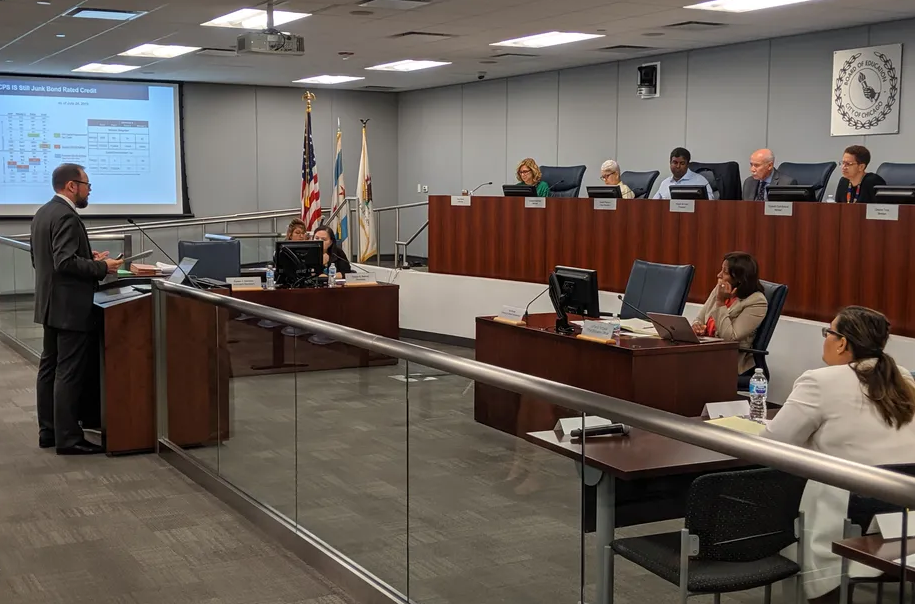 Illinois Gov. J.B. Pritzker quietly signed the compromise bill on Thursday evening. In 2024, 11 of the seats would be appointed by the mayor and 10 would be elected, but the city would host a full slate of elections two years later, in 2026.

The shift is the latest example of the political tide turning against a brand of education reform that remade some of America’s urban school systems over the last three decades.

The bill landed on the governor’s desk with many crucial details unresolved. Legislators have said they will use a veto session this fall to hammer out such points as how to untangle city and school district finances and divide the city into electoral districts, and what campaign finance rules, if any, should be established to guard against special interests flooding elections and driving up the cost of participation.

Legislators who sponsored the measure have said they will try to set rules that would limit that influence, though how is unclear.

The bill, which was long championed by the city’s teachers union but criticized by Mayor Lori Lightfoot for being “deeply flawed,” includes a moratorium on school consolidations and closings until at least 2025. That could limit options for Chicago’s next schools CEO, who will oversee a public school district that is annually losing enrollment.

The 21-person board would be significantly larger than any other school governing body in other major cities. Among the 10 largest school districts, the largest school board is New York City’s 15-person board, which is appointed by the mayor and other officials.

Pritzker, a Democrat, said the bill reflected “compromise and thoughtful deliberation” among legislators, and he promised to work with the General Assembly and the mayor’s office to create a plan to address the lingering questions.

“An elected school board will help students and their families have a strong voice in important decisions about the education system in Chicago,” the governor said in a statement.

The bill establishes the city’s first school board elections in November 2024 in which 10 members will be elected to serve four-year terms. The mayor will appoint the remaining 11 members to serve two-year terms. In 2026, Chicago residents will be able to vote for all 21 of the members.

In addition to the moratorium on school closures, the bill includes language to prevent individuals with conflicts of interest from serving on the board and establishes a Diversity Advisory Board to be appointed by the mayor to help guide the elected school board on education issues.

The law goes into effect in June of next year, a phase-in period that legislators have said will give them time to work out logistics. One closely watched aspect of that process will be campaign finance rules. Across several legislative sessions where similar bills were introduced and scuttled, one of the prevailing criticisms of the elected school board push was the high cost of elections in cities such as Los Angeles and concern that special interests would flood the elections, creating a partisan board.

The signing marks the end of an era for Chicago, where the school board has historically been appointed since 1872. Since 1995, it has been the job of the mayor to appoint the members.

Mayoral control of schools, and the appointed school boards that came along with that model, were pushed by their advocates as a way to allow a schools chief to make decisions that were unpopular but necessary to remake struggling school systems.

In Chicago and other places like New York, that made it possible for cities to close hundreds of schools and allow charter schools to grow rapidly — choices that might have been politically impossible with an elected board.

Notably in Chicago, former Mayor Rahm Emanuel championed closing nearly 50 schools that disproportionately affected Black students from low-income families — at the time it was the largest school closure in recent U.S. history. He had argued the closures were necessary to improve academics and save the district money, and his appointed school board voted unanimously to do so.

The closures led to an outcry from Black and Latino parents and education advocates, and research later showed it caused big academic, social, and emotional disruptions for students without much financial benefit. And it left many communities of color with giant empty buildings the city did little to help repurpose. When other cities with elected school boards, like Kansas City, were faced with similar decisions, some school board members said they felt more pressure to listen to what communities wanted to do.

The Chicago Teachers Union, which had long championed the bill and contributed to the campaigns of the sponsoring legislators, cheered the passage of the legislation in a statement and said it capped a “decades-long fight.”

“Chicago will finally have an elected board accountable to the people our schools serve, as it should be,” the union said in a statement.

But some longtime community organizers argue that the new law still leaves decision-making in  mayoral hands for too long. Among them is Lugenia Burns Hope Center community organizer Rod Wilson. He’s pushing for a fully elected school board — now.

“In Chicago, anything can happen in a year, let alone six years,” said Wilson, who has been organizing on behalf of a fully elected school board for more than a decade. He said he’s now working with other community leaders to press the legislature to amend the bill or pass a new one that would create a fully elected board, effective immediately.

His daughter is in sixth grade. By the time the city’s first fully elected school board takes office, he said, she will be a senior in high school. Virtually her entire CPS education will be affected by mayoral control. And that, Wilson said, can’t happen.

This article was originally posted on Chicago will have the largest elected school board of any major U.S. city