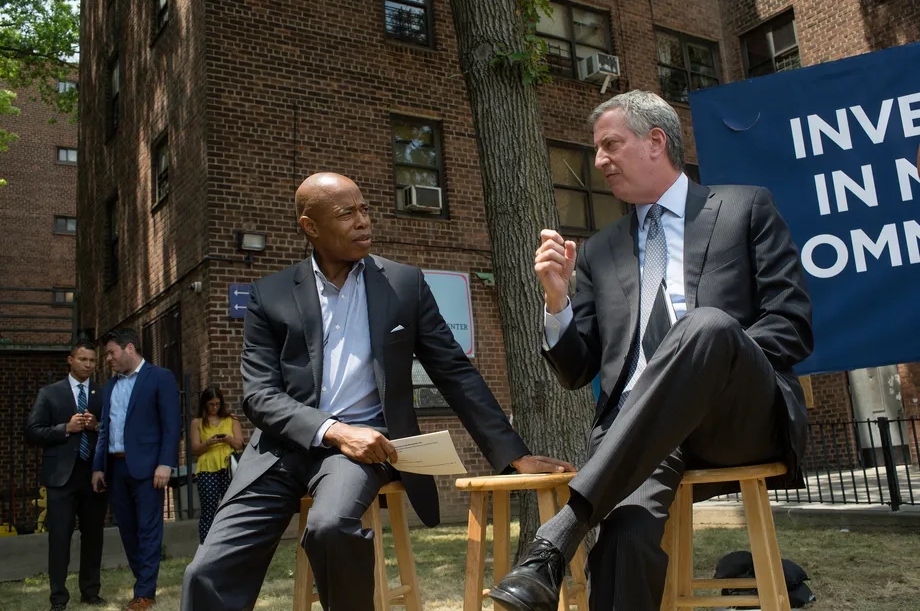 Facing pressure last summer in the midst of protests against racist police violence and the murder of George Floyd, Mayor Bill de Blasio agreed to move control of more than 5,000 school safety agents to the education department from the police department. The pledge reversed his longstanding opposition to such a transfer.

One year into the two-year transition, officials have said little about the process. Key questions have yet to be answered, including whether school safety agents will answer directly to principals, how their duties might change, and even if they will continue to wear police uniforms.

De Blasio promised to complete the transfer by June 2022, six months after he leaves office, leaving the complex logistical task of executing the move to the mayor’s successor. With Eric Adams winning the Democratic primary on Tuesday, and poised to sail through the general election in November, it’s unclear whether de Blasio’s proposal will come to fruition.

“A new mayor might not want to do any of it,” said NeQuan McLean, president of the local parent council in Brooklyn’s District 16, who supports the transition. McLean’s Bedford-Stuyvesant council held a town hall meeting on the issue in April where education department officials offered few details about how the transition would work.

There’s good reason to suspect Adams, a former police captain, might be skeptical of de Blasio’s transition plan. During the campaign, he argued against removing school safety agents and pushed back against calls for sweeping reform of the school safety division, though he said there should not be a “police culture” in schools. (Spokespeople for the Adams campaign didn’t respond to questions about whether he would move forward with the transition of the school safety division to the education department.)

Even if Adams were inclined to move forward with the transition, it’s not clear how much of the groundwork will be completed by the time he takes office. In the year since de Blasio announced the transition, advocates and observers said they have seen little signs of movement or even clear explanations about what policy goals the transition would accomplish. Some argue that de Blasio is content to let the fate of a proposal he was never enthusiastic about fall to the next administration.

“Maybe they’ll do cosmetic changes,” Matt Gonzales, the director of integration and innovation at NYU’s Metro Center, said of an Adams administration. “I don’t expect any significant progress toward reducing and removing police presence from school.”

The proper role of school safety agents has been the subject of heated debate for years. The agents play a variety of roles: greeting and signing in visitors to school buildings, deploying metal detectors at some schools, responding to fights, and even issuing arrests. In many cases, they’re called to respond to student mental health crises.

Civil rights advocates have long argued that they criminalize low-level misbehavior, disproportionately among black and Hispanic students. Arrests and summonses in city schools have been falling in recent years, but stark racial disparities have persisted. Still, most school-based arrests are carried out by regular patrol officers called into schools rather than safety agents stationed in buildings.

More recently, some advocates have pushed to sharply reduce the size of the division, whose budget has grown significantly under de Blasio and now stands at nearly $425 million. With more than 5,000 agents, it is by itself among the largest police forces in the country.

At the same time, large majorities of students, parents, and teachers agree that school safety agents help keep schools safe and respectful, according to annual school surveys. The level of agreement on those questions is lower, though still generally positive, at schools with larger shares of Black students.

The de Blasio administration has previously implemented reforms to reduce police interactions in schools for low-level offenses, but top officials have said little about the goals of giving the education department control of school safety agents.

Transferring the school safety division to the education department is “part of ensuring all of our students have safe schools and a caring adult to go to when in crisis,” Styer said. He noted the city is making other investments in school climate as well, including hiring 500 additional social workers.

Still, there are signs that broader changes may not be on the table.

In public meetings to update parents on the transition from the NYPD, education department officials have sought to reassure parents that school safety agents would remain in schools and that there were no plans to significantly alter their powers, including the ability to make arrests.

“There is no plan to relinquish any of their current authority,” Mark Rampersant, a senior education department official who oversees safety, told parent leaders at District 16’s April town hall meeting.

Other than training efforts, education department officials did not explain how the transition would change the way school safety works. Styer pointed to four different committees co-led by the police and education departments that are working out elements of the transition, though he declined to say who is serving on them or whether they include any outside groups. He said the city is on track to meet the June 2022 deadline to complete the transition.

Some external groups, including the union that represents principals and other administrators, have raised doubts about the transition timeline.

“The one meeting we had on this subject earlier this month provided no evidence that the DOE has a strong command of this daunting transition, and we are concerned that they are not developing plans quickly enough to meet their own deadline” Rosemarie Sinclair, a union official, wrote in a June newsletter.

To many observers, the lack of clear movement on the transition makes sense politically, as the mayor has long argued against the transition and only agreed to it reluctantly in the midst of last summer’s racial justice protests. Other elements of the transition, including a promise to move the school safety budget to the education department last year, have yet to take place.

“I think the mayor felt incredible public pressure to do something about police in schools,” said Johanna Miller, an education policy expert at the New York Civil Liberties Union who helped negotiate previous reforms to the school safety division. “The mayor is slow walking this so slowly it will no longer be his problem.”