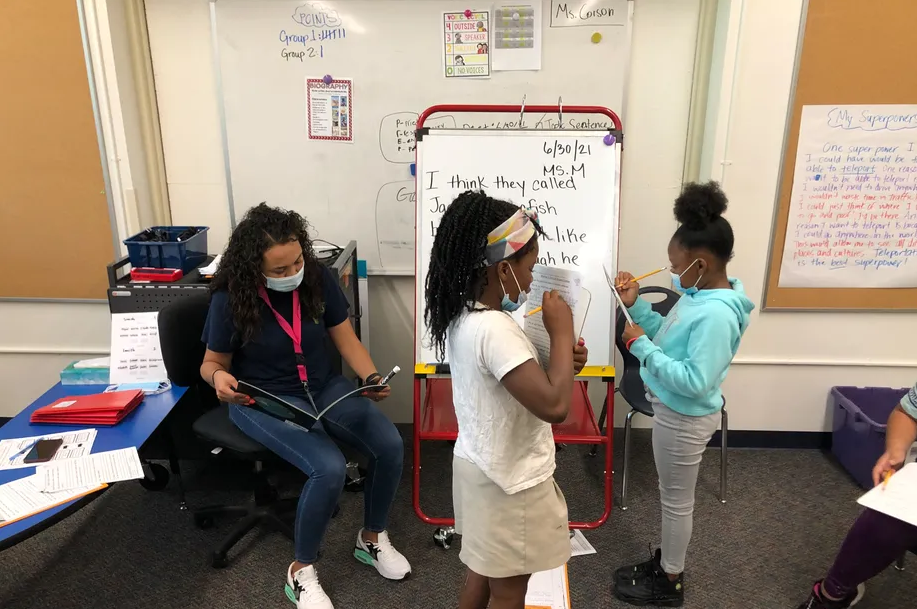 Elias Nelson stood at the whiteboard, dry erase marker in hand, facing down a five-digit math problem: 93,213 minus 59,758. He glanced at the boy next to him, who was working on a three-digit problem, and then back to his own trickier equation.

“You gave me a hard one!” Elias said.

His tutor smiled. “I challenged you,” she said.

“Because I believe in you,” she said.

Another boy, who was sitting at a desk, subtracting numbers on paper, piped up.

The boys are students at University Prep, a homegrown elementary charter school network with two campuses in northeast Denver. This summer, they’re participating in a six-week tutoring program meant to fill academic gaps that emerged during the COVID-19 pandemic. Funded with federal COVID relief dollars, the summer tutoring is part of University Prep’s two-year, three-pronged “catchup plan” to help students get back on track academically.

“If you’re in fifth grade and you haven’t been back in school since March of third [grade], we have a narrow window of time to make sure you’re equipped for middle school,” he said.

Singer said teachers and families made valiant efforts to help students learn during the pandemic. But he said end-of-the-year testing showed University Prep students, the majority of whom are Black and Hispanic and come from low-income families, had fallen behind.

Schools across the country got three rounds of federal COVID relief funding, starting in March 2020. The third round, in March 2021, earmarked $123 billion for schools nationally and $1.17 billion for schools in Colorado, including independently run charter schools. University Prep is slated to get about $5,150 in federal relief funding for each of its approximately 720 students, said Alastair Dawe, University Prep’s chief operating officer.

University Prep plans to spend some of those dollars on its catchup plan, including:

University Prep is not the only school providing tutoring this summer. Denver Public Schools has long run a summer academy for young students at district-run elementary schools who struggle with reading. The district did so again this year for about 1,700 students, both in-person and virtually, said district spokesperson Will Jones. That program, which employs district teachers, is funded by a mix of state and local funding, not federal COVID relief dollars.

To give its teachers a break, University Prep partnered with a local company called Impact Tutoring to run its summer program. One day last week, founder Ona Luistro was in a classroom with another tutor and six girls, who read aloud with her from a children’s book called “Manfish” about legendary oceanographer Jacques Cousteau. The students were working on reading fluency, one of the skills the tutoring program was designed to address.

“We’re on the second line, so I need everybody to open their books,” Luistro said.

“We’ll read that second line again, it says, ‘— the blue Mediterranean Sea with his new invention. He called it the aqualung because aqua means water and —’ Are you girls following along? ‘And our lungs are the part of our body that holds the air we breathe.’”

One student raced ahead. “‘Now he could swim across millions of oceans,’” the girl read.

“You gotta read together,” she said. “‘Now he could swim across miles of oceans.’”

In addition to bolstering students’ academic skills, Singer said the summer tutoring program is a way to ease kids back into the classroom. University Prep did offer in-person learning this past school year, but it was inconsistent. When COVID-19 case rates spiked, all Denver public schools, including University Prep, switched to remote learning. And a sizable portion — about 40% — of University Prep students opted to stay remote for the entire year.

Gladys Boston, whose granddaughter Harmony is going into fourth grade at University Prep, said the summer program has been a blessing. Harmony was back and forth between in-person and remote learning this past year, and Boston said it was hard for her granddaughter to concentrate on schoolwork when she was at home. She also missed her friends, Boston said.

Now Harmony comes home from the summer program excited to tell her family what she learned that day, and excited about hanging out with other kids, her grandmother said.

It’s too early to tell if the summer program will improve student test scores. And given that University Prep is deploying multiple catchup strategies, it may be difficult to discern what made a difference and what didn’t, Singer said. But Luistro said she’s seen students grow in the first three weeks of the program. And students say it’s helpful.

Elias said he already feels less nervous to come back to school for fifth grade, after nearly a year and a half of learning remotely from home. “Summer school is fun because it gives you the time to learn about stuff that you haven’t learned about,” he said. “Or if you have learned it, and if you don’t remember it, it’s helpful to refresh it.”

That was the case with the five-digit subtraction problem. The first two times he tried it, he started from the left and not the right. After a reminder from his tutor, he nailed it.