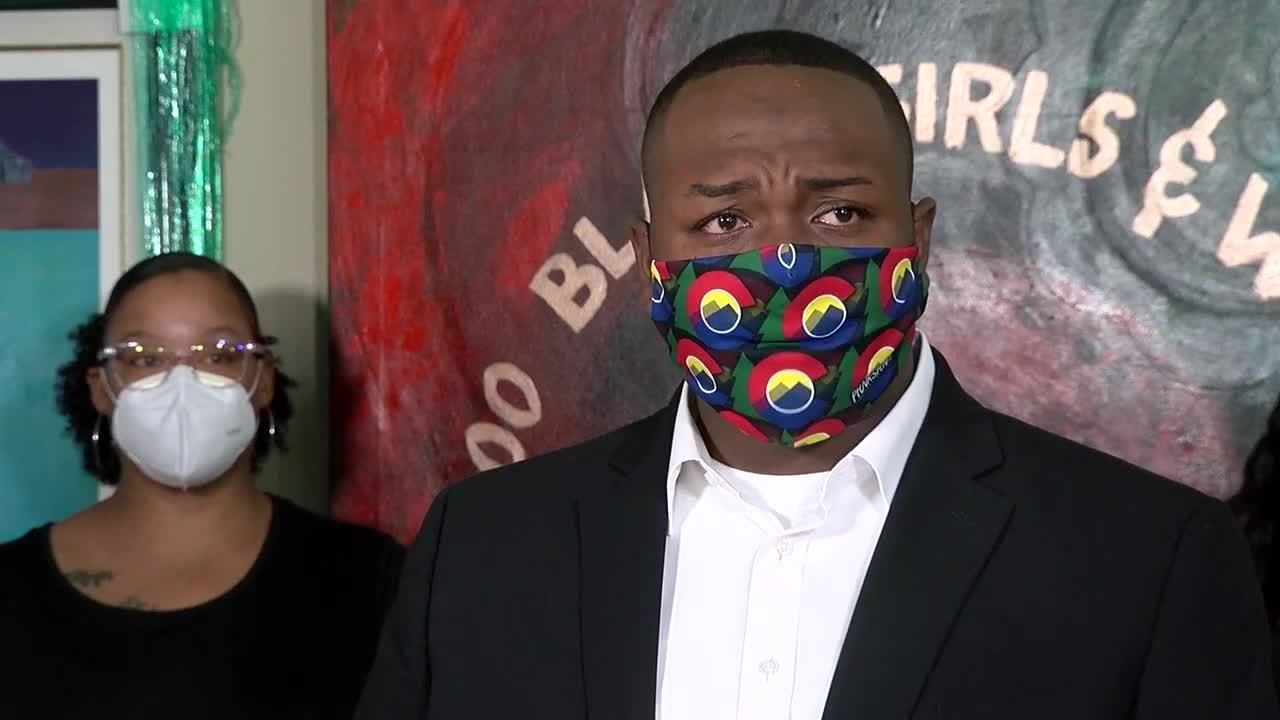 When Tay Anderson was running for an at-large seat on the Denver school board in 2019, the teachers union tried to persuade a candidate for a different seat to switch to the at-large race. Union leadership was worried allegations about Anderson’s behavior would become public and knock him out of contention, according to two people who were present for the conversations.

But Denver Classroom Teachers Association President Rob Gould denied that fears over possible allegations against Anderson, who is now the subject of a third-party investigation initiated by the school board, were the reason that the union’s political arm tried to get candidate Radhika Nath to switch from the southeast Denver school board race to the at-large race.

“The assertion that we asked Ms. Nath to switch races because of any allegations against Mr. Anderson is not true,” Gould said in a statement. “Early on in the process, as is always the case, multiple people can be sought out and can come forward as potential candidates for endorsement. DCTA was looking at all options. After navigating the endorsement process and receiving member input, Mr. Anderson is who we ultimately recommended.”

Nath declined to comment to Chalkbeat. However, two people in Nath’s campaign who asked to remain anonymous confirmed that DCTA asked Nath to move because leaders expected a sexual assault allegation against Anderson to surface. Specific details were not revealed at the time, and the Nath campaign was not provided with proof.

Asked whether Anderson or his campaign knew about a sexual assault allegation in 2019, Anderson’s lawyer Christopher Decker said in an email, “That is not accurate and I do not believe there will be any evidence (contemporary in time) to support that.”

Caine did not return messages and texts from Chalkbeat.

Anderson, 22, won his election. Now, two years later, Denver Public Schools has hired a private firm to investigate multiple accusations of sexual assault and harassment against him. The investigation is ongoing, and the district has not announced its findings.

The most serious allegations have been anonymous and second hand, with adults coming forward to say young women confided in them. Chalkbeat has not been able to independently verify or disprove these allegations. Anderson has denied sexually assaulting anyone.

A small group of elected and appointed teachers union members choose which candidates the DCTA Fund, the union’s political action group, will support.

A member of the DCTA Fund in 2019, middle school music teacher Priscilla Shaw, said concerns about Anderson also surfaced during the endorsement process via a letter that was read aloud to the Fund members.

Shaw said the letter allegedly was written by a young woman, but Shaw doesn’t know to whom it was originally addressed. The letter didn’t explicitly reference sexual assault, Shaw said, or specify what had allegedly happened between the woman and Anderson. But Shaw said she got the impression that the woman was traumatized by Anderson.

“The tone was fear, trauma, desperation: ‘I need help, but I don’t feel safe,’” Shaw said.

In a statement, Gould said the DCTA Fund “did receive anonymous information during this process about Tay Anderson that was not verifiable.” He said the Fund followed its official endorsement process in 2019, including in Anderson’s race.

Shaw said she and other members of the DCTA Fund were concerned about the contents of the letter, but she said they were not able to speak to the author nor verify what she’d written. Because of that, Shaw said, “some members of the Fund decided not to use that information when they decided in the endorsement process.”

After endorsing Anderson, the DCTA Fund contributed $40,000 to his school board campaign, according to state campaign finance records.

In his statement, Gould said the union respects the school district’s recent decision to hire an outside firm to investigate allegations against Anderson.

“It is not appropriate for us to provide any more comment during a pending investigation, but [we] look forward to reviewing the results when and if they are made public,” he said.

Anderson’s lawyer, Decker, said in a statement that the union never told Anderson about a letter in 2019. He said Anderson didn’t know about it until Chalkbeat asked.

“This is the first time Director Anderson has heard about this communication and to this date has never read it,” Decker said. “In 2019, there were various individuals trying to get other candidates to run against him and cited that he was unelectable due to his age and color of his skin. Director Anderson is deeply disappointed that the Denver Classroom Teachers Association hid this communication, if in fact it exists, from him.”

Despite repeated efforts and requests, Chalkbeat was not able to obtain a copy of the letter or any other documentation related to the meeting.

Four of the seven seats on the Denver school board were up for grabs in November 2019, including the at-large seat that Anderson won. The possibility of shifting the balance of power on the board led to a hotly contested race with a crowded field.

The pressure for Nath to move into the at-large race was referenced publicly during the campaign. In October of that year, one of Anderson’s opponents for the seat, Alexis Menocal Harrigan, said at a public candidate forum hosted by the local NAACP branch that the teachers union’s political arm had tried to recruit Nath into the at-large race.

Menocal Harrigan told Chalkbeat that at the time, she didn’t realize why DCTA was trying to recruit other candidates into the at-large race. At the forum, she implied the union’s maneuvering was unfair.

“I do think DCTA has been operating in a way that has been inequitable,” Menocal Harrigan said then. “DCTA asked Radhika to jump into the at-large race after Tay had already announced because they thought she had a better chance of beating him.”

But Menocal Harrigan said that later she learned another reason the teachers union was trying to recruit other candidates into Anderson’s race.

“After the 2019 races, I came to find out from Radhika’s campaign and from within the DCTA that the reason Radhika was asked to move over was to hedge the potential liability of sexual assault allegations against Tay Anderson,” Menocal Harrigan said.

Anderson is a Denver Public Schools graduate who worked for the school district at two high schools after he graduated. He was a vocal supporter of the teachers union during a strike in February 2019, nine months before the election. He also has been an activist, helping to lead high-profile protests against racism and police brutality last summer.

Sexual abuse allegations against Anderson surfaced publicly in March, nearly a year and a half into his four-year term on the school board. The civil rights group Black Lives Matter 5280 said a woman told them Anderson had sexually assaulted her.

Anderson has repeatedly denied it. “I am not aware of any actions of mine that could be considered or construed as sexual assault,” Anderson said in March.

Separately, former members of youth-led anti-gun violence group Never Again Colorado said Anderson engaged in inappropriate behavior when he was the group’s president in 2018. A letter written in April by six former members of the defunct group says Anderson made them feel uncomfortable and unsafe. The former members asked to remain anonymous.

“Doing so abused many power imbalances,” the letter says.

In 2018, Anderson told the weekly newspaper Westword when he resigned as president of Never Again Colorado that he didn’t want to “hog the spotlight.” But in April, after the members’ concerns became public, Anderson gave a different explanation. He said that when confronted in 2018 about what he described as “various explicit comments I made as a teenager,” he acknowledged they were inappropriate and later resigned as the group’s president.

“I did so because I believe in the power of restorative justice, I believe in empowering survivors, and I believe in listening, reflecting, and making amends when I have caused harm,” he said.

After the Never Again Colorado concerns and the sexual assault accusation against Anderson from Black Lives Matter 5280, Denver Public Schools hired an outside firm in April to do a “thorough and independent fact-finding investigation.”

Most recently, Denver parent and activist Mary-Katherine Brooks Fleming testified before a Colorado legislative committee in May that dozens of young people came to her starting in August seeking protection from a specific man “in a position of trust.”

Brooks Fleming did not name Anderson in her testimony, but the Denver school board later said it was aware the allegations were against Anderson without providing more information.

Through his attorney, Anderson denied those allegations as well.

The school district has investigated Anderson before. In 2018, when Anderson was a paraprofessional at his alma mater, Manual High School, he was cited for violating the district’s policy against retaliation. A former Manual High employee reported that Anderson was retaliating against people who complained about the former Manual principal.

This article was originally posted on Denver teachers union was told of allegation against Tay Anderson two years ago, sources say