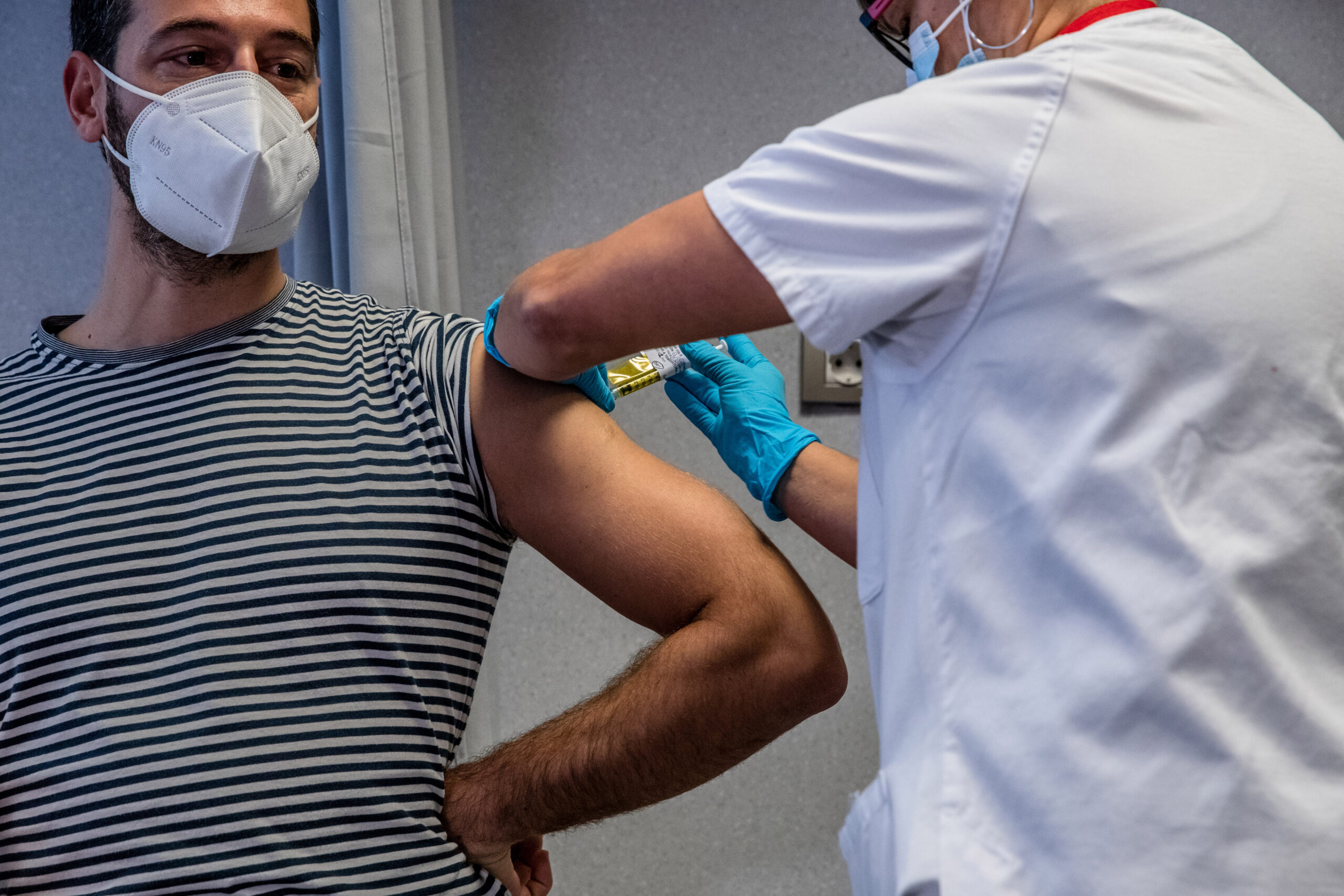 Every May for seven years, Ricardo* has taken a 20-hour bus ride from his hometown in Veracruz, Mexico, up north to the city of Monterrey. There he waits to board another bus, this one traveling 125 miles to the southern border of the United States and onto its final destination: Vass, North Carolina to plant and harvest tobacco and pick sweet potatoes.

He’s one of thousands of workers who meet in Monterrey each spring to sign their H-2A visa program contracts and make the journey to the U.S. This year, the H-2A worker contracts include an additional packet: information about the COVID-19 vaccine.

Ricardo read through it on the bus ride and made the decision to get his shot in N.C.at the beginning of May. “I did it for my own safety,” said Ricardo, who requested a pseudonym for fear of retaliation from his employer for speaking publicly about his work. “Just imagine. We all came from different places and COVID rates are different in each area. We can’t tell who could be carrying [the virus].”

According to the N.C. Department of Health and Human Services (NCDHHS), 13,998 doses of the COVID-19 vaccine were administered to the farmworker community from March 3 to May 21—19% of the estimated 72,000 farmworkers to arrive in N.C. this year. At least 7,495 of those workers have completed the series of doses. Data are based on survey reports from local teams in 37 counties.

Elizabeth Freeman, director of the NCDHHS’s Farmworker Health Program, said that on March 3, when all farmworkers became eligible to receive the vaccine, “people were getting the vaccine that day.”

The speed at which farmworkers are getting vaccinated is a testament to the silver lining that many worker advocates have highlighted during the pandemic: in the thick of it, coordinated partnerships among nonprofit advocacy groups, health departments and clinics, and local governments are building at a rapid pace.

“I see it as a critical moment of so many people coming together to respond to the challenge,” said Freeman.

Many farmworkers in the U.S. South were not provided with personal protective equipment on the job. For example, Ricardo said he wasn’t given any PPE on the ride into N.C. last year. This season, they were given a pack of masks and hand sanitizer.

“I think the challenges we’ve experienced with COVID and somewhat with the vaccination plan, comes down to the farmworker population being very hard to reach and serve,” said Freeman.

North Carolina expects at least 72,000 farmworkers this year, according to the N.C. Department of Health and Human Services and the N.C. Department of Commerce. Just 22,500 of those workers are through the H-2A program. An estimated 16,300 field workers live year-round in eastern North Carolina. At least 33,000 others piece together a migrant path through the southern states to work various crops depending on the season and need.

For this reason, NCDHHS data does not present a complete picture of all vaccinated workers in the state, though it does include all three groups. While many workers are getting vaccinated at federally supported health clinics or at their work sites, a growing group of workers, especially more permanent N.C. residents, are getting vaccinated at community events and clinics led by churches and nonprofits, which are open to the entire public.

Agencies like the N.C. Farm Bureau and N.C. Cooperative Extension are also involved in the process. Freeman said her program hosts biweekly work sessions with growers, or farm owners, to keep a rolling conversation about vaccination effort and general farmworker health.

It took a pandemic for key players in the agriculture industry to hone in on better working conditions. Freeman reiterates that “through last year and now definitely into the vaccination plan, we have been thrilled” by the coordination so far.

There’s still much work to be done to hold the agricultural industry accountable: The state’s labor and health and human services departments still do not require farm owners to provide alternative isolation housing for workers sick with COVID-19. As first reported in Enlace Latino NC in September, Gov. Cooper rescinded his promise to issue an executive order to better protect farmworkers (one he made in a virtual town hall with Latinx community leaders) after pushback from the state’s agriculture and labor departments.

But this year’s more proactive approach is leading to cohesive planning and successful results so far. Freeman said the state’s vaccination plan is about “supporting outreach to the workers where they live and with transportation and the hours that are available for workers to get the vaccine — because any barrier that was already there is heightened.”

The health department in Duplin County— an eastern N.C. county where 24% of the population is Hispanic—has augmented partnerships within the community. Health department director Tracey Simmons-Kornegay stepped into her role only a year and a half prior to the pandemic. But she said “there had not been much interaction with other Latino groups in the county” before that.

“From my clinical background and being a native of Duplin County and knowing of our diverse population, I knew there were barriers and a lack of resources,” said Simmons-Korenegay. “What interests me in public health is to come in and say, ‘what are our challenges and what are our opportunities?’”

The Duplin County health department is co-hosting evening vaccination clinics with NC FIELD, a farmworker advocacy organization. According to Yesenia Cuello, NC FIELD’s executive director, 817 Duplin County workers were vaccinated at evening clinics between March 31 and May 26. Simmons-Kornegay pointed to this rate as an example of how hosting nighttime events can “remove a barrier” for workers who spend the day in the fields.

Last year, during the thirty-plus hour journey from Monterrey to Vass, Ricardo was not worried about the virus. But, he said, that lack of concern came from ignorance. “I did not believe in the coronavirus,” he admits.

And coming from Mexico, a country where corruption openly pervades politics, he assumed that the pandemic was a hoax. “At first it felt like a smoke and mirrors on behalf of the Mexican government to distract people from politics,” he said. “There were so many myths. But then I arrived here [last year] and realized things were very different. The coronavirus was everywhere, not just an idea in Mexico.”

On the ground in N.C., community health workers are combating similar myths about the virus and the vaccine in Latino worker communities. Araceli Santiago quit picking crops at the beginning of 2020 to train as a community health worker, or promotor, through the Episcopal Farmworker Ministry based in Dunn, N.C. She is among a group of about a dozen promotores, mostly former or current agricultural and farmworker communities, who visit people’s homes twice a week to educate their own community on vaccines and other related coronavirus health issues.

According to Lariza Garzon, executive director of the Episcopal Farmworker Ministry, at least 450 people have been vaccinated at three evening clinics hosted by the organization in Harnett County.

Community health worker Santiago also visits farmworker labor camps to share information about the vaccine and open clinics in collaboration with county health departments. She said after workers learn more about the health benefits, many of them feel relieved to know they have access to the vaccine.

“When you’re a farmworker you often don’t know your own rights,” she said. “I hope everyone who isn’t vaccinated comes to get the vaccine. And [that they know] there are organizations to support farmworkers. They are not alone.”

At all of the vaccination sites jointly hosted by the Episcopal Farmworker Ministry and NC FIELD, anyone who shows up has the option of going home with a box of groceries and produce. Sometimes the food is donated by a local supermarket; most times they are provided by the USDA.

The effort speaks to a type of community aid that comes from within the community itself, cognizant of the myriad issues facing workers during a pandemic, including food insecurity. Cuello, of NC FIELD, handed out taquitos and gas station gift cards at a recent clinic. She said farmworkers earning low wages have been going hungry during the pandemic. In the last decade, research has shown that at least 51% of farmworker families in N.C. are food-insecure.

Cuello said farmworkers have been “making the hard decisions between driving to a COVID testing event or going to the grocery store, or buying hand sanitizer and masks over food.”

Ricardo is proud of getting vaccinated for the safety it will provide on the job, but also for remaining healthy to return to his wife, children, and family in Mexico in November. His parents, in their seventies, just received their vaccines in Veracruz last week.

“There are people who are scared to get vaccinated,” he said, “but it’s about everyone staying safe.”

This article was originally posted on N.C. has vaccinated over 13,000 farmworkers. Advocates are making it happen.