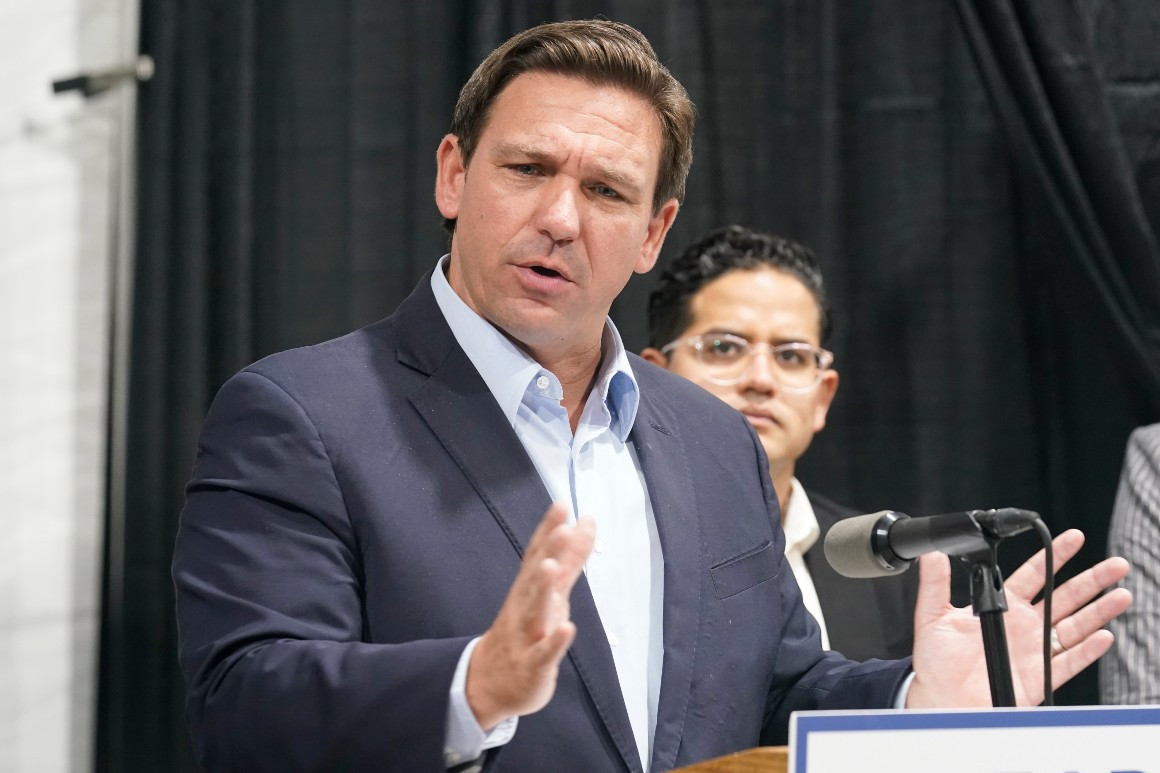 A controversial elections law adopted by Florida legislators this year is facing stiff legal challenges in federal court, but Gov. Ron DeSantis is calling on lawmakers to double-down on “elections integrity” in 2022.

“First of all, I don’t even think we should have drop boxes, to be honest with you. But unfortunately, there’s a lot of people in your Legislature that thinks that it is,” he said during a news conference in the Hilton Palm Beach Airport Hotel in West Palm Beach, acknowledging that absentee and early voting are popular with Florida Republican voters.

DeSantis said it can be difficult for local law enforcement to handle elections crimes and a statewide office with expertise in elections law is needed. “If someone’s ballot harvesting, you report it to these people, and this is their sole job,” he said.

“If somebody brings a sack of ballots and they’re stuffing them in a drop box, you have a place that will field these complaints and will immediately be able to investigate and hold them accountable,” he said.

DeSantis did not say if he would submit proposals to the Legislature to adopt during its Nov. 11-15 special session, or wait until lawmakers convene their 60-day regular 2022 session on Jan. 11.

The governor’s preliminary proposals are designed to gird, or be a follow-through to, Senate Bill 90, a bitterly-opposed “elections integrity” bill adopted by lawmakers in May and signed into law shortly after by DeSantis live on “Fox & Friends” in the same venue, the Hilton Palm Beach Airport Hotel, where he spoke Wednesday.

SB 90 adds more identification requirements for absentee ballots; requires voters request an absentee ballot for each election, every two years; limits who can collect and drop off ballots to prevent “ballot harvesting”; and expands the presence of partisan observers during the vote-counting process.

The bill was fiercely opposed by Democrats, voting rights groups and 66 of 67 county elections supervisors. The League of Women Voters of Florida and the NAACP LDF are among groups that have filed federal lawsuits set to be heard soon by U.S. District Judge Mark Walker in his Tallahassee courtroom.

SB 90 limits use of drop boxes but doesn’t ban them, which DeSantis said is too bad. He said he will propose rules that require drop boxes be observed at all times and not be left out overnight.

The governor said he also wants lawmakers to impose time limits for county elections supervisors to “clean their voting rolls” so they don’t mail people ballots for years after they’ve died or moved “the way California does.”

With a growing and shifting state population, Florida needs to pay more attention to the accuracy of its voters rolls, he said.

“Some states really have very stable populations. We have a very dynamic population,” DeSantis said. “Now, we have more people moving in than move out, but nevertheless, that’s just the reality of what we do.”

DeSantis touted Florida’s growing job market, claiming many newcomers are fleeing high crime and taxes “voting with their feet. They’re leaving failed states, and they’re trying to come to a state that’s going to be well managed and well-governed.”