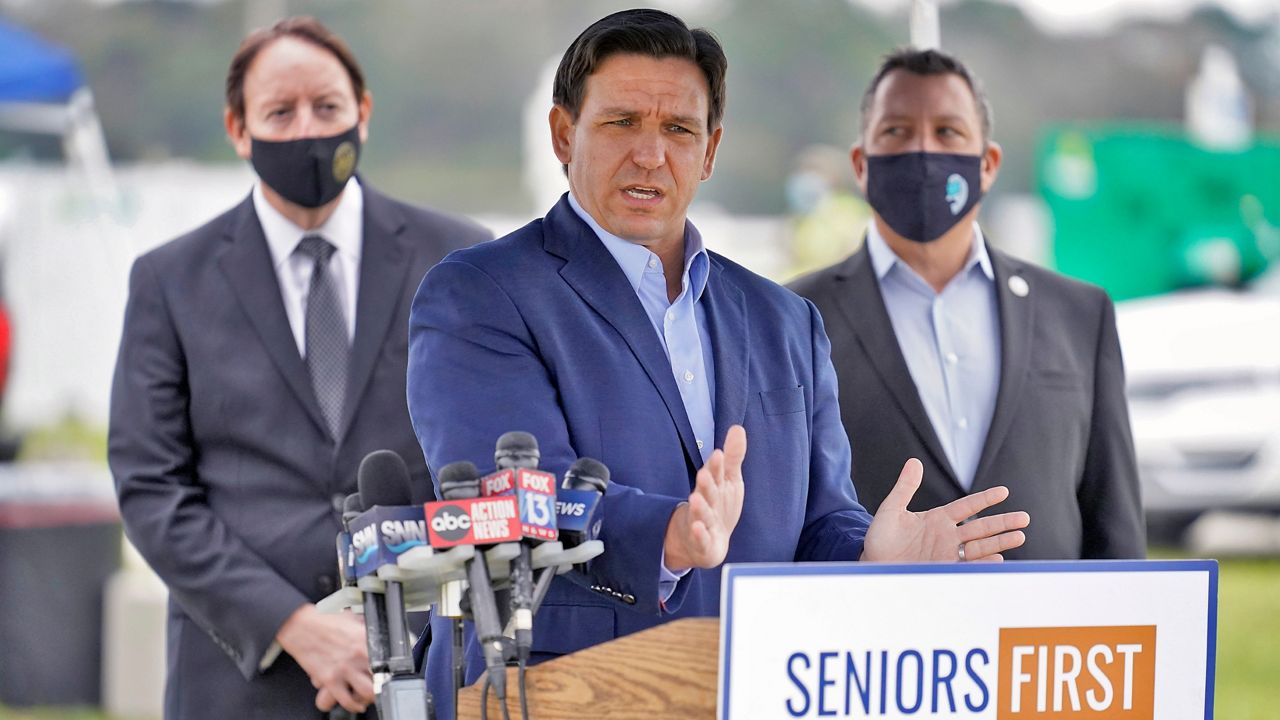 Florida Gov. Ron DeSantis is reveling in rare consensus as some Democrats and respected media analysts join his conservative allies in blasting Sunday’s “60 Minutes” report about claims of vaccine favoritism in Florida.

And he’s sparing no forum in sharing his delight in public appearances across Florida and in TV interviews on Fox News and other networks Monday, Tuesday and Wednesday.

The claim has been widely repudiated not only by DeSantis and Publix, but by state and local officials from both parties.

Flanked by Division of Emergency Management (DEM) Director Jared Moskowitz, a Democrat, the governor Wednesday detailed his case against the report in a “FACTS VS. SMEARS” presentation.

The “pay-for-play’ allegation is “verifiably false because I know that decision was made in my office. I’m the one making the phone call, and I tried to go to Walmart first. So, the whole Publix pay-to-play thing is garbage,” Moskowitz said.

“I know corporate media thinks they can just run over people. You ain’t running over this governor. I’m punching back and I’m going to continue to do it until these smear merchants are held accountable,” DeSantis said. “That’s why nobody trusts corporate media. They are a disaster in what they are doing. They knew what they were doing was a lie.”

“60 Minutes” said DeSantis turned down requests for an interview but Alfonsi questioned him about the Publix donation during a new conference. The governor said his response was two minutes long and deceptively edited to a soundbite.

“If they’re going to come down here and smear our efforts, or smear me, or smear great companies in my state, I’m going to hit ‘em back right between the eyes here,” DeSantis said, adding he’s pondering legal action against CBS.

In a Wednesday analysis, Tom Jones, senior media writer at Poynter.com, produced by the Poynter Institute, the St. Petersburg-based journalism think-tank, said the segment made a “pay-to-play” allegation but “didn’t deliver substantial evidence that DeSantis did any such thing.”

The irony, Jones writes, is the Publix donation had nothing do to with the premise of the story, which was influential Republicans allegedly received preferential treatment in receiving vaccines through a “community pod” program some allege DeSantis used as a 2022 campaign tool.

“Yet the “60 Minutes” piece used that as the main evidence for its premise that DeSantis did something shady. They really didn’t have much else on that topic. There was really no there there,” he wrote, calling it “a sloppy moment.”

DeSantis Wednesday offered his own interpretation: “This is one of the biggest face-plants of corporate media.”

According to Florida’s Division of Elections, Publix donated $100,000 to Friends of Ron DeSantis on Dec. 31, five days before he announced the state’s exclusive partnership with Publix to provide vaccines for the general public over 65.

Critics objected not because of political optics, but because the grocery chain isn’t widespread enough, with few stores in low-income and Black neighborhoods, creating “vaccine deserts.”

Former Florida governor and now U.S. Rep. Charlie Crist, D-St. Petersburg, who is pondering a 2022 gubernatorial run against DeSantis, has called for a U.S. Justice Department probe of the alleged vaccine favoritism.