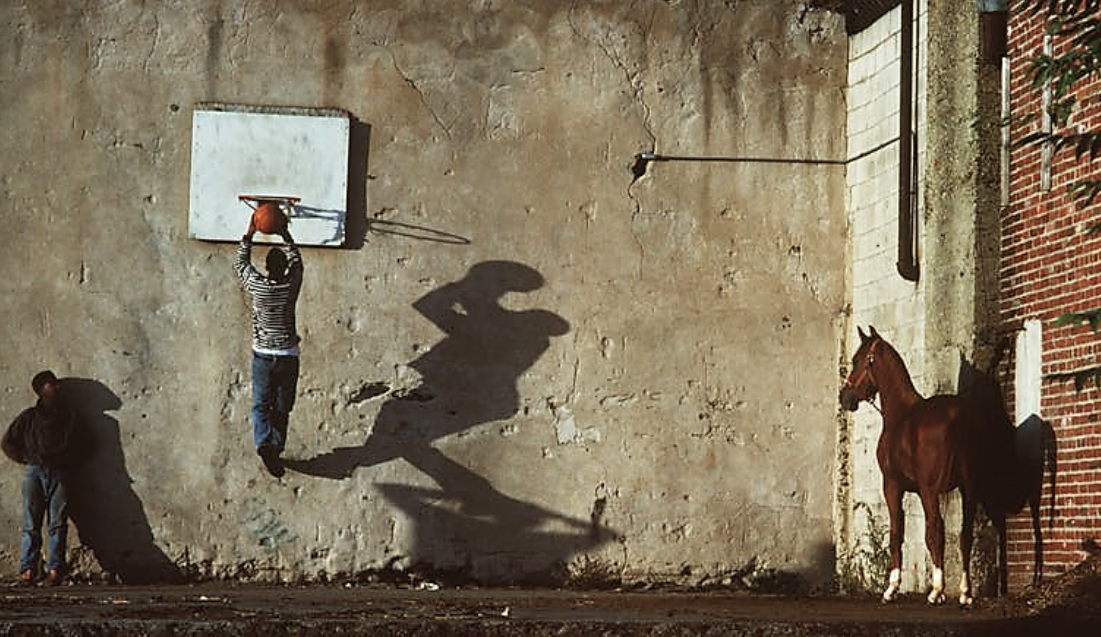 But he wanted, he told me, “to get away from horses,” and in 1983, he landed a job as a staff photojournalist at the Philadelphia Inquirer, where he found himself drawn to a range of subjects, from storefront churches to star jump-ropers.

Then, in the early 1990s, he photographed North Philadelphia’s drug culture, spending periods of time living in heroin dens and crack houses. Burned out from the despairing subject matter, he decided that for his next undertaking, he wanted to do something that would lift his spirits.

Sometimes he’d be walking around in the park, and he’d see a guy come around the corner wearing a big cowboy hat, riding a horse.

“It was just so unexpected,” he recalled. In Oklahoma – sure, whatever. But in the city?

One day, he approached one of the men and asked him if he could do a story on them.

How did these riding clubs operate?

Well, there are a lot of groups. The Fletcher Street Urban Riding Club has sort of become the one that everybody knows, because it’s the one that was featured in [G. Neri’s young adult novel] “Ghetto Cowboy,” and now the movie.

But the one that I spent most my time with was this big one in Brewerytown, the Western Wranglers. They occupied an abandoned building called the White House that had been turned into the stables. It was big, with something like 15 or 20 bays of horses, and it was an operation. They would hold these impromptu parades through the city. Eventually the White House got turned into condos.

A guy called Bumpsey – George Bullock was his real name – owned the White House with his sister. He seemed to sort of organize everything. He was so fit, and he looked like a cowboy, with the big bar mustache. Just an incredibly attractive guy.

I got a call from him last fall, completely out of the blue. I hadn’t talked to him in around 25 years. About a month later, he died of COVID.

Do you know the origins of the clubs?

A lot of [original club members] had grown up in the South and came up to Philadelphia, where there was already an infrastructure [for horses] in place.

Philadelphia used to have a lot of stables because there were food carts, and people would put the fruit and vegetables on the horse-drawn carts and then go through the street to sell their wares. That sort of tradition died out, but the stables were still there.

Once the photos were published, how did readers react?

We got a ton of mail. It was amazing.

Some wrote, “There’s no such thing as Black cowboys.” They actually said that. I’m like, “These pictures prove that! I’m not making this up!” They were just amazed that Black people could be cowboys.

And of course many were just happy to see the story because it kind of opened their eyes. Then we had a lot of mail from Black folks that read, “Yeah, I’ve known this all along. I’m just glad somebody is bringing it to the forefront.”

I went to my editor and said, “Look, we got so much good mail. I know that there are other stories out there across the country that we could do.”

They went along with it. So I went out and found stories in Texas and Illinois and California. National Geographic saw the stories and offered me a development grant to do it for them. I took a leave from the paper and went out and shot even more photographs.

Where did those stories take you?

There was a big rodeo that happened in Okmulgee, Oklahoma. I went out there and photographed that. I found a Black couple who was actually getting married Western-style in Texas – instead of having the limo, they had a stagecoach. One woman came with her pet pig, and the pig had pink toenails.

I spent time in a little town, just south of Brownsville, Texas, out in East Texas. Every Sunday, these folks got together and they just had these impromptu rodeos: They threw money in the hat, and they did the bull riding, the calf roping, all that stuff. Then on Saturday they had these crazy parties until four o’clock in the morning near the rodeo arenas on their ranches. Just amazing.

During the George Floyd protests last summer, some of the protesters got a lot of attention for appearing on horseback in places like Los Angeles and New York.

Yeah, and that’s great. But you know, I’m most interested in the communities where that lifestyle is just part of who you are.

After [rapper] Lil Nas X became popular [in 2019], everybody got really interested in Black cowboys. The Studio Museum in Harlem had an exhibition, and they invited me and some other folks who had made photos of cowboys. I went up and I didn’t have a cowboy hat or anything. I didn’t want to even pretend to be a cowboy, you know? But I went up there and there was one guy and he was dressed in a fancy Western getup.

So there are always going to be people that just like to wear the stuff, and that’s different from the people that actually live it – the people in these little places I found down in Texas and California.

I have a cousin, Donnie – he lives in Alabama now – and after Black cowboys started getting really popular, I asked him if he considered himself a cowboy.

He said, “I wore the Wranglers. I wore the hat, had the cowboy boots. I would get up and feed the horses and cattle and all that. But I don’t consider myself a cowboy.”

People like Donnie aren’t doing it for show. I’m not putting the people down that ride the horses in protests. I think that’s great. But I’m really interested in the small communities out there of Black people, where it’s just the way of life.