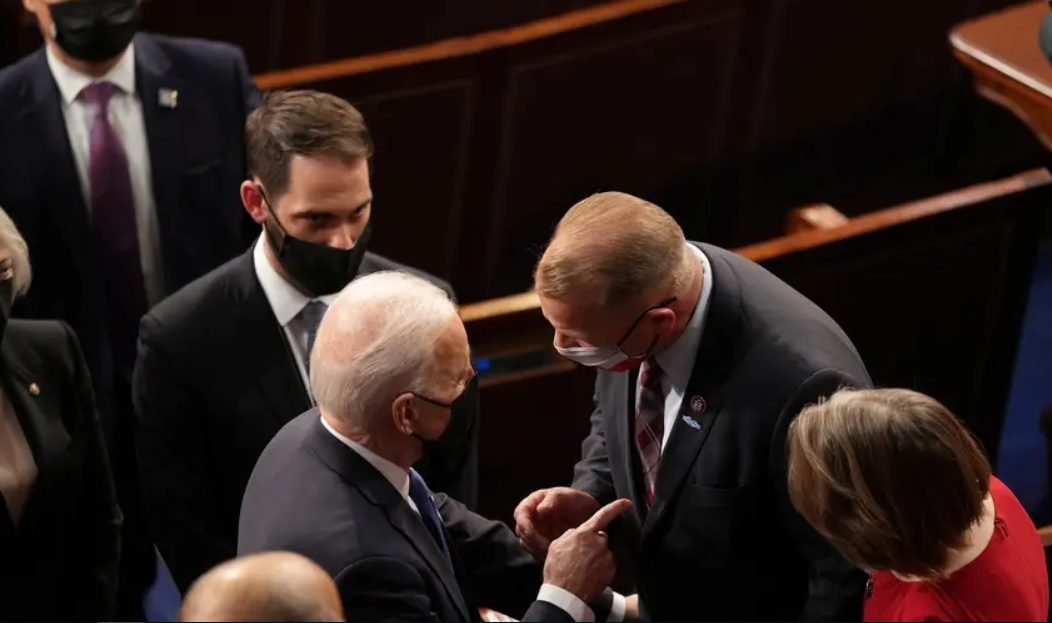 After Biden’s hour-long address to a joint session of Congress, he made his way to the back chamber when Nehls reached out to him in the aisle and asked to help with a potential overhaul of the country’s criminal justice system.

“I am a sheriff from Texas … the most diverse county in the country,” he said, referring to Fort Bend County. “I want to help with the criminal justice reform. I want to be part of that. … So I don’t know how to reach out to you, but I have the experience.”

“I’ll reach out to you,” Biden could be heard replying.

Biden administration staff reached out to Nehls’ office on Thursday morning, according to Nehls spokesman Daniel Gribble. Gribble added that Nehls is “optimistic about common sense reforms they can accomplish” and the congressman’s focus is “recidivism reduction through inmate training programs.”

“As Sheriff, Rep Nehls implemented HVAC and welding programs for non-violent inmates at the county jail,” Gribble said. “He had wild success reducing the 2 year re-arrest rate with participating inmates. He’d like to see similar programs available in County jails across the country and is working on legislation that will make that possible.”

Criminal justice is a rare issue that can bring together members of both parties. During the Trump administration, Republican U.S. Sen. John Cornyn spearheaded changes to the system that drew overwhelming support from each party.

Nehls served as Fort Bend County sheriff for eight years, and made his law enforcement experience a key part of his 2020 campaign. He painted himself as a friend of police, echoing the language of President Donald Trump, Gov. Greg Abbott and other GOP leaders about law and order and backing the blue. Democrats, meanwhile, sought to bring attention to his record that includes a history of alleged misconduct — he was fired from a prior policing job after committing 19 violations in one year — and complaints about his Fort Bend department’s methods.

His policing background has emerged in other ways in his freshman term: Back on the Jan. 6 insurrection at the U.S. Capitol, he joined with several other members to barricade a door on the House floor.

As for Nehls’ tactic with Biden, it is a proven one.

U.S. Rep. Sheila Jackson Lee, a Houston Democrat, has long been known to spend much of the day ahead of the speech staking out a prime spot on the aisle where the commander in chief walks through the chamber. But beyond a chance at a moment on national television, Jackson Lee uses the opportunity to lobby the president and Cabinet.

In 2009, she successfully seized the moment to convince President Obama’s Secretary of Transportation, Ray LaHood, to make Houston his first visit on the job.

Despite the moment of goodwill, Nehls criticized Biden’s speech on Twitter for not referring to the overwhelming migrant influx at the U.S.-Mexican border as a “crisis.”

This article was originally posted on Freshman GOP Texas congressman made a personal pitch to Joe Biden: Let me help with criminal justice reform