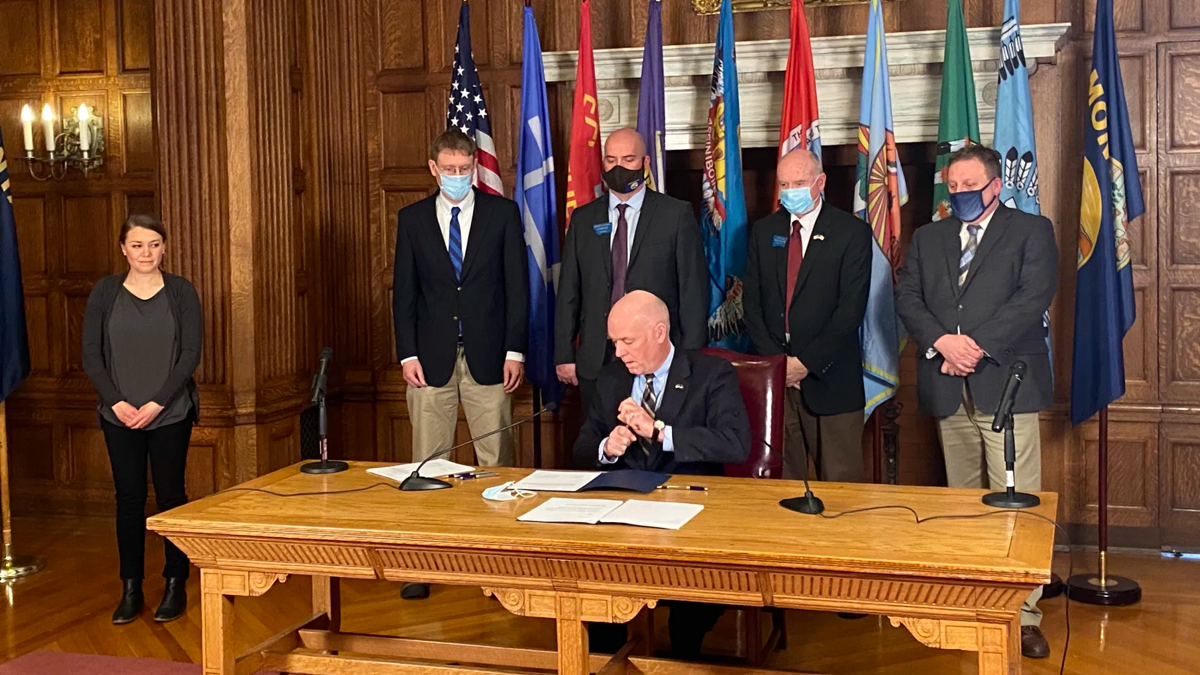 Montana Gov. Greg Gianforte said Wednesday he will lift Montana’s statewide mask mandate this coming Friday, fulfilling a pledge he made last month to end the mandate as the state enacts a COVID-19 liability shield law and makes progress vaccinating Montanans against the virus.

The announcement came at a signing ceremony for Senate Bill 65, which is intended to check that first box by protecting businesses, nonprofits, churches and health care providers from most lawsuits over people catching the virus on their premises.

That bill, sponsored by Sen. Steve Fitzpatrick, R-Great Falls, shields entities from civil liability stemming from COVID-19 injuries or death with some exceptions, including situations that constitute “gross negligence” or “willful and wanton misconduct.”

“If you’re taking reasonable and responsible precautions to protect your employees, your members, your customers from COVID-19, you shouldn’t have to worry about unnecessary litigation,” Fitzpatrick said in a statement. “At the same time, this bill doesn’t give anyone a free pass and it makes clear that Montanans are protected from bad actors.”

Gianforte, a Republican, campaigned against the mask mandate enacted by his predecessor, Democratic Gov. Steve Bullock, in last year’s election. He said then and since taking office in January that he would prefer to have the state tackle the pandemic with voluntary measures as opposed to government mandates.

“When it comes down to it, I trust Montanans, and together we can combat this public health and economic pandemic with personal responsibility by looking out for one another,” Gianforte said at Wednesday’s ceremony.

Local jurisdictions, Gianforte said, will still be able to enact or maintain their own mask mandates if they so choose. Additionally, President Joe Biden has issued a mask mandate that applies on federal property.

“Research has demonstrated that COVID-19 infections and deaths have decreased when policies that require everyone to wear masks have been implemented,” Walensky said at a White House briefing. “So with cases, hospitalizations and deaths still very high, now is not the time to roll back the mask requirements.”

A study the CDC released last month also found that a more infectious variant of the COVID-19 virus first identified in Britain is spreading fast enough in the U.S. that it will likely become the dominant form of the virus in much of the country by March. The agency is now recommending people wear multi-layered masks in order to slow the spread of the virus.

Democratic leadership in the Montana Legislature criticized the governor’s mask announcement in a statement, accusing him of “passing the buck on public health.”

In justifying his decision to lift the mandate, Gianforte said the state has made progress toward vaccinating “the most vulnerable citizens” by holding vaccination clinics in nursing homes and long-term care facilities. He also cited downward trends in new COVID-19 cases and deaths attributed to the virus.

The number of new COVID-19 cases reported in Montana has been generally trending downward since late November. However, the trend in the state’s official COVID-19 death count is less clear — in part because, as the Great Falls Tribune reported, 47 COVID-19 deaths in Yellowstone County were reported en masse last week as health officials completed a review of death records dating as far back as last September.

According to the state COVID-19 dashboard, Montana had as of Wednesday issued just shy of 150,000 vaccine doses and had about 41,500 Montanans fully immunized through a two-dose regimen. State officials have said previously that the dashboard doesn’t include vaccinations administered by federal agencies such as the U.S. Department of Veterans Affairs or Indian Health Service.

Gianforte, who has said repeatedly he looks forward to being able to throw his face mask “in the trash can,” did say Wednesday he doesn’t think the time for that has arrived.

“Since we’re not out of the woods yet, I will continue wearing a mask, and I encourage all Montanans to do the same to protect themselves, their loved ones and their neighbors,” he said.