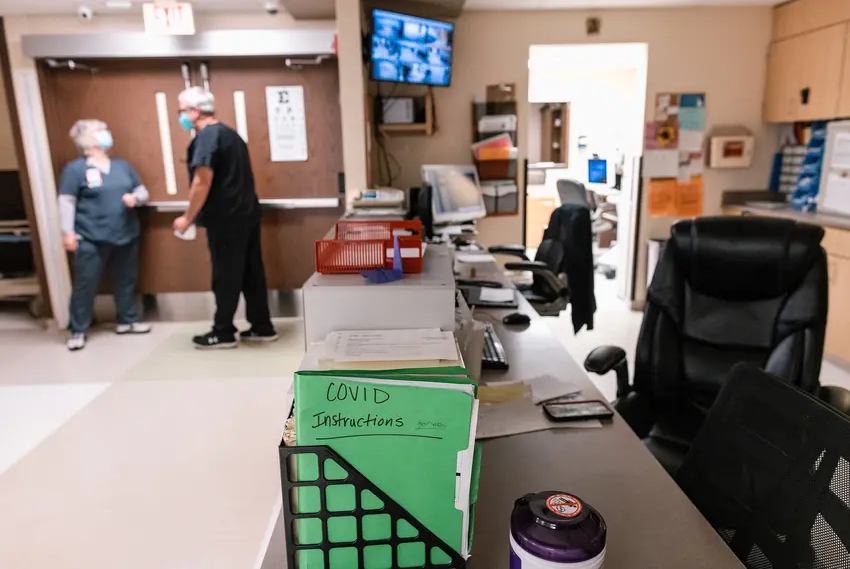 Gov. Greg Abbott announced new moves Monday to fight the coronavirus pandemic as it rages again in Texas, including asking hospitals to again put off certain elective procedures to free up space for COVID-19 patients.

Still, the governor did not back down on his refusal to institute any new statewide restrictions on businesses or to let local governments and schools mandate masks or vaccines.

Instead, Abbott announced he had written to the Texas Hospital Association asking hospitals to “voluntarily postpone medical procedures for which delay will not result in loss of life or a deterioration in the patient’s condition.” As coronavirus was consuming the state last summer, Abbott took a more restrictive approach and banned elective surgeries in over 100 counties before ending the prohibition in September.

Abbottalso announced Mondayhe was asking state agencies to open additional COVID-19 antibody infusion centers that aim to treat COVID-19 patients with therapeutic drugs and keep them from requiring hospitalization. And he said the Department of State Health Services “will be utilizing staffing agencies to provide medical personnel from out-of-state to Texas health care facilities to assist in COVID-19 operations.”

That is a reversal for the state. In July, the state told cities and counties it would not send additional health care workers to aid hospitals with the latest surge of COVID-19 patients, like it had earlier in the pandemic. Instead, state officials said, city and county leaders should dip into $10.5 billion worth of federal stimulus dollars to pay for those workers should hospitals need them.

In recent days, key coronavirus indicators have spiked to levels not seen since the winter. Texas reported 5,377 new cases on Sunday and 9,027 hospitalizations a day earlier, both on a level that tracks with the previous surge during the winter. The state’s positivity rate — the ratio of cases to tests — stood at 18.4% on Saturday, far above the 10% threshold that Abbott has previously identified as dangerous.

Vaccinations started ticking up last month, though Texas continues to lag nationally in percentage of people fully vaccinated, which stood at 44.4% as of Saturday.

As part of Monday’s announcement, Abbott’s office said he was directing state agencies to “increase vaccination availability across the state” but did not provide further details.

“Texans can help bolster our efforts by getting vaccinated against COVID-19,” Abbott said in the news release. “The COVID-19 vaccine is safe and effective, and it is our best defense against this virus.”

Abbott’s office followed up the announcement with another one saying the state was extending emergency Supplemental Nutrition Assistance Program, or food stamp, benefits for August, aimed at helping families feed themselves during the pandemic. The Texas Health and Human Services Commission is providing “approximately” $267 million in benefits for the month, according to the governor’s office.

The first announcement from the office did not show any change in Abbott’s refusal to take new statewide action on masks, vaccines or business shutdowns. He also is not shying away from his refusal to let local governments or other public entities, like schools, require masks or vaccines.

Abbott has said Texas is “past the time of government mandates” and that Texans know what to do to protect themselves on their own at this point in the pandemic.

For now, Abbott appears most focused on freeing up resources for COVID-19 patients, particularly hospital capacity. Still, after Abbott’s announcement Monday, the American College of Surgeons issued a reminder that delaying elective procedures “is not without consequences by creating more medically complex cases and significantly impacting patients’ quality of life.”

“Ultimately, the American College of Surgeons recommends that decisions to adjust surgical services up or down should occur at a local level driven by hospital leaders including surgeons and in consultation with state government,” the group said in a statement.