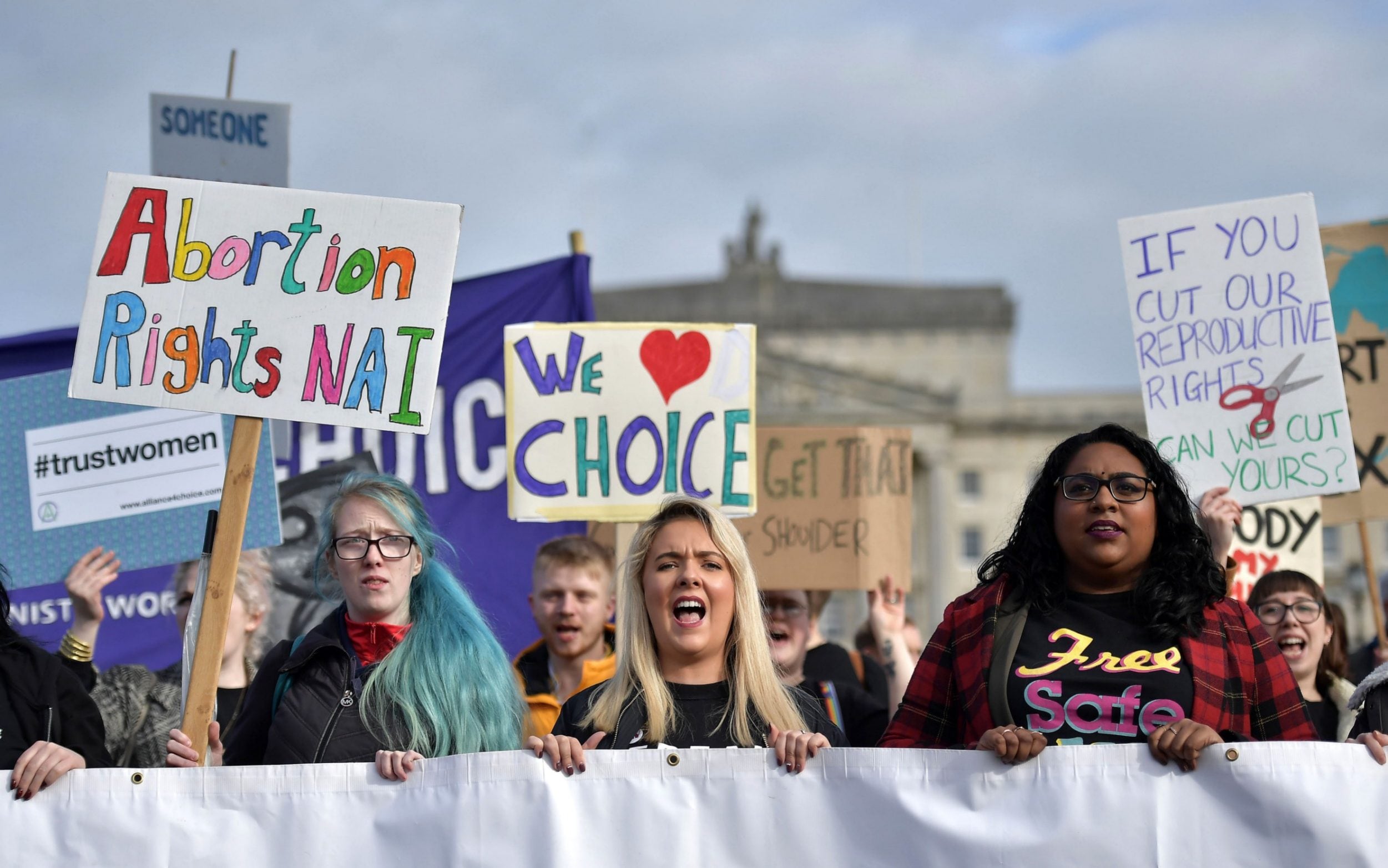 Gov. Greg Abbott signed into a law Wednesday a measure that would prohibit in Texas abortions as early as six weeks — before some women know they are pregnant — and open the door for almost any private citizen to sue abortion providers and others.

The signing of the bill opens a new frontier in the battle over abortion restrictions as first-of-its-kind legal provisions — intended to make the law harder to block — are poised to be tested in the courts.

Abortion rights advocates have promised to challenge the new law, which they consider one of the most extreme nationwide and the strictest in Texas since the landmark Roe v. Wade decision. It would amount to an outright ban on abortions, as the six-week cutoff is two weeks after a missed menstrual cycle, opponents say.

The law takes effect in September.

“Our creator endowed us with the right to life and yet millions of children lose their right to life every year because of abortion,” Abbott said in a bill signing ceremony, captured on videos posted on social media. The Legislature “worked together on a bipartisan basis to pass a bill that I’m about to sign that ensures that the life of every unborn child who has a heartbeat will be saved from the ravages of abortion.”

The governor’s signature comes just after the U.S. Supreme Court said it would hear a case concerning a Mississippi law that would ban most abortions after 15 weeks, and which could lead to new limits on abortion rights. It is the first major abortion case heard before the court’s newly expanded conservative majority, and could have far-reaching effects for Texas, where a pending bill would outlaw nearly all abortions if the Supreme Court overruled Roe v. Wade.

Senate Bill 8 was a top priority for Republican lawmakers, nearly all of whom signed on as an author or sponsor of the measure.

The bill bans abortions after a fetal heartbeat has been detected. It includes cases where the woman was impregnated as a result of rape or incest. There is an exception for medical emergencies.

Similar “heartbeat” bills have been passed by other states and held up by the courts, but Texas’ version has a twist.

Instead of having the government enforce the law, the bill turns the reins over to private citizens — who are newly empowered to sue abortion providers or anyone who helps someone get an abortion after a fetal heartbeat has been detected. The person would not have to be connected to someone who had an abortion or to a provider to sue.

Proponents of the new law hope to get around the legal challenges that have tied up abortion restrictions in the courts. While abortion providers typically sue the state to stop a restrictive abortion law from taking effect, there’s no state official enforcing Senate Bill 8 — so there’s no one to sue, the bill’s proponents say.

“It’s a very unique law and it’s a very clever law,” said Josh Blackman, a constitutional law professor at South Texas College of Law Houston. “Planned Parenthood can’t go to court and sue Attorney General [Ken] Paxton like they usually would because he has no role in enforcing the statute. They have to basically sit and wait to be sued.”

Legal experts have been divided on the strategy, and abortion rights advocates have said they plan to fight regardless.

Elisabeth Smith, chief counsel for state policy and advocacy at the Center for Reproductive Rights, which has represented abortion providers who have sued Texas officials, said it and other abortion rights organizations are “not going to let this six-week ban go unchallenged.”

Drucilla Tigner, policy and advocacy strategist of the American Civil Liberties Union of Texas, said the “governor’s swipe of a pen can’t change the Constitution.”

While the law amounts to the most extreme abortion ban in the country, “abortion is both legal in Texas and supported by the majority of Texans,” Tigner said.

Abortion rights advocates and lawyers say the new law would allow for a cascade of lawsuits against abortion providers, that would sap their time and money even if they ultimately won in court.

Family members, abortion funds, rape crisis counselors and other medical professionals could be open to lawsuits, under the broad language in the bill, according to legal experts and physicians who opposed the measure. People who sued would be awarded at least $10,000, as well as costs for attorney’s fees, if they won.

“Every citizen is now a private attorney general,” Blackman said. “You can have random people who are against abortion start suing tomorrow.”

John Seago, with Texas Right to Life, an anti-abortion organization that supported the bill, said he doubted there would be an “overwhelming number of cases on day one.”

Lawsuits might be filed by anti-abortion activists who learned through talking to the woman that she got an abortion after six weeks.

The ultimate goal, he said, is to incentivize abortion providers to comply with the law instead of fighting it in court.

They can “easily avoid all of that,” Seago said. “Have a public statement. Put it on their website that they’re not scheduling appointments after six weeks.”

The bill does not allow rapists to sue but abortion rights advocates say the wording offers flimsy protection as most rapes and sexual assaults aren’t reported and don’t result in a conviction.

Most abortions in Texas were prohibited after about 20 weeks. Pill-induced abortions were barred at 10 weeks. An abortion provider must perform a sonogram on the woman 24 hours before the abortion and give them information about medical risks, abortion alternatives and assistance available to those who follow through with their pregnancy.

More than 56,600 abortions were performed on Texas residents in 2019, according to state statistics, most of them in the first trimester.

Proponents of the law celebrated its signing.

“The Legislature and Governor prioritized this historic legislation, and with his signature, approximately 50,000 precious human lives will be saved in Texas next year alone!” said Chelsey Youman, with Human Coalition Action, an anti-abortion organization.

Texas Right to Life called the bill’s signing a “landmark victory,” but said a more comprehensive measure was still waiting for a vote in the Legislature.

“Texas Right to Life reminds our elected officials of their solemn duty to protect the lives of their citizens, especially the most vulnerable and innocent Texans in the womb. The signing of the Texas Heartbeat Act marks a historic step in the battle to protect Life,” the organization said.

Opponents of the legislation condemned its passage.

“When you factor in the time it takes to confirm a pregnancy, consider your options and make a decision, schedule an appointment and comply with all the restrictions politicians have already put in place for patients and providers, a six-week ban essentially bans abortion outright,” she said.

Amy Hagstrom Miller, head of Whole Woman’s Health, an abortion provider that has four clinics in Texas, said the law will have a “chilling effect.”

Protesters have previously falsely reported Whole Woman’s Health clinics to state health officials for allegedly having the wrong water heater permit, not following social distancing protocols during the pandemic, and other perceived regulatory infractions, she said.

The “false reports disrupt health care services and this culture of threats and accusations is designed to intimidate providers,” she said.

About 90% of women who come to Whole Woman’s Health clinics are more than six weeks into their pregnancy, she said.

Whole Woman’s Health has sued Texas over abortion restrictions, and won a 2016 case that went up to the Supreme Court.

The bill was opposed by more than 300 Texas lawyers who said it undermined longstanding rules and tenets of the legal system, including that a person must be injured to sue.

The law would also let someone file a lawsuit in their home county against an abortion clinic, and stop the case from being transferred to a different venue.

In practice, legal experts say it would be more costly and difficult for abortion providers to play legal defense before a judge hundreds of miles away, and it could let anti-abortion advocates be heard in courts that they think will be more sympathetic.

Seago, with Texas Right to Life, said it “will be interesting to see [how] the other kind of alternative avenues [handle] these debates.”

This article was originally posted on Gov. Greg Abbott signs into law one of nation’s strictest abortion measures, banning procedure as early as six weeks into a pregnancy