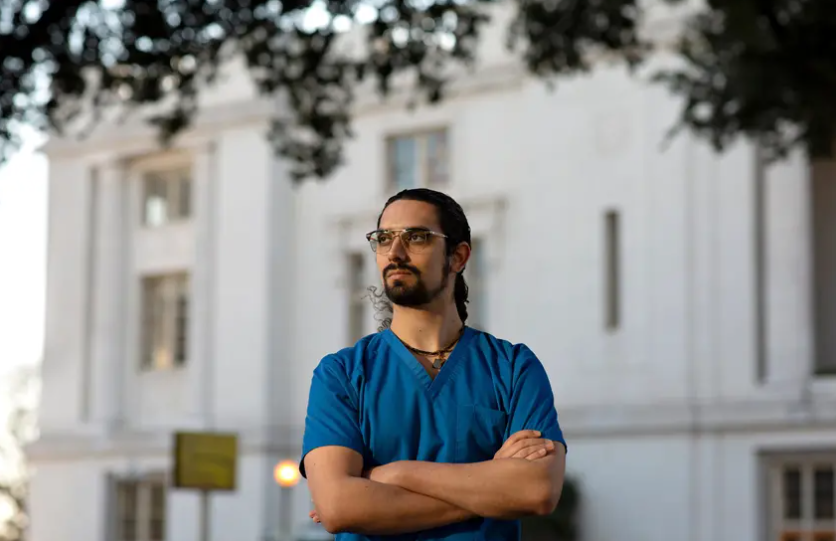 State Rep. Donna Howard was working as an intensive care unit nurse in the 1970s when a patient pulled an intravenous drip out of his arm and walked toward her. She rushed to help him — but didn’t see the metal urinal he was clutching behind his back until it was too late. He smacked her in the jaw with it, knocking her across the room.

“I was briefly stunned by the hit,” said Howard, then working at the Brackenridge hospital in Austin. “But I continued working.”

For decades, health care workers have faced rampant violence in the workplace. Now praised as heroes of the pandemic, those front-line medical workers have been routinely scratched, bitten or verbally abused by patients. Well over half of Texas’ nurses reported being subject to workplace violence in their career, according to a 2016 state study.

Nationwide, the rate of violence for health care workers increased more than 60% between 2011 and 2018, and the Occupational Safety and Health Administration has found the rate of serious violent incidents in health care is more than four times greater than for those in other industries.

“It is presumed to be a part of the job,” Howard, D-Austin, said of the violence. “That’s not OK.”

There are no federal laws that specifically target violence in nurses’ workplaces. OSHA does not require health care facilities to have violence prevention plans, though states like California and Washington have passed laws to do so. Howard has filed similar legislation in Texas that if passed this year, would place Texas in a vanguard of states that have backed similar protections for nurses.

It would require health care providers to create committees to prevent workplace violence and to offer medical treatment and other services after a violent incident. It would also bar facilities from penalizing nurses who report abuse.

“They are there to take care of us. And I think we have a responsibility to take care of them,” Howard said, adding that this year especially, lawmakers have a moral obligation to take care of health care workers who have been risking their lives throughout the pandemic.

State lawmakers have for years heard examples of the violence nurses face.

Rep. Stephanie Klick, R-Fort Worth, who has worked as a nurse, said in a committee hearing that her wrist was broken by an elderly patient and that she had to have surgery to repair it.

Cindy Zolnierek, head of the Texas Nurses Association, said a patient tried to punch her in the face on her first day as a graduate nurse. She quickly stepped back to avoid being struck.

And in 2013, an emergency room nurse named Norma Broadhurst told a panel of lawmakers she’d had a “traumatic amputation” of her right ring finger after it was bitten off by an “intoxicated spring break patient” who she was trying to help.

“I will never have my finger back to wear the ring my grandmother gave me,” she said. “Is this going to interfere with my wanting to help the next patient? … I am right-handed, everything I do involves this hand.”

That year, the Legislature strengthened the penalties for assaulting emergency room workers, putting the offense on par with harming first responders. Lawmakers later signed off on creating a grant program to find creative ways to lower the number of verbal and physical attacks against nurses. Those efforts have been focused on training, trying to quickly identify patients at high risk of lashing out, or raising public awareness about the rate of violence, Zolnierek said.

Nurse advocates say that a proactive approach is essential to stop assaults before they happen and leave health care workers and patients traumatized by the experience.

“Many members of the general public, they’re like, ‘Are you kidding me? People assault nurses?’ They don’t understand that it’s a problem,” Zolnierek said.

In Texas, more than a third of nurses surveyed for a 2016 report who did not report a recent violent incident said it was because it was “an accepted/expected part of the job” or because they did “not expect anything to change.” About a quarter of nurses — and nearly a third of those in freestanding emergency centers — said their employer was not at all or only “slightly effective” at managing workplace violence.

It’s not just nurses. Respiratory therapists, dietary aides and other health care workers all face violence. Nearly half of emergency physicians have reported being physically assaulted at work.

Dr. Theresa Tran, an assistant professor of emergency medicine at the Baylor College of Medicine, said violence is an “unfortunate commonality” in emergency rooms everywhere and something workers there have to always be “vigilant” about.

An OSHA webpage says people who work in hospitals, nursing homes and other health care facilities face “significant risks” of violence, in part because they may work closely with people who have a history of violence or are under the influence of drugs. A state report said nurses have the “highest risk” among health professionals because of how often they interact with patients.

Zolnierek said nurses may be viewed as “non threatening” and may be vulnerable to being struck because they work in close proximity to patients. There can also be outdated sex-based stereotypes of nurses — about 88% of whom are women — as being passive or doctors’ “handmaids,” said Zolnierek, though both male and female nurses experience sexual harassment from patients.

Daniel Funtong, a nurse who works in North Texas, said older patients sometimes react poorly to pain medication, in some cases threatening nurses with knives or spoons that are served with meals.

“I don’t think they understand the magnitude, because after going through… trauma or injury and then the recovery process, and sometimes that brain doesn’t function as normal,” Funtong said.

A variety of factors can spark aggression or a violent outburst from patients. The presence of needles can trigger violence, and patients who want to leave the hospital or who are frustrated with waiting could be more prone to erupt, according to researchers who analyzed a year of incident reports at a hospital system in the midwest.

In other cases, patients’ family members have lashed out if they think the health care worker isn’t doing enough to care for their loved one.

Nurses and physicians “constantly” feel threatened by patients and family members, Funtong said, and have been trained to identify crisis-type situations and alert building security if needed. He wishes police would work closely with health care facilities’ private security to more promptly intervene with violent patients.

Registered nurse Steven Powell said violent patients have left him covered in bruises, but he more regularly faces verbal assaults. Recently, a patient called him a racial slur— an occurrence that’s not uncommon for nurses, according to experts.

“When you look at the workforce for nurses, it’s a very diverse landscape,” he said. “The violence that they can experience from a verbal nature, threats due to their culture — they may keep it to themselves or not respond in the same manner that everyone would, having a plan like this that encourages reporting.”

Powell, who also works as a traveling nurse, said health care facilities he worked at in the Houston and Dallas areas were unprepared for the pandemic — and that lack of readiness extends to how they plan for violence.

“Not all facilities are taking the steps necessary to protect their staff,” Powell said.

Some 82% of Texas nurses report being verbally abused, which can include yelling, swearing and the use of hurtful words, according to the 2016 state report. Nearly half also reported physical violence like being hit, slapped or choked.

The threat of violence or abuse can take a heavy toll, leaving health care workers with injuries, psychological trauma or decreased morale. Nurses who face violence may trust their employers or coworkers less, become more guarded when treating patients or even leave the profession — while Texas faces a shortage of nurses.

“One abusive patient can negate 25 lovely patients, and it just hurts you on so many levels, more than just the physical,” said Mary Ball, a registered nurse at Parkland Health & Hospital System. Ball said a co-worker was recently bitten by a patient who drew blood, and that the hospital doesn’t provide enough information to staff or the public about safety issues.

Ball, who is still in therapy after being robbed at gunpoint in an employee parking lot almost two years ago, said she wishes more armed officers were present in and outside the hospital and said that restraints should be more frequently used to protect them from potentially violent patients.

A Parkland spokesperson said the hospital “puts out a great deal of information about safety and discusses these matters regularly in our system-wide town halls, which is open to all employees.” Police officers are also present to protect patients and employees.

The Dallas-based hospital has used other initiatives to try to reduce workplace violence. It created a free course a few years ago to raise awareness about the prevalence of workplace violence and to teach employees and nursing students how to protect themselves. It also purchased wearable alarm systems for employees that can emit a piercing noise if they need help and are not near a panic button, said Karen Garvey, Parkland’s vice president of safety and clinical risk management.

Ball said the wearable alarm wouldn’t have helped her when she was being robbed.

Workplace violence is thought to be vastly underreported among health care workers, in part because of a professional obligation to “do no harm,” and a steadfast focus on helping patients, even those who hurt them, according to experts. Some health care workers who experience violence may not want to blame or shame violent patients who are ill or affected by medication. Others may be reluctant to report violence because they view it as part of their job, fear retaliation from their employer or are deterred by the time and administrative hassle of going through the process, experts say.

They may think, “‘Nothing ever happens when I report so why should I bother?’” said Judy Arnetz, a professor at Michigan State University who for decades has studied workplace violence in the health care sector. Some health care workers may also sympathize with the patient and think they “didn’t mean to hurt me, that patient … suffers from dementia or was under the influence,” she said.

Though awareness about workplace violence has grown, there’s still a dearth of information about how frequently it erupts and affects health care workers, largely because of a lack of reporting, said Arnetz, one of the researchers who analyzed incidents at the Midwestern hospital system.

Health care workers and experts have said hospitals can add more security guards or metal detectors and instill a culture of violence prevention to help deter workplace violence. They should also better understand where violence is occurring and why. Violent outbursts have been reported more frequently in emergency rooms or psychiatric facilities, where people may be anxious, stressed, in pain or under other kinds of psychological strain, experts have said. But it can still happen in other health care settings, and workers there may be less prepared to deal with the violence.

Tran, the emergency room physician, said health care workers’ role in stabilizing patients and trying to find physical or mental issues that they can address can add a complicated layer to the violence.

“I think health care workers, especially physicians and nurses in the ER, tolerate violence more than other industries because we see ourselves in a position where we’re supposed to help patients and look past any aggressions on ourselves,” she said.

This article was originally published on Half of Texas’ nurses experience workplace violence. A Texas lawmaker says it’s time to protect them.