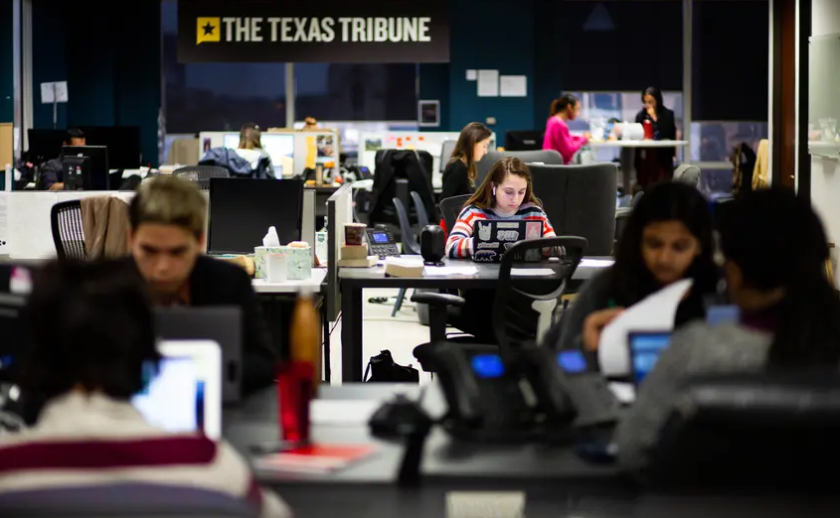 When Isabella Zou first visited our newsroom years ago, she was a local high school student who had started her own journalistic project to tell the stories of homeless Austinites. Now, she’s a Yale University student who is preparing to return to The Texas Tribune as a reporting fellow.

These incredible students — who will join us from Texas and across the country — will spend the summer working in one of these areas of our newsroom: audience engagement, data visuals, engineering, events, marketing and communications, multimedia, photography or reporting.

Most of the Texas Tribune fellowships are in Austin; one reporting fellow is typically based in Washington, D.C. Because of the pandemic, we don’t yet know whether we’ll get the chance to work with these fellows in person, but the amazing fellowship classes of 2020 — and the current spring class — have shown that it’s possible to do impressive work during a pandemic without setting foot in our newsroom.

These recent fellows produced phenomenal journalism about COVID-19, the presidential election and more. They told important, data-driven stories about the impact of the coronavirus on nursing homes and unemployment, and why Middle Eastern Texans feel left out of the census. They created important photos, videos and social media posts and played critical roles in the virtual Texas Tribune Festival.

Here’s more about the Tribune’s paid fellowship program, which is part time in the spring and fall and full time in the summer. We pair each student with a mentor and design workshops for them on topics like investigative reporting and Texas politics. We’ll add information to this page in April about how to apply for the fall 2021 program.

Madeline Badowski, a senior at the University of Texas at Austin, is the events fellow. Madeline has worked as an event coordination and marketing intern for Eventfull ATX, a marketing and communication intern for Bella by Sara and an associate intern for Wedfully Yours. She’s also been philanthropy director and communication director for the Texas Belles event planning organization.

Colleen DeGuzman, a senior at the University of Texas Rio Grande Valley, is an Austin reporting fellow. Colleen has worked as a features reporter and designer at The Monitor in McAllen, Texas, and has had internships at NBC’s Weekend Today and Ashoka’s Washington bureau. She is an NPR Next Generation Radio mentee; was a graphic designer for The Advance News Journal in Pharr, Texas; and attended Bloomberg’s business journalism fellowship program.

Farah Eltohamy, a senior at Arizona State University, is the Washington reporting fellow. Farah has worked as a politics intern for The Arizona Republic, a reporter for Cronkite News and a freelance writer for National Geographic. She’s also been a podcast editor and diversity officer for The State Press student newspaper. Farah is fluent in Arabic and proficient in Spanish.

Jason Kao, a junior at Columbia University, is the data visuals fellow. Jason has worked as a news intern at Bloomberg News, where he covered the intersection of race, labor and climate, and a graphics intern at The New York Times, where he covered U.S. immigration and protests in Puerto Rico. He was also the graphics deputy editor of the Columbia Daily Spectator.

Sophie Park, a 2020 graduate of Boston University, is the photography fellow. Sophie has worked as a photo intern for the Harvard Gazette and as a teaching assistant for visual journalism courses at BU. She was also a staff photographer for BU Today and associate photo editor for the Daily Free Press student newspaper. Sophie is the assistant executive director for the Korean American Citizens League and leads a team of contact tracers in Massachusetts.

Heidi Pérez-Moreno, a junior at the University of North Carolina at Chapel Hill, is an Austin reporting fellow. Heidi has worked as a production assistant for The California Report at the NPR and PBS affiliate KQED. She’s also a reporter and a diversity, equity and inclusion officer at The Daily Tar Heel and was editor-in-chief and social media director for The Reporter at Miami Dade College. Heidi is fluent in Spanish.

Lauren Santucci, a master’s student at Ohio University, is the multimedia fellow. Lauren filmed and produced the Frontline PBS documentary “Growing Up Poor in America” alongside director Jezza Neumann, and she has worked as a creative manager and an associate producer for WDET-FM, Detroit’s NPR station. She was also a features editor for Stereoscope Magazine at the University of St. Andrews in Scotland, where she earned her undergraduate degree. Lauren is vice president of the National Press Photographers Association at Ohio University.

Isabella Zou, a Yale University student who is taking a gap year before her junior year, is an Austin reporting fellow. Isabella, an Austin native, has worked as an inequity and disparity reporting intern for the CT Mirror and an intern for the Austin American-Statesman’s Westlake Picayune. She is editor-in-chief of the Yale Daily News Magazine and is a research intern for the Anti-Racist Teaching and Learning Collective. Isabella is fluent in Mandarin.

This article was originally published on T-Squared: Introducing our summer 2021 student fellows