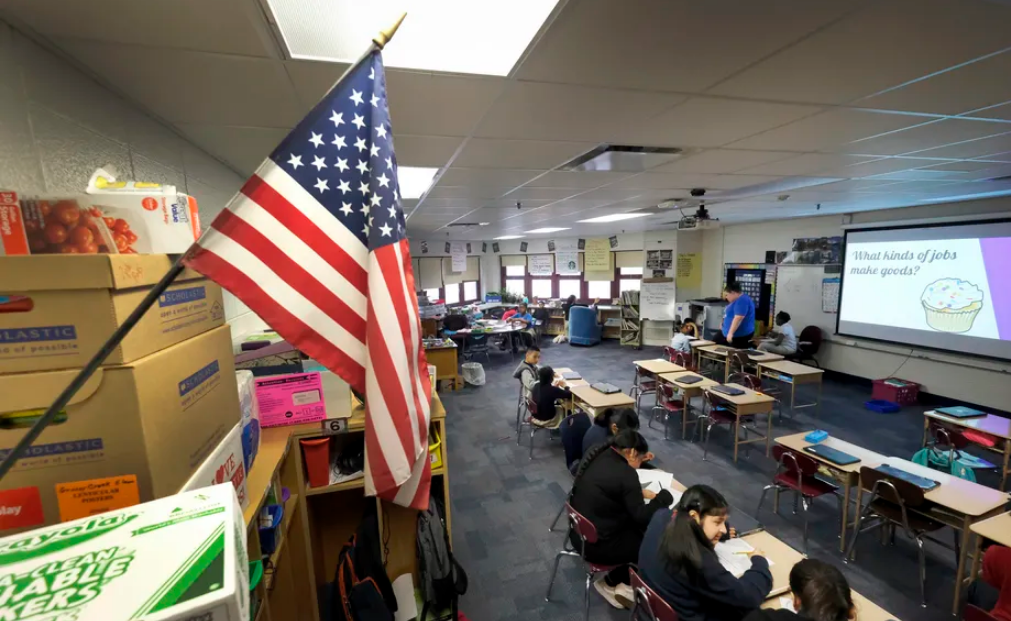 Now, however, the 16,000-student district is one of several cash-strapped Indiana school systems where leaders and community members will tackle a less common challenge: choosing how to spend a massive infusion of coronavirus aid.

The South Bend district is expecting to receive over $50 million, equivalent to about a quarter of its annual budget, from the federal stimulus package approved last month. That’s on top of about $33 million it will receive from two earlier bills.

Indiana in total will get more than $3 billion to help schools — that amounts to about 40% of what the state allocates to schools each year in the budget. That aid will be distributed to districts based on how many students in poverty they serve.

But the mind-boggling sums are one-time grants, intended in part to help students recover learning lost during the pandemic. The federal money cannot provide a long-term fix for a district that has been spending beyond its means.

So some districts will be in the incongruous position of spending big on short-term programs like summer school at the same time they make painful cuts, such as closing schools.

In South Bend, the influx of federal cash will allow it to offer students long-needed support.

“Our district needed help before the pandemic,” Chief Financial Officer Kareemah Fowler said. “There were some things that we just couldn’t afford to do.”

South Bend has a long list of plans for the federal money, including adding an hour of instruction to the school day next year, Fowler said. It will upgrade buildings to improve air quality. And it will train staff, particularly at schools that are struggling academically.

The district also plans to use the federal money to hire full-time social workers and other staff to support students at each school, Fowler said. But because the money is one-time only, funding for some of those positions won’t last, she said.

The federal boost won’t erase long-standing financial strains for South Bend and other urban Indiana districts that struggle under local property tax caps, cuts to state aid for educating students from low-income families, and decreases in enrollment that lead to less state funding.

South Bend won local voter support for increasing property taxes for education last year. But the schools will still need to make cuts to sustain the budget in the long term, Fowler said.

Districts typically spend the vast majority of their budgets on staff salaries and benefits. The federal aid all must be allocated by October 2024, making many school leaders reluctant to spend it on raises or new educators.

In the Muncie school district, CEO Lee Ann Kwiatkowski hopes to use the federal funding to provide one-time stipends to educators in recognition of the work they have done this past school year. Spending will also focus on short-term projects, such as construction, she said.

After years of financial mismanagement when the district misspent money from bonds, in 2018 the state placed the Muncie school system under the control of Ball State University. The district now has a balanced budget, but it has very limited funding to update facilities, Kwiatkowski said.

State education officials have not yet announced exactly how much each district will receive from the federal stimulus bill passed last month. But schools are expected to get roughly double the December federal allocation. Muncie schools will receive nearly $11 million from the December aid bill.

Muncie will use some of the federal money for upgrading school buildings, such as by replacing windows and ventilation systems, Kwiatkowski said. The district will also update two schools that were built in “open concept” style with large doors and few walls.

“For Muncie, this is going to be a tremendous blessing for us,” Kwiatkowski said.

The school district that stands to get the most federal funding per student is Gary. The district was so deep in debt that the state brought in an emergency manager four years ago and later stripped the elected school board of power.

Gary schools will get about $26 million in the first two rounds of federal aid. It could get close to twice that much in third round.

The influx of money could have huge implications for the district, but it is not yet clear how it will be spent.

Parents and students have a long list of improvements they would like to see, including repairs to a leaking roof, improved ventilation, and a fieldhouse for student athletes, said Tracy Coleman, a parent at West Side Leadership Academy.

Coleman argued that the state-appointed emergency manager, who is meant to be temporary, should not decide how to spend the federal relief money. The school system needs an empowered local board so that parents can have a voice in spending, she said.

The district will also get about $71 million in additional funding over eight years from a referendum recently approved by voters, and a state law gave it access to about $25 million for building repairs, renovations, and demolition.

“We have three large sources of revenue that could change our educational system for generations to come,” Coleman said. “But we have no say.”

The largest federal allocation in Indiana will go to Indianapolis Public Schools, which will receive $77 million from the first two aid bills. It is expected to receive well over $100 million from the third package.

The district’s budget is tight. As part of a campaign to win additional funding from voters more than two years ago, IPS leaders committed to dramatically cutting its spending to make it sustainable after years of shrinking enrollment.

To meet that goal, it is likely the district will need to make painful cuts — such as reducing transportation and closing schools — at the same time that it is spending the infusion of federal aid.

IPS Chief Financial Officer Weston Young has repeatedly cautioned the board not to let the surge of federal money delay it from making difficult financial decisions.

“Federal stimulus funds will mask the district’s underlying structural deficit which needs to be addressed,” he told the board in February. “We can’t lose sight of the work that we still have to do.”