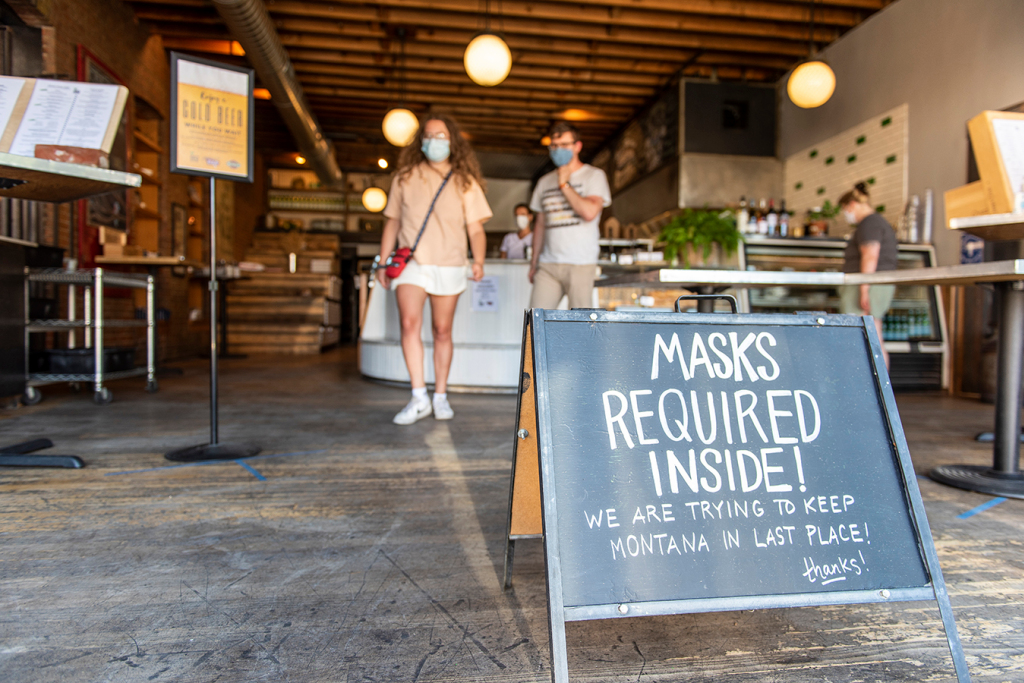 In Montana’s conservative Flathead County, prosecutors and local leaders were turning a blind eye to businesses that flouted state mask and social distancing mandates, even as the area’s COVID infections climbed to their highest levels.

When asked during an Oct. 7 press call from Montana’s capital city whether the state would step in, Gov. Steve Bullock said it was up to the locals to enforce the directives.

“I’ve never met anyone in Flathead County, especially Flathead government, that has asked me to take over their government,” Bullock said with a laugh. “It can’t all be solved from Helena.”

Just two weeks later, the Democratic governor, who was also running for the U.S. Senate, pivoted. He announced the state was taking five Flathead businesses to court for violating COVID-related mandates, asking a judge to order them to comply or close their doors.

While the state’s public mask mandate has been in place since July, enforcement had been left to local governments that largely lack the resources or the political will to do so. It’s an issue seen across the nation as public health decisions to curb the coronavirus are resisted by local leaders, business owners and individuals who are sick of pandemic rules — or too broke to continue them — or who question the state’s authority to issue them in the first place.

Yet rising caseloads have forced an evolution in the efforts to persuade people to mask up. When appealing to people’s better nature and sense of community didn’t work, Montana officials began a steady escalation: adding in guilt, then public shaming, and now attempts to punish. Still, there’s little evidence that minds are being changed, and a new Republican governor-elect, Greg Gianforte, will take over in January after campaigning more on “personal responsibility” than on state-issued mandates.

In June, Montana tried the soft approach with state public service announcements, including a video with a cowboy lassoing a calf, a hunter walking through a field and a child smiling in her mom’s arms.

“Montanans are independent. We’re also responsible, protective and committed to our families and communities,” the voiceover says before the scene cuts to a gray-haired couple wearing masks. “That’s why we’ve done so well against COVID-19.”

The ad aired June 11, a day that Montana reported 10 confirmed cases of COVID-19. As the state gradually reopened in the summer, cases began to climb, with the daily peak reaching 200 cases in July.

In the fall came the guilt trips: Hospital administrators joined the governor’s weekly press call on Sept. 30 through video conferencing and talked about overstretched resources and staffers who were exhausted by people choosing not to follow health guidelines. The new COVID case count the day of that September press conference was 423.

At the beginning of October, Bullock tried public shaming. He called out counties, including Flathead, for not enforcing mandates.

Then, after rising COVID cases put Montana among the states with the nation’s highest rates of new infections per capita, the state shifted from guiding voice to plaintiff on Oct. 22, a day after the state reported 924 new cases.

“We know how quickly this virus spreads and, as Montanans, we should always put the health of our own employees, friends and neighbors first,” Bullock said. “If businesses come into compliance, we’ll gladly drop the enforcements.”

So far, state officials have said those measures are reserved for the most egregious repeat offenders and are not a new standard.

Across the state, local officials and tribal nations are watching how far this new level of enforcement will stretch. Some have said they don’t have the means to drive enforcement alone.

Bullock has said financial aid is available for counties to educate businesses that don’t follow coronavirus health standards and, if needed, to file complaints about virus-related violations. As of Nov. 2, seven counties had followed up on that offer.

But some county health officials say more help is needed.

“We’ve done all the education we can,” said Clay Vincent of the Hill County Health Department. “We can collect all the complaints in the world, we can talk to people, we can yell at people in businesses. But then it has to go to the county attorney’s office for any type of enforcement after that, and that’s where it has stopped.”

In that county of roughly 16,000 on the Canadian border, some businesses have posted signs proclaiming the right not to wear a mask. Vincent said those stores are in the minority but noted they offer essential services like gas and food.

Health department investigations filed with the county attorney haven’t prompted enforcement of the mask mandate, Vincent said. So health officials are considering their own signs, announcing the establishment is refusing to comply with state rules to protect its employees and customers. Vincent hopes such public shaming leads to change. The county attorney’s office declined to comment and directed all questions back to the health department.

Across Montana, some businesses continue to skirt COVID rules. Last month, as Bullock announced the Flathead County court cases, he urged people to report other businesses that violate COVID restrictions via the state health department’s consumer complaint website. Within four days, more than 1,000 complaints poured in from 40 of Montana’s 56 counties.

Bullock has said the state will track the most egregious repeat offenders, though no thresholds are set for what would trigger state enforcement. Meanwhile, the site turns the complaints over to county health departments.

Tribal nations have the power to invoke emergency rules on reservations, but enforcement is another issue, even as Native Americans in Montana face disproportionately high rates of COVID hospitalizations and deaths. Some have taken steps to isolate their communities, such as Blackfeet Nation leaders’ decision to close their border with Glacier National Park. But that’s not so easy on some reservations. For instance, the Flathead Reservation overlaps four counties, and members of the Confederated Salish and Kootenai Tribes are in the minority.

“It’s unfortunate, because we as the Flathead Nation don’t have that ultimate authority in enforcement,” said Tribal Council Chair Shelly Fyant. “So we’re trying to appeal to people’s hearts from a cultural perspective.”

The tribal nation has focused its efforts on a campaign to use music, art and videos to sway people to wear a mask for the protection of those vulnerable to a risky COVID infection, especially elders.

Flathead County Attorney Travis Ahner said he hasn’t sought injunctions against businesses yet because he hasn’t seen proof that a store’s lack of mask use led to COVID cases. The mask mandate is intended to reduce spread, however, not penalize those who cause cases after the fact.

The Flathead County District Court denied the state’s request for temporary restraining orders ahead of court hearings for the businesses that allegedly overlooked mask mandates. Ahner said that shows state enforcement isn’t as simple as the governor saying he made a rule and everyone needs to follow it. Legal experts across the nation have said states have the authority to take public health emergency actions.

Some of the Flathead cases are scheduled for hearings this month. Whitefish, a destination ski town in Flathead County, didn’t want to wait and see whether the state or county would force businesses into line. The city council approved a temporary order tightening COVID restrictions over the Halloween weekend to prevent superspreader events. That created a way for the city to issue fines of up to $500 for businesses out of compliance.

“This has been pushed into our laps,” said city council member Steve Qunell. “It’s our turn to take leadership on this.”

But the city has yet to pass long-term rules to keep that power as it continues to weigh how to take on what much of the state hasn’t figured out.