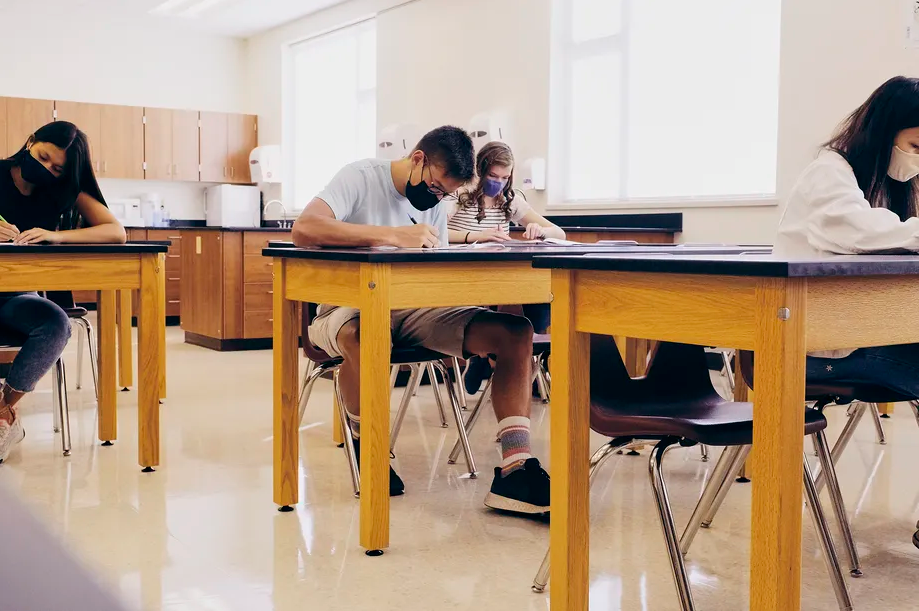 One Illinois superintendent told the state board of education that she had to request police presence in her district because the debate over masking in schools has grown so heated. A parent said mask mandates made the state feel like “Nazi Germany.” A mother of seven said she decided to homeschool rather than have her children wear masks to school.

Dozens of other speakers, testifying at the state board’s first in-person meeting after a one-month break, urged the board to reconsider the mask mandate it issued earlier this month and return reopening public health guidance to local school boards.

The speakers, who included parents and superintendents, echoed the debate roiling school board meetings around the country, as districts wrestle with issuing whether to pass mask mandates amid a new spike in COVID-19 cases and the emergence of the highly contagious delta variant.

States and school districts, meanwhile, have issued a patchwork of mask guidance. Colorado has left masking up to school districts, but Gov. Jared Polis and public health leaders are urging school districts to adopt masking requirements. In Tennessee, Gov. Bill Lee issued an executive order on Monday allowing parents of students to opt out of school mask policies. In Michigan, the state has not required masking but recommends that schools require universal masking.

Chicago Public Schools announced in late July that it would require all staff and students to wear masks inside schools regardless of vaccination status.

Before the Illinois state board started  public participation, State Superintendent Carmen Ayala said there were no  agenda items on masking because the state board is following public health guidance from the Illinois public health department, Centers for Disease Control and Prevention, and American Academy of Pediatrics.

“Masking works. It’s simple, easy and effective,” said Ayala.“And it works best when everyone in the school building wears the mask.”

At the state board meeting, almost 80 speakers — a mix of superintendents, state legislators, parents, and local school board members — signed up for the  public participation section, requiring the board to extend the public comment section. Most speakers came to talk about masks.

Many were critical of Ayala’s recent letter to local school districts about the mask mandate. The letter stated that the mask mandate was backed by law and that any public or private school going against the mandate would have its state recognition revoked, resulting in the loss of state funding and blocking school sport teams from participating in state competitions.

Several superintendents, who said they support masking, called the board’s recent letter and actions an overreach.

PJ Caposey, superintendent of Meridian Community School District 223, said there were more opportunities last year for school districts to decide how to respond to a spike in COVID-19 cases in their local communities.

“I think it was a much harder decision last year to determine whether we should be in person or not in person,” said Caposey. “But last year we were trusted to make that decision locally.”

Tonya Evans, superintendent of Central Community School District 4, said her small school district received a lot of pushback from parents when they went from a mask-optional guidance to the state’s mask mandate.

“We are in a community where we are 30 miles away from police presence,” she said. “This is not what school should look like for children, where we’re asking for police presence due to the unrest.”

Throughout the meeting, parents spoke about not wanting to send their children to school wearing masks. Some were worried about their children’s ability to recognize faces and learn visual cues.

Ruby Johnson, a mother of sevenn, decided to homeschool her children last year because she wanted them to have a consistent school year and didn’t want them to be in masks.

“Who better to develop a plan for the students being served, then people who know them. There is not one of you sitting here who personally knows our children, or our towns, our teachers or our schools,” Johnson said. “Yet, you send letters threatening to pull funding, recognition, or support if they won’t mask our kids everyday.”

Stephanie Helmut, whose four children attend public schools, fears that masks will limit her children’s ability to learn language, especially those who have speech delay or hearing impairment.

“How can children learn to make proper sounds or mouth movements as their speech develops when they cannot see anyone’s faces for them to learn?” asked Helmut.