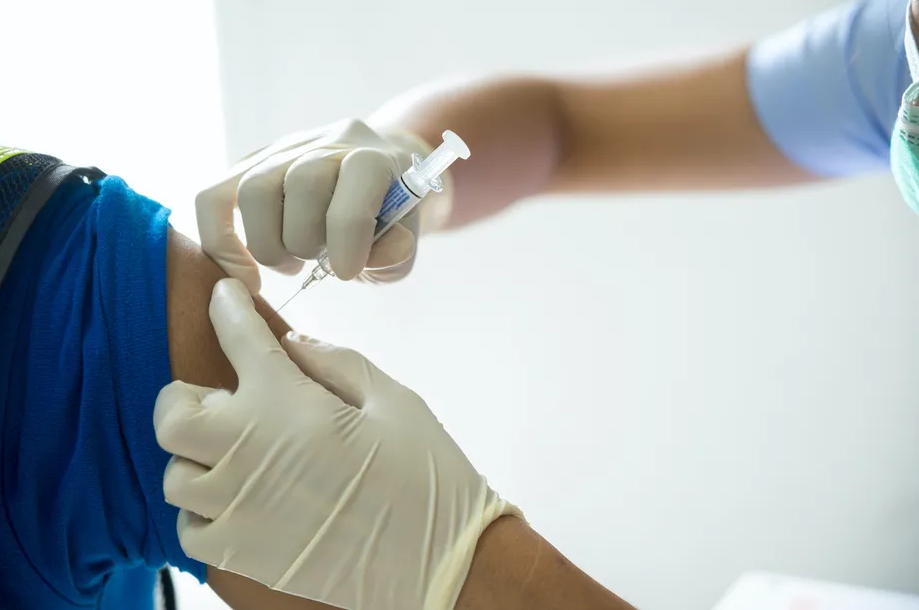 Three weeks ago, Chicago Public Schools touted the opening of three school-based sites for student vaccinations, as well as mobile clinics and home visits. Now, the district has the capacity to vaccinate up to 200 students a day, but fewer than 70 have been showing up.

Jones is part of a team of 10 young adults who have spent the past three weeks toting facts and pamphlets door-to-door and room-to-room to engage in dialogue with vaccine-hesitant Chicagoans. Based on the conversations she’s had, Jones said fear and misinformation are getting in the way. Students are learning the bulk of their information on vaccines from their parents and potentially unreliable media, allowing hesitancy to fester. Many aren’t sure what’s in the vaccine or how a dose could affect them.

“They say, ‘I got the flu shot, and I got sick off that,’” Jones said. “[They have] very limited experience with vaccines and shots, period. We try to ease that fear. ”

The campaign to get students and their families vaccinated comes as the countdown to the district’s reopening begins in earnest: Only one month remains before students are set to return to classrooms.

Yet coronavirus cases are rising sharply across the city due to the delta variant, and the window of opportunity for students to be fully vaccinated before the first day of school has closed.

Low vaccine uptake is concerning district officials and adding uncertainty to an already fragile start of school after a year and a half of disrupted learning. About three-quarters of available appointments and walk-ins are going unfilled at the district’s vaccine distribution points, which started opening the week of July 12. The vaccines are available to students and their families.

According to interim CEO Jose Torres, low demand is preventing the district from opening more school-based vaccine centers across Chicago and running them for longer hours. The district needs “the right messengers” to book those slots, officials said.

“We need teachers to tell their students to go get vaccinated. To tell their parents,” Torres said.

By mid-July, 44% of Chicago’s 12- to 17-year-olds had received a first dose of the vaccine and only 33% had been fully vaccinated, according to city data. That number includes CPS students as well as young people who attend private school or another form of education. As part of its reopening demands, Chicago’s teachers union on July 5 pushed for 80% of the district’s qualifying students to be fully vaccinated by Oct. 1 through a mix of home visits and vaccines on school grounds. The district hasn’t yet committed to a vaccination rate target.

As of June 25, about 70% of CPS staff had received a first dose of the vaccine, and 82% of teachers had gotten their first shots, according to district data. New York City on Monday mandated that all teachers get vaccinated before schools open on September 13 or be tested weekly. Chicago hasn’t passed a teacher vaccine mandate yet.

After a person receives the first shot, it takes at least five weeks to build maximum protection from the virus: they must wait three weeks between their first and second doses, and two weeks after their second dose for the vaccine to act at its full potential. According to that timeline, July 26 was the last day a student could have received their first shot to be fully vaccinated by the first day of school.

The district had pledged to hire teens to conduct vaccine advocacy alongside other community-building activities through its Summer Kickback Series, but Jones says beyond her own team, she hasn’t met any other youth ambassadors.

Plenty of CPS parents are canvassing through city initiatives to encourage vaccinations, though. At a mid-July vaccine canvassing event in Bronzeville, Breakthrough Urban Ministries contact tracing supervisor Maya Johnson said through her advocacy, she’s found herself walking between two worlds. She’s vaccinated, and she’s pushing for other residents to follow suit, but her 18-year-old son has opted not to get a shot.

It’s a tricky tension. She understands that perceived risk will deter some from ever getting their shots. But that gap means it’s even more important for parents to get their shots, to ensure they don’t bring the virus back home to their children.

“We have a responsibility to the community,” Johnson said.

She’s hopeful vaccination rates will balance out enough to shield Chicago from the highly infectious delta variant. In the meantime, she’s leading her vaccine outreach with compassion. It’s all she can do.