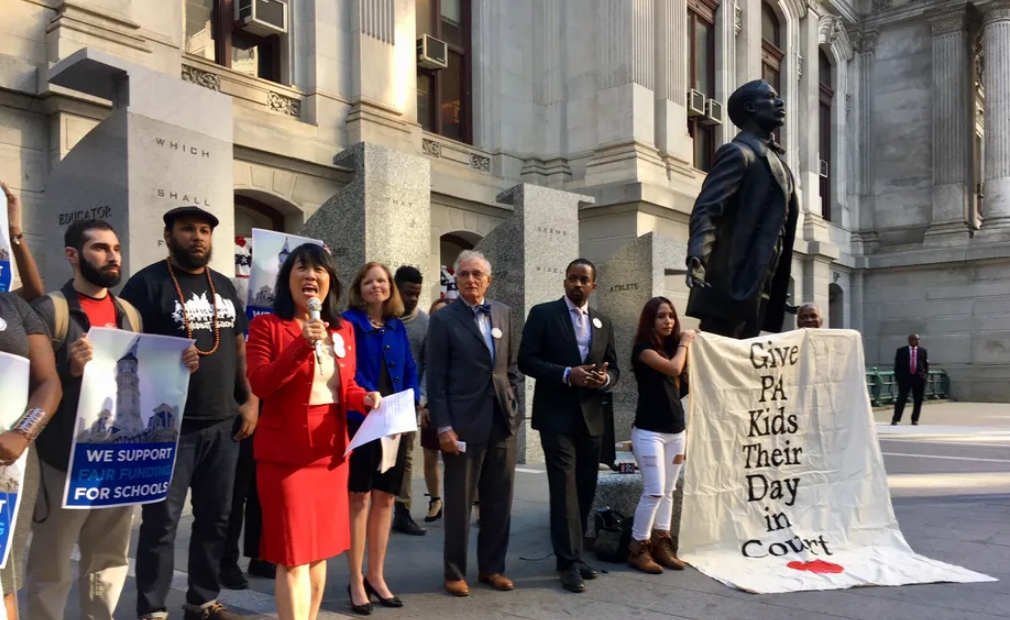 As a trial nears in a landmark fair funding case, Republican legislative leaders want to block evidence that Pennsylvania’s Black and Hispanic students fare worse on traditional measures of academic achievement than their white peers.

At a Wednesday hearing, attorneys for House Speaker Bryan Cutler and Senate President Jake Corman told Commonwealth Court Judge Renée Cohn Jubilirer that the evidence is irrelevant because the plaintiffs in the case are not alleging intentional racial discrimination.

Patrick Northen, who represents Cutler, accused the other side of highlighting the racial disparities in educational outcomes to “appeal to the sympathies of the court and the court of public opinion.”

Six school districts, joined by several parents and civil rights groups, filed the suit nearly seven years ago against the state government. They allege that Pennsylvania’s school funding method violates its state constitutional mandate to provide a “thorough and efficient” system of education for all students, and denies them their rights under the “equal protection” clause.

Those in districts with high poverty rates and low property wealth have been shortchanged, the plaintiffs contend, as Pennsylvania’s system puts much of the funding burden on local taxes. That has led to some of the biggest gaps in per-student spending between rich and poor districts of any state in the country.

Despite adopting a fair funding formula in 2016 that would distribute state education aid based on poverty rates, student needs, local property wealth, and median incomes, the legislature has not applied the formula to most of the funds it distributes.

Black and Latino students make up about a quarter of the state’s K-12 population, but half of Black students and 40% of Latino students attend school in the poorest fifth of the state’s districts, according to the plaintiffs. They say the relative lack of resources results in larger class sizes, fewer qualified teachers, more buildings in disrepair, and fewer opportunities for after-school activities, including sports, along with other disadvantages that contribute to worse educational outcomes for students of color.

But Northen said this case is about students in districts where income and property values are low — not about race. “I don’t think you can say because certain racial or ethnic groups disproportionately reside in those districts, that somehow provides evidence of the complaint they have filed,” he said.

Jubilirer questioned Northen on this, wondering why the plaintiffs cannot focus their case “on an identifiable class of students who reside in school districts with low income and property values.” Later she added: “In a vacuum, at this point for me to try to limit how evidence can or cannot be presented or what might be said or not said about that evidence at trial is challenging.”

Attorneys for Cutler and Corman also said that much of the evidence on record dates back to the original court filing in 2014, and they need additional information and data on recent developments, including the impact of COVID-19 on districts’ ability to serve their students.

Representing the plaintiffs, the Education Law Center’s Maura McInerney said this demand is a delay tactic. She noted that many more recent depositions and interrogatories provide updated information on the conditions in low-wealth school districts.

“It’s clear the demands of respondents [for updated information] will never end,” she said. Meanwhile, “the education of hundreds of thousands of students is at stake.”

Kenneth Huston, president of the NAACP Pennsylvania State Conference, one of the plaintiffs, said he was “shocked” by the motion to preclude any evidence of the system’s impact on children of color.

“We are hopeful that the motion will be dismissed, and that all issues relevant to fair funding for all Pennsylvania schools will move forward,” Huston said in a statement. “Our fight for justice on this issue is one deeply embedded in our state constitution and civil rights laws, and one we do not take lightly.”

There has been continuous legal activity and delays in the case, including earlier attempts by legislators to have the case thrown out. It is the latest in a series of fair funding cases brought in Pennsylvania over the past 30 years and the only one that has gotten this far.

In April, Jubilirer scheduled the trial to begin on September 9.

On Wednesday, she did not indicate when she would rule on the latest motions.

This article was originally posted on In landmark school funding case, Pennsylvania lawmakers try to block evidence of racial disparities